Without the Resurrection, We've Got Nothing - Seedbed
close
Menu 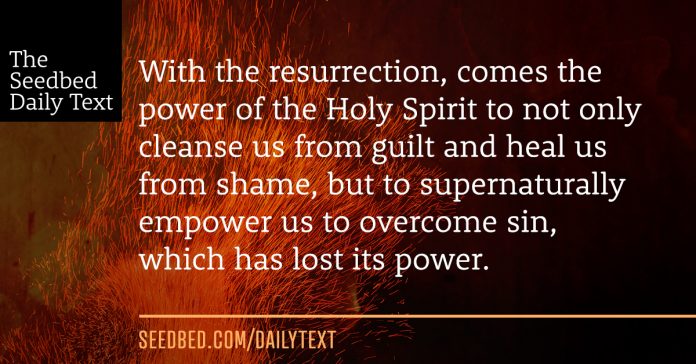 4 But when they looked up, they saw that the stone, which was very large, had been rolled away. 5 As they entered the tomb, they saw a young man dressed in a white robe sitting on the right side, and they were alarmed.

6 “Don’t be alarmed,” he said. “You are looking for Jesus the Nazarene, who was crucified. He has risen! He is not here. See the place where they laid him. 7 But go, tell his disciples and Peter, ‘He is going ahead of you into Galilee. There you will see him, just as he told you.’”

8 Trembling and bewildered, the women went out and fled from the tomb. They said nothing to anyone, because they were afraid.

Though the story of Jesus be anchored in human history, were Jesus not raised from the dead we would probably have no idea he ever existed. Chances are he would not have even made the history books. Though his teachings resonated depths of truth unheard before by human ears and though he performed astonishing miraculous signs and though he died a cruel, unjust death at the hands of Jewish leaders and Roman authorities, the story of Jesus would be just that—another story among the now millions of stories in the annals of history. The historical account of Jesus life and death is now known to us only because of the gospel or the “good news” of his resurrection from the dead. Why would Jesus matter more than any other historical figure who said and did amazing things?

This cannot be overstated. Paul said it emphatically in his letter to the church at Corinth.

And if Christ has not been raised, our preaching is useless and so is your faith. 1 Corinthians 15:14.

The resurrection of Jesus is the upending of death, which is the curse of sin, which is eternal alienation of the creature from the Creator, which is the fundamental inescapable problem of the human race.

For since death came through a man, the resurrection of the dead comes also through a man. For as in Adam all die, so in Christ all will be made alive. But each in turn: Christ, the firstfruits; then, when he comes, those who belong to him. 1 Corinthians 15:21-23.

Jesus’ life, his words, deeds, miracles, signs, suffering and death are all known to us because he is raised from the dead. This is why he is the way and the truth and the life and the exclusive savior of the human race and the entire Creation and the Lord of Heaven and Earth. No one else before or since rose from the dead. Sure, history is littered with true stories of miraculous resuscitations, but there are no resurrections from the dead, save one. Everyone who has ever lived has died and in one form or another, been buried. Only one has died, been buried and on the third day raised from the dead.

If you had cancer and a doctor told you there was only one known cure for your form of cancer, what would you do? Would you want to debate the injustice of this exclusive claim? No! You would thank God the terminal nature of your life could be extended beyond the terminal nature of your cancer. You would ask the doctor to treat you with the cure. So why is it that people bristle at the statement that Jesus Christ is the only known cure to the cancer of sin and the curse of death? He is not withholding this cure (i.e. salvation) from anyone but offering it freely to all who will receive it. What news could be better than this? Because of his resurrection from the dead, not only do we know Jesus can cure the cancer of sin, we know he has actually reversed its consequences (i.e. death). In all of the history of the world and in all of eternity to come, nothing is more astonishing than this. This, my Daily Text friends, is why men and women have given their lives to go to the ends of the Earth for over two thousand years now to share this Gospel with anyone who will hear and receive it.

Spirit of the Living God, fall afresh on me. Lord Jesus, we know you because you are risen from the dead. Teach me the centrality of your resurrection to my own faith, not as a theological doctrine but as the source and substance of my life. Melt me. Mold me. Fill me. Use me. For the glory of your name, Jesus. Amen.

So where does this challenge your faith today? Where do you feel any pushback?