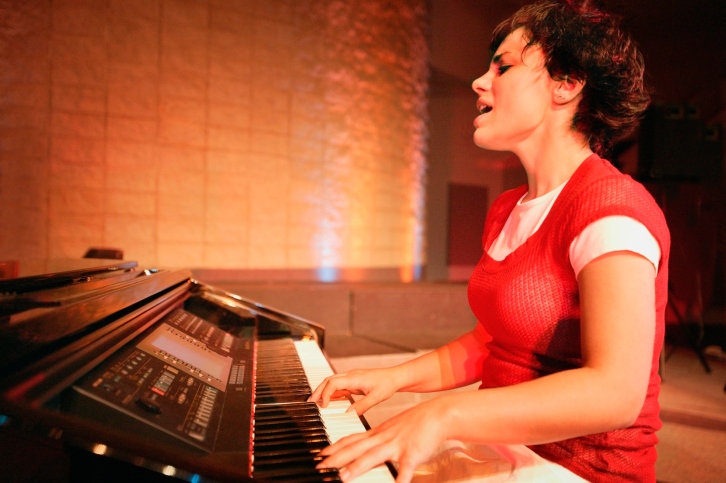 Worship and Christian education are often kept separate within the church. We have the Sunday school, where generally a lay person teaches a carefully prepared lesson from the Scriptures, and the sanctuary, where a worship pastor ushers people into the presence of God through rhythms and melodies symbolic of worship in heaven. As some would argue, both serve different functions, one for instruction and learning, and the other for worship. In reality, however, they are not all that different. The worship leader is a kind of catechist whose purpose is not only to usher people into the presence of God, but also to instruct them in His truth.

What is a catechist? A catechist is one who teaches the catechism, or the essential doctrines of the Christian faith (a catechumen is one who learns from the catechist). Throughout history, catechesis served as the primary way in which the church was educated in the unique doctrines of the Christian faith. As I’ve written before, catechesis is experiencing a revival in evangelical circles (“Redemptive Catechesis”), and is a perfect antidote to the theological apathy of many in the church today. I believe catechesis proclaimed through worship can invigorate a generation of Christians who would otherwise be doctrinally illiterate and lacking spiritual fruit.

If we add the responsibility of catechesis to the position of a worship leader, I think this will dramatically alter the way we choose (or write) the kinds of songs we use in worship, and the way in which we approach these times of worship.

In order to fully grasp the contours of this kind of thinking, I would like to look at the Psalms as a form of catechesis, and look at the example of Charles Wesley as a theologian who expressed his theology through songs. By viewing the worship leader as a kind of catechist, I believe we can form disciples who are thoroughly grounded in the faith and love and worship God wholeheartedly.

When we read through the Psalms, we are given a glimpse into the rich theology of Israel, especially Yahweh’s holiness their unique relationship with him. We are given a rich understanding of how Yahweh’s law is to be viewed and cherish (Ps. 1, 19, and 119), Yahweh’s commitment to justice (Ps. 82), His undying love for the people of Israel (136), and His protection of His people from their enemies (Ps. 61 & 91). In evangelical circles, we tend to forget that these were primarily used as worship and prayer texts, set to melodies and used in worship by the Hebrews. However, these Psalms are also theological in nature, and invited the people of Israel to contemplate the character of Yahweh, and hopefully inform the way they conducted life with others.

The Catechism of the Roman Catholic Church beautifully describes the Psalms as “a mirror of God’s marvelous deeds in the history of his people,” and “recalls the saving events of the past, yet extends into the future, even to the end of history; commemorates the promises God has already kept, and awaits the Messiah who will fulfill them definitively” (2586). Christians throughout history have based several hymns and choruses upon the Psalms because of their strong theology (Christology, in particular) and resonance with human experience. Famously, the battle hymn of the Reformation, Martin Luther’s “A Mighty Fortress is Our God,” is based on Psalm 46.

Thus, it can be said that the Psalms can be viewed as a form of catechesis. This begs the questions: What would it look like for worship leaders to be contemporary Psalmists, reflecting on the mysteries of salvation, anxiously awaiting the Second Coming of Christ, and teaching the church not only how to worship, but who they should be worshiping?

In the 1700’s, Charles Wesley, brother of John Wesley and a patriarch of Methodism, penned such famous hymns such as “And Can it Be?” and “O For a Thousand Tongues to Sing,” and is often referred to as the “Poet of Methodism.” Charles wrote over 6000 hymns after his conversion, many of which are still used today across various denominations. When you read these hymns, you gather the sense that Charles was seeking not only to provide the church with expressions of worship and praise to God, but also to educate the church in the mysteries of her salvation. In fact, when discussing the Wesley brothers, we often forget that Charles was trained in the classical languages and literature, just like John, and was ordained as a priest in the Church of England in 1735. He spent time in the United States as a missionary before returning to his home England to pursue parish ministry. Although Charles is known for his theologically-rich hymns, he was primarily a pastor and theologian.

Wesley’s example is one to ponder when thinking about the responsibilities and priorities of the contemporary worship leader. What would it look like for worship leaders to view themselves as theologians whose method of sharing doctrinal truth is through the conducting of worship services, as opposed to worship leaders who happen to know a thing or two about theology?

Worship leaders are endowed with the task of creating space for the people of God to meet and worship Him, but also with that of helping the congregation understand who their God is, informing their theology and deepening their understanding of the character of God. Just as the Psalms melodically transmitted the history and theology of their faith, and Charles Wesley’s hymns flowed from his theological prowess, so worship leaders should pay rigorous attention to the ways in which they form their congregations in doctrine.

I would like to challenge the worship leaders out there. Are you choosing songs for your congregation simply because they are catchy, and used by popular mega-churches, or are you choosing songs that are dripping with theological truth and teach your congregation the truths the church have always held? Also, do you view your role as a worship leader as a merchant of “trendy Christianity,” or do you view your role as that of a theologian shaping and molding the thoughts and affections of those under your pastoral care? I believe that if we widen the role of the worship leader to be a theologian vitally concerned with the theological literacy of congregations, we can shape a generation of Christians whose minds and hearts are attuned to the mind and heart of God. If we can envision worship time as a conduit for catechesis, we can further bridge the gap between what we know and who we love.