Would the Real Followers of Jesus Please Stand Up? - Seedbed
close
Menu 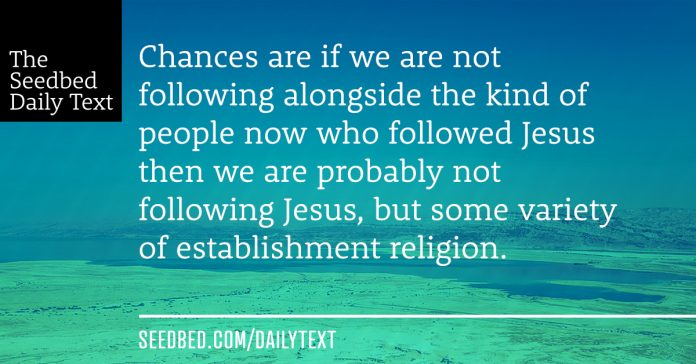 “Stop grumbling among yourselves,” Jesus answered. “No one can come to me unless the Father who sent me draws them, and I will raise them up at the last day. It is written in the Prophets: ‘They will all be taught by God.’ Everyone who has heard the Father and learned from him comes to me. No one has seen the Father except the one who is from God; only he has seen the Father.

It all seems to be coming undone. Jesus finds himself in a circle of doubters, scoffers, and accusers. We have gone from multiple awe-inspiring miraculous signs to this:

They said, “Is this not Jesus, the son of Joseph, whose father and mother we know? How can he now say, ‘I came down from heaven’?”

If we are honest, and sympathetic at all to those eyewitnesses of all these happenings, it all does seem a bit incredulous. It is one thing to be impressed by the magnitude of the signs Jesus performed. It’s a big leap from there to buying into the claim that he “came down from heaven.” Right? Maybe if he was from out of town, but not this Nazarene we all know of. Let’s get something straight.

It’s a long leap from then and there to here and now (and a stretched analogy), yet I want to pose the question to us who find ourselves somewhere in between the power players and the peasants: Who are we following?

We can claim to follow Jesus, but chances are if we are not following alongside the kind of people now who followed Jesus then we are probably not following Jesus but some variety of establishment religion. I think Jesus is ever clarifying who his followers are and aren’t. He is as confrontational as he is comforting. The only way in is by opting in. As we will soon see, many choose to opt out, if they were ever really in in the first place. Let’s put a pin in it there today.

Abba Father, we thank you for your Son, Jesus, who mercifully exposes us and graciously welcomes us to come closer. We confess, all too often we want to follow him while keeping our distance from so many of his followers. Come, Holy Spirit, and convince us that we are them in the eyes of God. We pray in Jesus’ name, amen.

1. How do you want to push back on my point today?

3. What questions does today’s entry raise for you?