You Are Spoken For - Seedbed
close
Menu 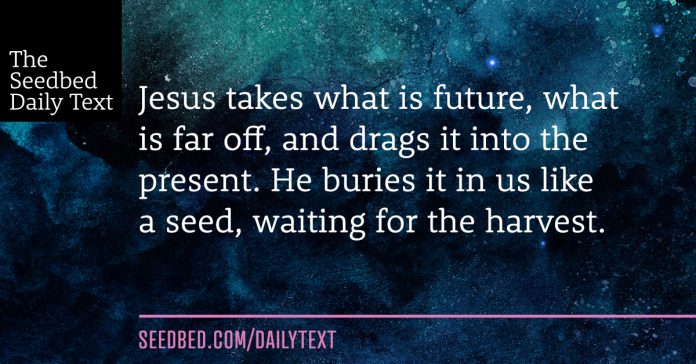 Ruth 4:14-17
14 The women said to Naomi: “Praise be to the Lord, who this day has not left you without a guardian-redeemer. May he become famous throughout Israel! 15 He will renew your life and sustain you in your old age. For your daughter-in-law, who loves you and who is better to you than seven sons, has given him birth.”
16 Then Naomi took the child in her arms and cared for him. 17 The women living there said, “Naomi has a son!” And they named him Obed. He was the father of Jesse, the father of David.

Several years ago we went to hear our friend John in concert, singing songs from his native Kenya. One song in particular made its mark on me. As he sang from somewhere down in the deepest part of his soul, the sound had this ancient timbre to it, while the spirit of his dance could only be characterized as freedom.

A single word came to mind as I watched him: Joy. It was on his face, in his voice, all over his dance. When he translated the lyrics, I suddenly understood why. It was a traditional wedding song. The chorus said, “He is hers. She is his.”

There is joy in knowing you are spoken for, joy in receiving love and giving it in return. It is this kind of joy that we find at work in the Old Testament story of Ruth.

Ruth was the daughter-in-law of Naomi. Having both lost their husbands, they were abandoned and alone. Two widows with nothing in the world but each other. Their situation was so desperate, Naomi (which can mean ‘beautiful’) wanted to change her name to Mara (which means ‘bitter’). From beautiful to bitter. That was their storyline. And they were convinced that their story was over.

But in this sweeping mystery of redemption, the end is often an unexpected beginning. Or, as the poet T. S. Eliot put it, “The end is where we start from.”

Ruth meets Boaz, an honorable relative whose story seemed stalled as well. Through a divinely directed turn of events, he takes Ruth as his wife. He spreads his protection and provision over her, and together they give birth to a son.

In the end, Ruth, Naomi, and Boaz all find a new beginning. Boaz becomes the great-grandfather of King David. Ruth, a foreigner, finds herself in the line of Israel’s Messiah. And Naomi finds the beauty in life again. The Author takes our stalled stories and bends them toward His purpose and glory. Together they become a pivotal chapter in the Advent journey, their unexpected joy foreshadowing our own.

The story of Ruth is about much more than the marriage of this man and this wife in ancient times. It is about the grand narrative of the gospel. God choosing you as His own. The joy in knowing that you are not abandoned, you are desired. You are not forgotten, you are redeemed.

You are spoken for. And your story is not over yet.

P.S. The story of Ruth is not about the search for a soulmate or encouragement to those waiting for marriage to happen to them. Let’s celebrate marriage for the gift that it is, but too often the Church gets trapped in tired narratives about singleness as only a season and marriage as a sign of spiritual arrival. We need to honor the journey of those who choose the single life and embrace celibacy as a vow of holy surrender. If that describes you, and you’ve felt overlooked or marginalized by the Church, then let me say I’m sorry. And please hear that your story matters. Not the story someone else sees for you. The story you are in right now.