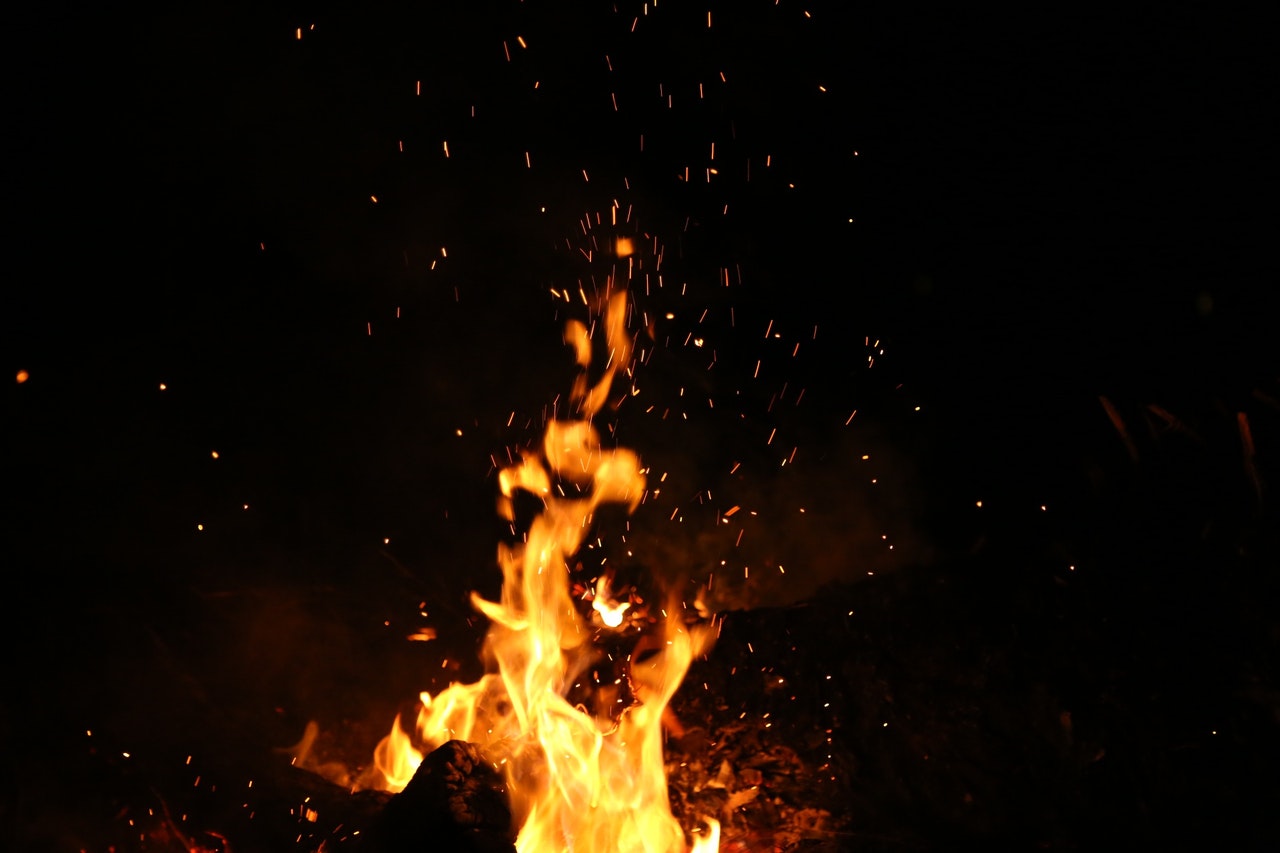 A key feature of Christ’s fulfillment of the Old Testament is that he would come and be the final high priest. This emerges in the book of Genesis in a rather unexpected way. Genesis 14 opens with the account of a regional conflict that pits five local kings against four other kings who oversee small areas of the region. The four kings defeated the five kings, who fled with all their men, allowing Kedorlaomer and his allies to capture everything—cattle, sheep, women, and children—anything and everything. In the ancient world these were considered the spoils of war since no soldier was paid for his service. You may recall that Abraham’s (Abram at this point in the story) nephew Lot had decided to live in Sodom (see Genesis 13), which was a notoriously wicked city. Sodom was one of the little kingdoms defeated in this conflict, so Kedorlaomer and his allies had captured Abraham’s nephew Lot and taken all of his belongings. Abraham heard that his nephew had been taken captive, so he took 318 of his best-trained men and set out on a hundred-mile pursuit and finally overtook them way up in the north. Abraham knew he didn’t have the forces to defeat them in a pitched battle, so he divided his men to attack them at night and routed them. The fleeing kings abandoned their spoils, and Abraham recaptured everything that had been taken. He returned home with his nephew Lot and his possessions, and all the captured slaves and livestock.

In Genesis 14:18 a very odd thing happens. It is so odd that the Jewish people ruminated over this for centuries. A man named Melchizedek, who was not a part of this conflict, comes to Abraham. There are six things about this encounter that were considered quite strange.

2. He is the king of Salem, which means “peace” and is an early reference to what would later be called Jerusalem.

3. He is both a king and a priest. In verse 18 he is called king of Salem and “priest of God Most High.” Israel would have kings and priests, but never in one person. The kings came from the line of Judah, but the priests from the line of Levi. This is very strange, indeed.

4. He emerges with no calling card or proper introduction. He just comes out of the blue. Everybody knows, even the people that have never actually read the Bible, that the Scriptures are full of genealogies, which tell how a certain person begat a person who begat another person, and so forth. Family lineages (who you are, who is your daddy, and where do you come from) were very important things in the ancient world. It was like your calling card. No one said, “Hello. My name is so-and-so.” Rather, they said, “Hello. My name is so-and-so, the son of so-and-so, the grandson of so-and-so, who was victorious in this or that battle, or who performed some great feat.” Everyone was connected. There was no personal identity or personal autonomy as it is known in the modern world. It is because of the absence of information about Melchizedek that the Jewish people speculated quite a bit about who he might have been. We don’t know who his father or mother was, nothing of his genealogy, either his ancestors or progeny, and we don’t even know how old he was.

5. He brings out bread and wine and blesses Abraham, not the other way around. Bread and wine are the primordial elements of life that would someday reemerge at the Passover and at the Eucharist. Melchizedek offered these gifts and this blessing by invoking the name of God Himself, El Elyon, a title that is used twenty-eight times in the Old Testament: “Blessed be Abram by [El Elyon] God Most High, Creator of heaven and earth. And praise be to [El Elyon] God Most High, who delivered your enemies into your hand” (vv. 19–20).

6. Abraham tithed 10 percent of all the spoils of war to Melchizedek. Genesis 14:20 records that “Abram gave him a tenth of everything.” It was customary to tithe 10 percent of the spoils to a king. The great patriarch Abraham, the fountainhead of monotheism and one of the most influential people in the history of the world, was tithing to this unknown priest-king named Melchizedek.

Biblical References Regarding a King-Priest

Psalm 110
The memory of this encounter stays with the Jewish people for a thousand years—all the way to the time of David. David, as you know, wrote many of the Psalms, several of which are known as coronation psalms (i.e., psalms to celebrate the coronation of a king). In Psalm 110, David seems to prophetically prefigure not merely his own son’s coronation, but also great David’s greater Son, the true messianic king who was to come and redeem Israel. Psalm 110 is a coronation psalm for a king, and yet it extols the figure as a “priest forever, in the order of Melchizedek” (v. 4). For a people who only knew of the order of Aaron and the Levitical priesthood, this meant that the prefigured Messiah would be both king and priest. David is aware that this is a major dilemma that must be resolved. How can the Messiah be both high king and high priest? Judah is the kingly line; Levi is the priestly line. The two lineages are separate, so how can the Messiah fulfill both? But David remembers the story of Melchizedek from millennia earlier. In Psalm 110, David hints at the solution by stating that there was a priesthood that was earlier than the tribe of Levi which dates back to Abraham, who is the great-grandfather of all the tribes. It is in Psalm 110 that we learn of the order of Melchizedek.

Zechariah 6
This hope appears again in Zechariah 6:9–15. There the Lord instructs Zechariah to take the high priest, whose name, amazingly, is the Hebrew name for Jesus—Joshua—and to declare that his name is the Branch and that he will rebuild the temple, the dwelling place of God, and will be clothed with majesty and sit on a throne. He will be a priest on the throne, bringing harmony between the two: the kingship and the priesthood. Again, in Israel, no one could ever be both a king and a priest. Abraham’s grandson Jacob had twelve sons who became the twelve tribes of Jacob—two of his sons were Judah and Levi. It was from Judah that the kings would come, and it was from Levi that God would raise up the priests. The sons of Levi and the sons of Judah were prohibited from intertribal marriage, so no one—even the Messiah it seemed, could become both a priest and a king.

Hebrews 7
Another thousand years go by and the writer of the book of Hebrews explains the whole thing with clarity. He is seeking to explain how Jesus can serve as the great high priest of the Christian faith even though he is from the tribe of Judah: “For it is clear that our Lord descended from Judah, and in regard to that tribe Moses said nothing about priests” (Heb. 7:14).

The book of Hebrews goes to great lengths to explain that there was an earlier priestly order that precedes and trumps the tribe of Levi—the order of Melchizedek! He then tells us all the ways this priesthood is superior to the Levitical priesthood. There are three main reasons.

The Superiority of Melchizedek’s Priesthood

Second, Abraham tithed to him, not the other way around. According to Jewish law, everyone tithed to support the Levitical priesthood because the Levites were not given their own territory. But Abraham tithed to Melchizedek and since all of Abraham’s descendants are in his loins—in his body—then vicariously the entire tribe of Levi (Abraham’s great-grandson) was there, tithing in Abraham. The lesser always tithes to the greater, and so the whole Levitical priesthood, through Abraham, was tithing to the superior priesthood of Melchizedek.

Third, the priesthood of Melchizedek is greater than the Levitical priesthood because of the character of the two parties involved. The Levites were themselves sinners. They had to sacrifice for themselves before they could sacrifice for the sins of the people, just as ordained ministers receive Communion before they give it today. This is not merely symbolic solidarity, but the declaration that ministers and priests are also sinners. But Jesus was a priest without sin, and not because of some human ancestry or lineage, but because of the righteous indestructibility of his life!

Melchizedek is a type of Christ who demonstrates how Jesus Christ is both King and Priest. We have already celebrated how Christ is the second Adam, and here we see Christ as the Great High Priest. All the priests of the Old Testament were prefiguring this Great High Priest.

In Jesus Christ we have the complete fulfillment of the whole Jewish priesthood. Indeed, the whole priesthood prefigured the one true High Priest who was to come, Jesus Christ. In the old order, people had to confess their sins to a priest. But with Christ as our High Priest, we can boldly and directly enter into the glorious presence of God (Heb. 10:19–22). Jesus is the intermediary who stands in the gap and intercedes for us, representing us before God as our Great High Priest! 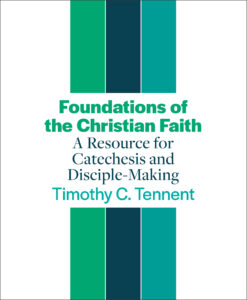 This is an excerpt from Timothy Tennent’s book, Foundations of the Christian Faith: A Resource for Catechesis and Disciple-Making. The journey of Christian discipleship can only be embarked upon with a sure foundation under foot. For ages the church has provided a tool set of basic doctrines, ethics, and ordinances through which a child or convert could be initiated into ever increasing Christlikeness. This process is called “catechesis” (to sound down, or echo) and it has traditionally been a teaching exchange between a seasoned Christian and a new believer.