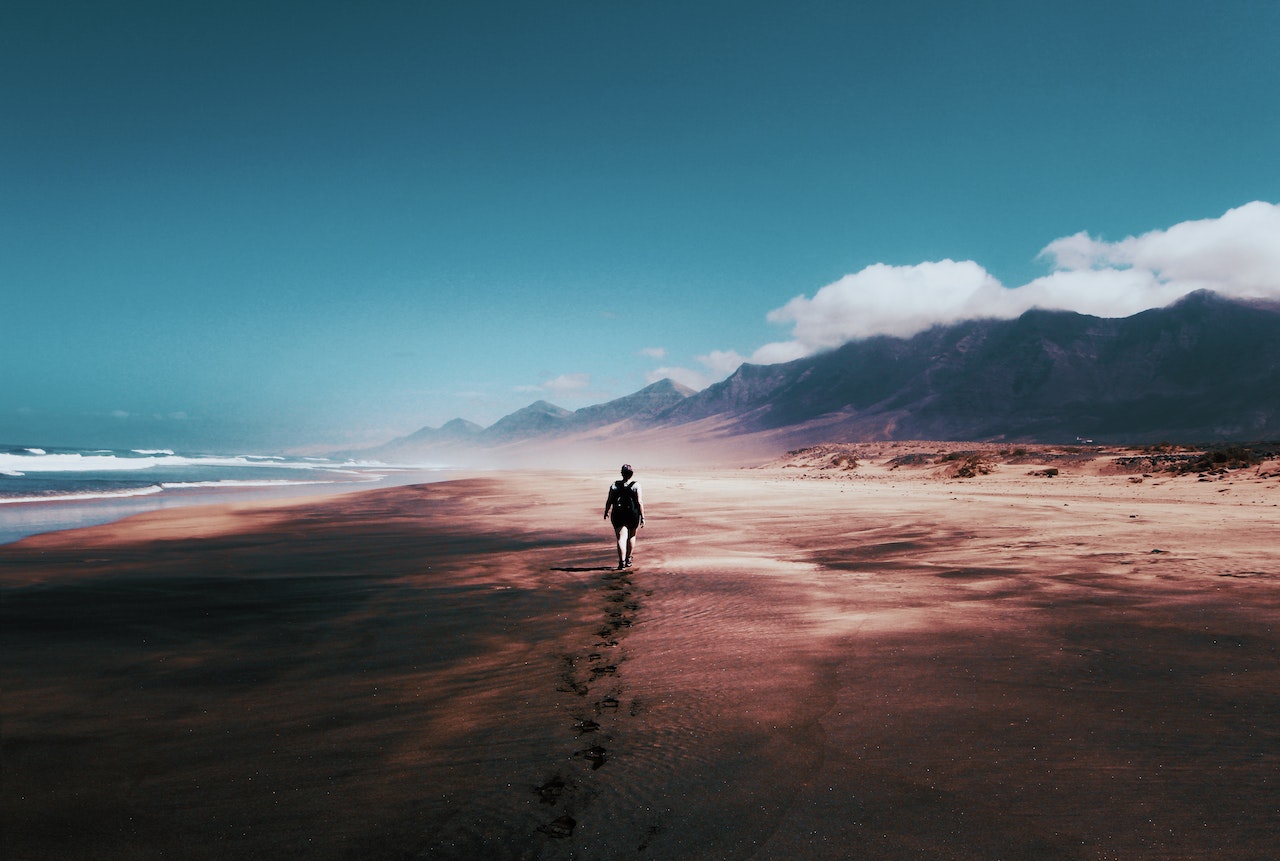 This conversation between Jesus and a Jewish scribe is a part of a series (the fifth of six) that was taking place in the outer court of the temple. In fact, the scribe noticed that Jesus had already given a good answer in an earlier dialogue, perhaps the one between Jesus and the Sadducees in terms of the promise of the resurrection (vv. 18–27). In any case, this teacher of the law approached Jesus apparently with good intentions, that is, with no guile or without any design to entrap him as others, especially the Pharisees and the Herodians, had tried to do (vv. 13–17). Once again, not all of the religious leaders held negative attitudes toward Jesus. That’s simply a myth. Some, like this scribe, desired to learn from his engaging wisdom. He was one of the few exceptions in the ongoing religious opposition.

The question posed that day was worthy of any rabbi because it required deep reflection in consideration of all the 613 laws of the Torah (the first five books of the Bible) in order to win the basic, fundamental insight pervading them all: “Of all the commandments, which is the most important?” That’s a question that everyone who desires to love God above all should ask. It already indicates a measure of wisdom. As a good Jew, steeped in the traditions of his people, Jesus began his reply by citing the Shema (a confession of faith that is recited by Jews twice a day): “Hear, O Israel: The Lord our God, the Lord is one” (Deut. 6:4).

Jesus continued the quotation from Deuteronomy, though he changed the text slightly, in his declaration that one must, “Love the Lord your God with all your heart and with all your soul and with all your mind and with all your strength” (emphasis added). Indeed, the Old Testament passage had simply mentioned loving God in terms of your heart, soul, and strength, and Jesus added “with all your mind” as well, highlighting that the love of God requires all of who we are as persons, as embodied souls with both hearts and minds that are energized by the call of God upon them. The addition of Jesus then was welcomed, and evidently well received by the scribe, because it revealed the meaning of the ancient text in its depth and fullness. Precisely because God is one, and no other, devotion to the Most High requires all that we are, whatever faculties, capacities, or talents that we possess.
Jesus, however, was not done. To the passage in Deuteronomy, he added a commandment from Leviticus: “Love your neighbor as yourself” (Lev. 19:18). That is, he reached for different books of the Bible and put two passages together. Other Jews had made this connection as well—that these two commandments do, indeed, belong together. Such a linkage, for example, can be found in the writings of Philo, a Jewish contemporary of Jesus.1 Nevertheless, Jesus did do something new here, and in a way much different from the traditional interpretations of the period. His understanding of the Leviticus passage cracked it open to reveal its full, original intent precisely when it was viewed in light of the first commandment to love God above all. The religious leaders of the first century had understood the command to love your neighbor as yourself as directed to “anyone among your people” (Lev. 19:18)—in other words, as restricted, by and large, to a fellow Hebrew or Jew. In short, it hardly applied to Gentiles in their thinking. However, Leviticus 19:33–34 (and in a similar way in Deuteronomy 10:19) did, indeed, open up the circle of love to include “the foreigner residing among you,” and Jesus understood that teaching so very clearly and lived accordingly.

To be sure, the ministry of Jesus, especially in terms of his key teachings, underscored that the neighbor does not simply correspond to the favored and limited groups in which first-century Jews often participated. That circle of love was far too small, too restrictive. Its circumference had to be broadened. The neighbor now included such folk as Samaritans, Gentiles, Syrophoenicians, and even one’s enemies—in other words, anyone who bore a human face, anyone created in nothing less than the image and likeness of God. If you doubt any of this, consider what Jesus taught in the parable of the good Samaritan found in Luke 10:25–37 in which an expert in the law, seeking to justify himself, had asked him: “And who is my neighbor?” (v. 29). Jesus replied to this frank question by telling a story in which a priest, a Levite, and a Samaritan all played very surprising and unexpected roles. The point of the parable was to teach a grand truth that had obviously escaped this very pious and educated man—and he was certainly not alone.

Precisely because God is one, the Almighty as Creator not only is over all but loves both Jew and Gentile alike. Put another way, monotheism (belief in one God exclusively) tolls the death knell for the channeling of divine love to a limited, restricted, and exclusive group, one that, due to its own misunderstanding of what the love of God entails, has become in effect one tribe over against all other tribes. More to the point, a tribal understanding of a people always represents a diminishment in the understanding of who God is. When this happens, the Holy One is reduced (in the people’s minds, at least) to being merely “the god of a tribe,” a powerful and exalted defender of the group, perhaps even a nationalistic god who preserves a particular people at all costs in the midst of all its enemies.

In contrast to this deeply troubled approach, Jesus taught in numerous ways throughout his ministry that the two commandments were intricately related in ways that the rabbis had never imagined. Simply put, God could not be loved with all our heart, mind, soul, and strength unless we loved our neighbor as ourselves, unless we broke out of the limitations, the restrictions of our self-created tribal ways, in order to see and embrace the “other,” someone so very unlike ourselves. Only then would a transcendent God, the one who is above all the petty tribalisms of group life, be rightly adored. To be a true monotheist, then, is an enormous challenge, not only to love God above all but also to love one’s neighbor as oneself in which the circle of love is broad, wide, and generous. In short, that circle is great precisely because God is great.

There’s one last way, however, in which all of this can go wrong, horribly wrong, even when the love of God and neighbor is just beginning to be properly appreciated. It’s the last holdout, if you will, the final obstacle on the way to a generous and inclusive love—the kind of love that Jesus called for, one that once again even embraces our enemies, those whom we judged to be “the other.” Precisely because this last holdout is so very near the kingdom of God, yet without entering in, it is, therefore, all the more serious. Remarkably enough, the scribe in his response to Jesus, in noting that he had spoken well, also had a sense of this peril, one that all serious religion faces. This man, given his sincerity and wisdom, must have reflected on this danger much earlier and at great length. What had the teacher of the law replied? Adding commentary to the two great commandments, he pointed out in a very perceptive way: “To love him with all your heart, with all your understanding and with all your strength, and to love your neighbor as yourself is more important than all burnt offerings and sacrifices” (emphasis added).

This last judgment of the scribe was both sound and trustworthy. Though burnt offerings and sacrifices as modes of worshiping the Almighty were clearly important in the history of Israel, they were never the most important things of all. They were the means, the instruments, to glorify God; they were never the ends or goals of the faith itself. It took deep wisdom and an abundance of honesty to recognize that. Recall the words of Hosea: “For I desire mercy, not sacrifice, and acknowledgment of God rather than burnt offerings” (6:6). Consider also the counsel of Proverbs 21:3, “To do what is right and just is more acceptable to the Lord than sacrifice.” In fact, Jesus had considered the response of the teacher of the law so wise that he told the man, “You are not far from the kingdom of God.” Simply put, after God, people are most important of all! The glory of God shines through their being (the image of God) in a way that is without parallel in all of creation. It’s not about stuff or things; it’s about persons.

In a similar way, what if we took some of the elements of the Christian faith—matters pertaining to modes of worship, understandings of ministry, and even forms of prayer—and made them decisive, evidently the most important things of all, such that even within the Christian communion of faith believers would now be badly divided, alienated in their many differences? What if such things caused fellowship to be broken, through stated rule and precept, and love was thereby lessened among those who claimed with their lips that they were the ones forever committed to the universal love of God and neighbor, to the two great commandments of which Jesus spoke? If, however, such religious folk could not even love those of their own broader household of faith, with its various members, how then could they ever love the other in the way that the commandment required and as emphasized by Jesus? Even the teacher of the law was beginning to understand that much. Would it be, then, that the Christian faith, so construed, had become just another tribe, just another group, one among many, and thereby, at least in some sense, turned on its head?