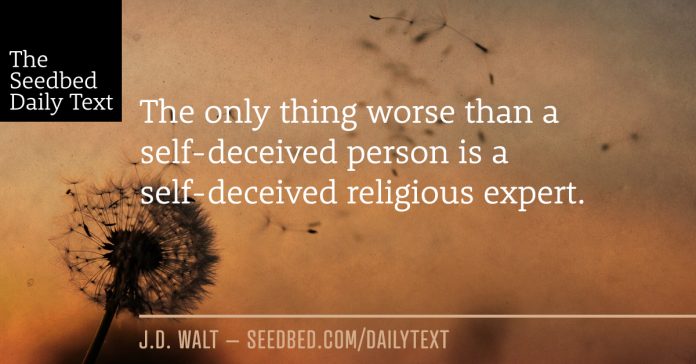 They disagreed among themselves and began to leave after Paul had made this final statement: “The Holy Spirit spoke the truth to your ancestors when he said through Isaiah the prophet:“‘Go to this people and say,“You will be ever hearing but never understanding;    you will be ever seeing but never perceiving.”For this people’s heart has become calloused;    they hardly hear with their ears,    and they have closed their eyes.Otherwise they might see with their eyes,    hear with their ears,    understand with their heartsand turn, and I would heal them.’“Therefore I want you to know that God’s salvation has been sent to the Gentiles, and they will listen!”

Paul knew how to open a conversation about the Gospel, and he knew how to end one. In today’s text he decides to go apostolic-nuclear on the Jews from Rome. Why? Here’s my theory.

To be self-deceived is to suffer from immunity to the cure.

Perhaps the most damning symptom of this kind of infection is the self-assured conviction you don’t have it.

The only thing worse than a self-deceived person is a self-deceived religious expert. About the only hope is some kind of train wreck or horse wreck as the case may be. Who knew this better than Paul. Maybe that’s why he was so slow to give up on his former colleagues. Paul knew what it meant to have a hard heart; to be convinced you are giving God the highest worship only to shockingly discover it was pure, unadulterated idolatry.

That’s what we’re dealing with here—idolatry. People inevitably become what they behold, for better or for worse. An idol has eyes but cannot see; ears but cannot hear, and a heart but cannot feel. When one’s worship of “God” becomes driven by self-preservation or self-gain they have slipped from worship to idolatry. To worship an idol is to worship oneself.  Their religion consists in self-deceived manipulation of the so-called “god.” “If we do this, God will have to bless and prosper us,” the thinking goes. It runs the gamut from the prosperity gospel to Islamic suicide bombers.

Take the latter as an extreme example. People who strap on suicide vests and detonate them in public markets do so not so much because they are deranged but because they are devoted. They believe such an act will return to them immediate, extravagant, and eternal blessing. Paul is a classic example. His devotion to “god” led him to kill Christians, and he had no idea of it. He was utterly self-deceived. He had become deaf to the word of God, blind to the image of God and dead to the compassion of God. He had become the absolute worst version of his God created self. That’s what idolatry does.

Idolatry always eventually casts a long shadow of injustice. It leads people to do things they never imagined they would do. It’s because idolatry cloaks itself in the slow seduction of self-deception.

The Isaiah 6 card is pretty much a game-ender. Apparently Paul ran every play in his book to no avail. Finally, he played Isaiah 6: the apostolic nuclear option. Why? Because idolatry is a matter of life and death.

The gospel, by its very nature, is confrontational. It doesn’t need our help. Sometimes, though, we must take it to the extreme. Sometimes it will require a willingness to possibly lose our friends in order to save their lives.

When all else fails, and there’s love in your heart for your hearers, don’t be afraid to go there. It may be their last best chance.

Have you ever risked losing a friend in order to tell them the truth about God? How did that go?