Why We Aren't the Champions - Seedbed
close
Menu 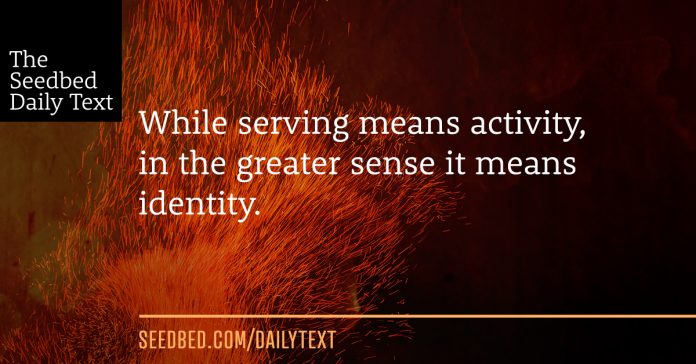 30 They left that place and passed through Galilee. Jesus did not want anyone to know where they were, 31 because he was teaching his disciples. He said to them, “The Son of Man is going to be delivered into the hands of men. They will kill him, and after three days he will rise.” 32 But they did not understand what he meant and were afraid to ask him about it.

33 They came to Capernaum. When he was in the house, he asked them, “What were you arguing about on the road?” 34 But they kept quiet because on the way they had argued about who was the greatest.

35 Sitting down, Jesus called the Twelve and said, “Anyone who wants to be first must be the very last, and the servant of all.”

Who says that?  O.K., well there was Muhammad Ali who gave himself the nickname, “The Greatest,” but it’s just not something you hear people saying too often.

Until we realize the sin du jour of every age is that of comparing ourselves to others. Every comparison we make with another person, whether we admit it or not, results in one who is greater and one who is lesser.

It’s human nature; to want to be the greatest, to be the best, to be #1. That the disciples argued about who was the greatest as they walked along the road was par for the course then as well as today.

A sports team can be ranked at the bottom of the league, but if they happen to pull off a win, all of a sudden the index fingers shoot up into the air of players and fans alike accompanied by the exultant cries, “We’re number 1.”

We all do it. It’s why one of the favorite songs of all time has to be Queen’s “We are the Champions.” I suppose a little friendly competition can be a good thing, if only we could leave it on the field. Unfortunately we can’t, or at least we don’t. Oftentimes as I’m scrolling through Facebook or Instagram it strikes me as one massive competition to show who has the most perfect kids and the most awesome family vacations and the most dreamy homes and meals, and on it goes. The competition really kicks into high gear as December rolls around, and the dreaded Christmas letters start pouring in. You know what I’m talking about. Someday I’m going to write a Christmas letter that tells all the horror stories and dark secrets of the prior year’s real family life. Imagine reading that one!

Jesus takes this “We are the Champions” mentality and turns it upside down. He does it by redefining the meaning of the word “greatness.” Greatness, according to God, has nothing to do with being superior and everything to do with becoming a servant. It doesn’t mean making oneself a doormat for others to walk on. Servanthood does not mean thinking of yourself as a loser or as somehow worse than others. It means putting the needs of others ahead of yourself. This is hard, and if it seems easy you are either a) not actually doing it, or b) maturing into a bonafide follower of Jesus.

A final note: While serving means activity, in the greater sense it means identity. This is why Jesus lifts up the child in their midst. A child is a child not because of some effort they make. It is who they are. In those days, a child was as status-less as a slave. To be a servant is a mentality. It is a state of mind. Paul put it like this:

Have the same mind in you that was in Christ Jesus, who being in very nature God, did not consider equality with God something to be grasped, but made himself nothing and taking on the nature of a servant….” Philippians 2:5-ff

Spirit of the Living God, fall afresh on me. Lord Jesus, I get what you are saying about greatness, but it is still head knowledge. I need to grasp it as life knowledge, which is the wisdom that can only come from your mind to mine. Do that in me. I am willing. Melt me. Mold me. Fill me. Use me. For the glory of your name, Jesus. Amen.

It is one thing to serve, yet quite another to take on the mentality of a servant. How are you doing this in your life?

© Seedbed 2021
Why We Aren't the Champions
MORE STORIES