Why Do Bad Things Happen to Good People? It's the Wrong Question
close
Menu 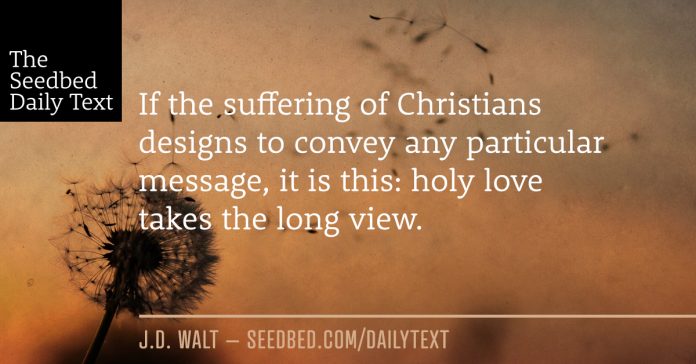 Then the high priest and all his associates, who were members of the party of the Sadducees, were filled with jealousy. They arrested the apostles and put them in the public jail. But during the night an angel of the Lord opened the doors of the jail and brought them out. “Go, stand in the temple courts,” he said, “and tell the people all about this new life.”At daybreak they entered the temple courts, as they had been told, and began to teach the people.When the high priest and his associates arrived, they called together the Sanhedrin—the full assembly of the elders of Israel—and sent to the jail for the apostles. But on arriving at the jail, the officers did not find them there. So they went back and reported, “We found the jail securely locked, with the guards standing at the doors; but when we opened them, we found no one inside.” On hearing this report, the captain of the temple guard and the chief priests were at a loss, wondering what this might lead to.Then someone came and said, “Look! The men you put in jail are standing in the temple courts teaching the people.” At that, the captain went with his officers and brought the apostles. They did not use force, because they feared that the people would stone them.

Let’s begin today in the spirit of some good old fashioned catechesis.

QUESTION: “If God is for us, who can be against us?” Romans 8:31
ANSWER: A lot of people, powers, principalities, and pain can come against us.

QUESTION: Will the opposition ultimately win?
ANSWER: Not a chance!

QUESTION: Can they inflict unbearable pain on us in the meantime?
ANSWER: You better believe it.

As things heat up in J-Town we are going to start seeing some bad things happen to good people. The outcomes will vary. In this particular instance, it miraculously worked out for the Apostles as an angel sprang them from jail. As we turn the page into chapter six we will witness our first martyr.

But notice as we go along that no one seems to be asking the perennial question of our time, “Why do bad things happen to good people?” Do you know why the Bible does not answer the question, “Why do bad things happen to good people?” Because the Bible is simply not asking that question. Nor were the early Christians asking this question. The early Christians were not philosophizing about sin, death, and evil. They were fighting it with everything they had. At times an angel would spring them out of jail at midnight. At other times they would take rocks to the face until the bitter end.

The gospel promises that we will win the war, but it almost guarantees we will lose quite a few battles along the way. The true sign of prosperity is not success in all things, it is endurance despite all things. We are not talking about a “grit your teeth and grind it out” endurance born of human effort. Where the Holy Spirit is involved, it looks like joyfully horrific perseverance.

Fast forward to the present day. At times the enemy will look like Islamic Jihadists in a peaceful marketplace. At other times the enemy will take on the form of stage three cancer for an 18 year old. Sometimes the chemotherapy fails and cancer wins the battle. And still at other times, the suicide vest will fail to detonate, and the believers will live to see another day.

The gospel does not guarantee a get out of jail free card, though at times, as a bonus of encouragement for believers, it will miraculously happen. We can rejoice when it does, but we must remember, the mission is not contingent on the miracle. After all, where does the angel send the Apostles after delivering them? Yes, right back into the fray, where they will be arrested again.

If the suffering of Christians is designed to convey any particular message, it is this: Holy Love takes the long view.

No, in all these things we are more than conquerors through him who loved us. For I am convinced that neither death nor life, neither angels nor demons, neither the present nor the future, nor any powers, neither height nor depth, nor anything else in all creation, will be able to separate us from the love of God that is in Christ Jesus our Lord. (Romans 8:37-39)

Why do you think we spend so much time in the modern age trying to figure out and explain why bad things happen to good people? Why do you think they didn’t focus on this issue in the apostolic age?

© Seedbed 2021
Why Do Bad Things Happen to Good People? It's the Wrong Question
MORE STORIES