Do You Believe in Demons? - Seedbed
close
Menu 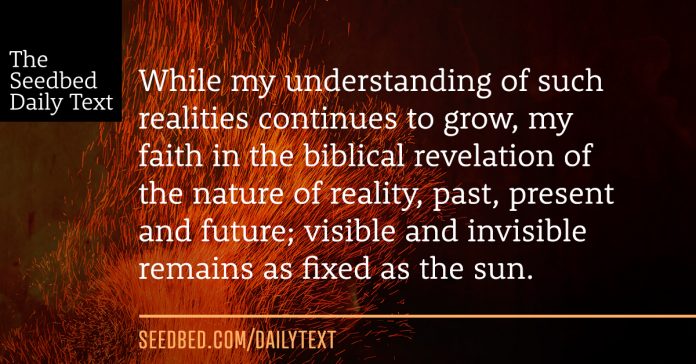 9 Then Jesus asked him, “What is your name?”“My name is Legion,” he replied, “for we are many.” 10 And he begged Jesus again and again not to send them out of the area.11 A large herd of pigs was feeding on the nearby hillside. 12 The demons begged Jesus, “Send us among the pigs; allow us to go into them.” 13 He gave them permission, and the impure spirits came out and went into the pigs. The herd, about two thousand in number, rushed down the steep bank into the lake and were drowned.

14 Those tending the pigs ran off and reported this in the town and countryside, and the people went out to see what had happened. 15 When they came to Jesus, they saw the man who had been possessed by the legion of demons, sitting there, dressed and in his right mind; and they were afraid. 16 Those who had seen it told the people what had happened to the demon-possessed man—and told about the pigs as well. 17 Then the people began to plead with Jesus to leave their region.

18 As Jesus was getting into the boat, the man who had been demon-possessed begged to go with him. 19 Jesus did not let him, but said, “Go home to your own people and tell them how much the Lord has done for you, and how he has had mercy on you.” 20 So the man went away and began to tell in the Decapolis how much Jesus had done for him. And all the people were amazed.

60. When you have a quantity of demonic spirits with capability to possess a herd of two thousand pigs and they are all living in the same person you have an impossible situation. But if there’s one thing we know from reading the Bible, it’s that nothing is impossible with God.

61. Before we go further into this Gospel we need to ask ourselves a couple of questions. We need to take a bit of a reality check. First, do we hold to a biblical view of the world with categories for visible and invisible? Seen and unseen? How about natural and supernatural? What about demonic beings and angelic beings? The Bible does not set out to prove these dimensions of reality. It assumes them. Given the scientific age in which we live, many are dismissive of the biblical worldview as a relic of pre-modern times. I am not one of those people. I have neither an overly simplistic nor a highly sophisticated understanding of the categories inherent in a biblical worldview. That said, believing in an unseen reality strikes me as a fundamental requirement of faith and a prerequisite for biblical Christianity.

I trust in the veracity and the authority of the Bible. When Scripture speaks of the Holy Spirit, I believe it. When Scripture speaks of demonic beings, I believe it. When Scripture speaks of angelic visitations, I believe it. While my understanding of such realities continues to grow, my faith in the biblical revelation of the nature of reality, past, present and future; visible and invisible remains as fixed as the sun. This is not blind, easy, believism. It is the hard fought, time tested fruit of faith. Many God-fearing Christians remain agnostic on these matters, content to live out their lives with the conviction of a hung jury. While I don’t want to insist on belief in demonic spirits and such as essential to saving faith, I do believe that robust growth in the Christian faith requires one to lean trustingly into the biblical world view rather than accepting the easy agnosticism of our age.

62. Here are the basic contours of my own developing theology of the demonic, all of which I see at work in today’s text. First, demonic presence distorts human identity. Second, apart from the indwelling presence and power of the Holy Spirit, human beings are defenseless against demonic forces. Third, the reign of Jesus (a.k.a. the Kingdom of God) means the present power of the Holy Spirit to provide protection from and aid to prevail decisively over demonic forces. (i.e. “Deliver us from evil)

63. I am an appreciator of C.S. Lewis’ piercingly pragmatic take on Satan and demons in his classic book, The Screwtape Letters. Because I need to close, I’ll limit my references to two favorite quotes of the senior demon to Wormwood, the apprentice.

This first quote references the unintelligent lack of belief in the demonic by so many:

My Dear Wormwood,I wonder you should ask me whether it is essential to keep the patient in ignorance of your own existence. That question, at least for the present phase of the struggle, has been answered for us by the High Command. Our policy, for the moment, is to conceal ourselves. . . . . I do not think you will have much difficulty in keeping the patient in the dark. The fact that “devils” are predominantly comic figures in the modern imagination will help you. If any faint suspicion of your existence begins to arise in his mind, suggest to him a picture of something in red tights, and persuade him that since he cannot believe in that (it is an old textbook method of confusing them) he therefore cannot believe in you.

The second quote references the uninformed lack of faith in the power of Jesus and his Church.

One of our great allies at present is the Church itself. Do not misunderstand me. I do not mean the Church as we see her spread but through all time and space and rooted in eternity, terrible as an army with banners. That, I confess, is a spectacle which makes I our boldest tempters uneasy. But fortunately it is quite invisible to these humans.

Spirit of the Living God, fall afresh on me. I confess that I am so captured and at times captivated by the spirit of the age with all its scientific prowess and reasonable thinking. I don’t want to be unscientific or unreasonable, but I do want a deep biblical worldview and vision. I want to understand and live in ultimate reality. Only you know this, Lord. Reveal it to me and release me fully to live in light of it. Melt me. Mold me. Fill me. Use me. For the glory of your name, Jesus. Amen.

Where are you in your understanding and belief in the reality of evil, Satan, and demons? Can you afford to be agnostic about it?