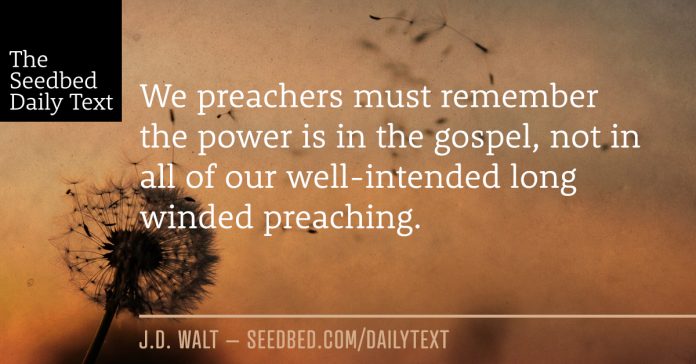 “Fellow children of Abraham and you God-fearing Gentiles, it is to us that this message of salvation has been sent. The people of Jerusalem and their rulers did not recognize Jesus, yet in condemning him they fulfilled the words of the prophets that are read every Sabbath. Though they found no proper ground for a death sentence, they asked Pilate to have him executed. When they had carried out all that was written about him, they took him down from the cross and laid him in a tomb. But God raised him from the dead, and for many days he was seen by those who had traveled with him from Galilee to Jerusalem. They are now his witnesses to our people.“We tell you the good news: What God promised our ancestors he has fulfilled for us, their children, by raising up Jesus. As it is written in the second Psalm:“‘You are my son;    today I have become your father.’God raised him from the dead so that he will never be subject to decay. As God has said,“‘I will give you the holy and sure blessings promised to David.’So it is also stated elsewhere:“‘You will not let your holy one see decay.’“Now when David had served God’s purpose in his own generation, he fell asleep; he was buried with his ancestors and his body decayed. But the one whom God raised from the dead did not see decay.“Therefore, my friends, I want you to know that through Jesus the forgiveness of sins is proclaimed to you. Through him everyone who believes is set free from every sin, a justification you were not able to obtain under the law of Moses. Take care that what the prophets have said does not happen to you:“‘Look, you scoffers,    wonder and perish,for I am going to do something in your days    that you would never believe,    even if someone told you.’”

Pisidian Antioch: This is Part 2 of Paul’s “exhortation” and proclamation of the gospel to Jews and Gentiles in the synagogue.

Today he begins in the spirit of a good old fashioned Charles Stanley, “Listen!” He is making the proverbial “Turn.” Maybe it’s an oversimplification but if we take a big picture view of how Paul shares the Gospel here’s what we see: Context. Content. Consequences. Call to Action.

CONTEXT: Paul sets the gospel into its storied, historical plot line. Remember, he started with Moses, passed through the Judges up to Samuel, cut to the Monarchy with Saul and David, and dove in to Jesus as the descendant of the house of David.

CONTENT: Jesus died, was buried, rose from the dead, and appeared to many.

CONSEQUENCES: Therefore, through Jesus forgiveness of sins is proclaimed to you. Through him, you have freedom from every sin—a justification not possible through the law of Moses. Whoever scoffs at this truth will perish.

CALL TO ACTION: Everyone who believes . . . Believe! Do not be a scoffer!

This seems pretty straightforward doesn’t it? 549 words. No 45 minute sermon here. We preachers must remember the power is in the gospel, not in all of our well-intended long winded preaching.

Are you prepared to share the message of the gospel of Jesus Christ with another person or group of people? How might you become better prepared?