What Our Bodies Can Teach Us about God - Seedbed
close
Menu 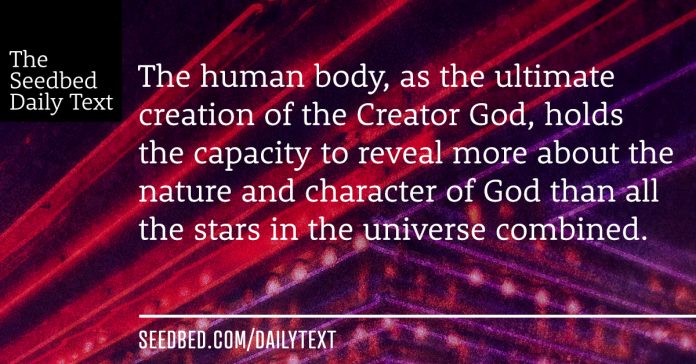 The eye cannot say to the hand, “I don’t need you!” And the head cannot say to the feet, “I don’t need you!” On the contrary, those parts of the body that seem to be weaker are indispensable, and the parts that we think are less honorable we treat with special honor. And the parts that are unpresentable are treated with special modesty, while our presentable parts need no special treatment. But God has put the body together, giving greater honor to the parts that lacked it, so that there should be no division in the body, but that its parts should have equal concern for each other. If one part suffers, every part suffers with it; if one part is honored, every part rejoices with it.

Today’s text could hardly be more clear and it explains itself quite well. When we go home, we are part of a family. When we go to work, we are part of a team. When we join a civic group or club or organization, we are part of a community. When we pay our taxes or show up to vote, we are part of a citizenry. But when it comes to church—God’s holy people—we are a body. It’s common to think of church as a family or a team or a community and even as a citizenry when it comes down to the “holy nation” descriptor in Scripture. Church is more than all of these things though, because church is a body: the body of Christ. It’s easy to think we get that, and at some level we surely do. It’s a metaphor at one level, but at another level the Holy Spirit is revealing a deeper and even more literal meaning.

Again, Paul is dealing with the pagan baggage of the Corinthian Christians. They were all about distinguishing themselves from one another and being more important and more spiritual and knowledgeable and wiser and so forth. From chapter 1 to today’s text, it was one big spiritual flexing contest with these folks and they were as divided as the audience at a Miss America beauty pageant. Now they were using the gifts of the Holy Spirit to claim superior awesomeness and a lot of it came down to the gift of tongues, which we will get to later.

Paul would not have it. The Holy Spirit revealed a picture to the church of how he worked in the new creation underway. He called this uber-spiritual bunch to look at the most tangible, physical, ever-present reality in their lives: their own bodies. I bet they hated that. The thing about a human body is the way the extraordinary intricacies of so many different systems work so interdependently, seamlessly, and, in many ways, completely effortlessly.

But God has put the body together, giving greater honor to the parts that lacked it, so that there should be no division in the body, but that its parts should have equal concern for each other.

No other image can simultaneously convey the inexhaustible diversity and the unsurpassable unity than that of a human body whose exquisite coordination is guarded and governed by the head. And who made the human body? Bingo! And who is the head? Yep! The physical human body images the God who created it, the perfect union and profound diversity of Father, Son, and Holy Spirit.

As with all metaphors, they can be pushed too far—except this one. I’m not sure this metaphor can ever be exhausted of its meaning. The human body, as the ultimate creation of the Creator God, holds the capacity to reveal more about the nature and character of God than all the stars in the universe combined. Could it be another part of the reason that God became a person, a human being, a body?

This text reveals to us the true nature of our relationships with one another: connected, interrelated, seamlessly put together with incalculable diversity and indivisible unity.

I’ve read this text hundreds of time and never really seen it. I’ve just let the words pass through my mind as I told myself, “I get it.” I think I am only beginning to barely grasp it. What’s different this time? As I typed these words I became aware of the miraculous way my ten fingers did their work—all doing different things yet all doing the same thing—working with a diversity of letters to create a multiplicity of words each meaning something different yet together making new meaning.

I always knew my spiritual gift was typing!

Our Father in Heaven, hallowed be your name. Your Kingdom come. Your will be done, on Earth as it is in Heaven. Thank you for my physical body. I confess I take it for granted. I assume so much of the brilliance you have built into my body. Open all of my perceptions to behold the miracle of your creation in me. And open my mind to understand my relationships with my brothers and sisters in Christ through the lens of my physical body. Come Holy Spirit, reveal and teach to me the obvious profundities of these things. In Jesus’ name. Amen.

I want to keep alerting you to a landmark book we will soon be releasing through our publishing partnership with Harper Christian: Zondervan. The book is by Timothy C. Tennent and titled, For the Body: Recovering a Theology of Gender, Sexuality, and the Human Body. (Releases late October, 2020). Pre-order it here.