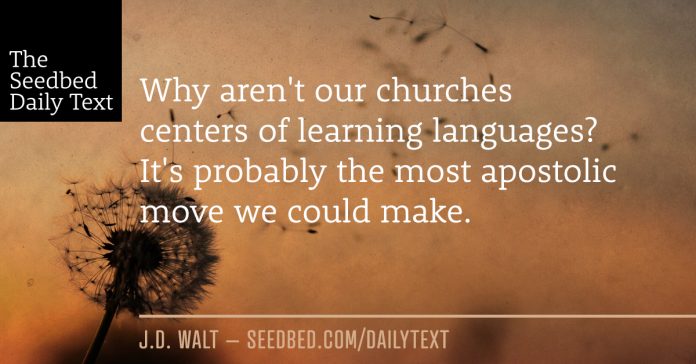 “Brothers and fathers, listen now to my defense.”When they heard him speak to them in Aramaic, they became very quiet.Then Paul said: “I am a Jew, born in Tarsus of Cilicia, but brought up in this city. I studied under Gamaliel and was thoroughly trained in the law of our ancestors. I was just as zealous for God as any of you are today. I persecuted the followers of this Way to their death, arresting both men and women and throwing them into prison, as the high priest and all the Council can themselves testify. I even obtained letters from them to their associates in Damascus, and went there to bring these people as prisoners to Jerusalem to be punished.

Paul’s apostolic mojo just keeps getting better. Did you pick up in yesterday’s reading where Paul seemingly surprised the Roman soldier by speaking to him in Greek? Then he turns and addresses the Jewish rioters in Aramaic. Did you notice that in both instances he immediately captured the attention of his hearers?

I never cease to be surprised by people who speak multiple languages. It’s impressive. What impresses me most is to observe the other person being spoken to in their own language. It often visibly impacts them. When it comes to languages, I am a hack at best. Over the years I’ve managed to learn a few words and phrases from several different languages. I use them every chance I get and without fail, it delights the hearer. Their face usually lights up with a smile, conveying a feeling they have been respected.

This was the great surprise of Pentecost. “Utterly amazed, they asked: ‘Aren’t all these who are speaking Galileans? Then how is it that each of us hears them in our native language?'” (Acts 2:7-8)

According to the Bible, the gospel will not stop until it is spoken in every language on the planet. Every knee will bow and every tongue confess that Jesus Christ is Lord.

Given all of this, it seems like the church would be more interested in and committed to the teaching and learning of multiple languages than the schools. Doesn’t it? Why aren’t our churches centers of learning languages? It’s probably the most apostolic move we could make.

We have it on good evidence that the Holy Spirit will help you.

How about you? Do you speak any other languages than your native one? Have you ever considered learning another language an act of discipleship to Jesus?