Why Be a Coach When You Are Called to Be a Player? - Seedbed
close
Menu 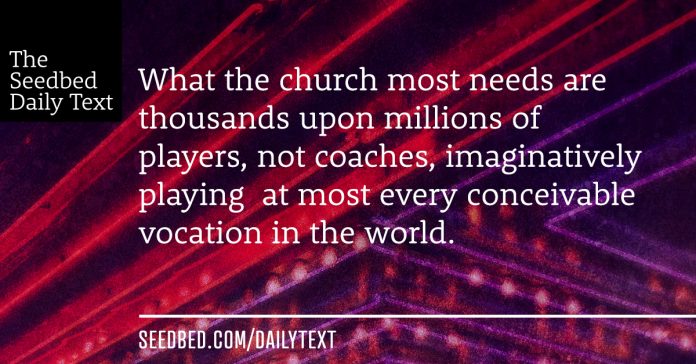 Nevertheless, each person should live as a believer in whatever situation the Lord has assigned to them, just as God has called them. This is the rule I lay down in all the churches. Was a man already circumcised when he was called? He should not become uncircumcised. Was a man uncircumcised when he was called? He should not be circumcised. Circumcision is nothing and uncircumcision is nothing. Keeping God’s commands is what counts. Each person should remain in the situation they were in when God called them.

Were you a slave when you were called? Don’t let it trouble you—although if you can gain your freedom, do so. For the one who was a slave when called to faith in the Lord is the Lord’s freed person; similarly, the one who was free when called is Christ’s slave. You were bought at a price; do not become slaves of human beings. Brothers and sisters, each person, as responsible to God, should remain in the situation they were in when God called them.

Now about virgins: I have no command from the Lord, but I give a judgment as one who by the Lord’s mercy is trustworthy. Because of the present crisis, I think that it is good for a man to remain as he is. Are you pledged to a woman? Do not seek to be released. Are you free from such a commitment? Do not look for a wife. But if you do marry, you have not sinned; and if a virgin marries, she has not sinned. But those who marry will face many troubles in this life, and I want to spare you this.

If I’ve seen it happen once, I’ve seen it a hundred times. I’ve seen it happen with two different kinds of people. Here’s the scenario. On the one hand, a person has a dramatic conversion, leaves behind their former way of life, and begins to diligently reorient their life around the lordship of Jesus Christ. It’s an awesome sight to behold. In the other instance, a person has been in the church for years faithfully going through the motions but with little sense of a dynamic experience of relationship with God. Something happens in this person’s life, a crisis or an awakening, and all the lights come on, the dots connect, and they come alive to the Holy Spirit and it all finally makes sense. They become passionate about following Jesus and are ready to do whatever he says, whenever, wherever, and however. This, too, is a glorious sight to behold.

So far so good, until they start realizing they have become something of an “outlier,” both in their every day world and even in their local church. Many soon lose interest in their former line of work and begin to think perhaps they are called to quit their job, go to seminary, pursue ordination and enter full-time ministry. Maybe they are, but in most cases—having seen this enacted hundreds of times now—I would say probably not.

Nevertheless, each person should live as a believer in whatever situation the Lord has assigned to them, just as God has called them. This is the rule I lay down in all the churches.

The situation Paul was dealing with in Corinth was not exactly analogous, but we can glean some clear guidance for the situation I outlined. In Paul’s situation, people felt they had to leave their former station (Gentile/Jew, married/unmarried, slave/free) in order to fulfill their new calling. In other words, in order to live out their new way of life they needed to change their status, relationships, social station, and so forth—because of the dramatic change in their life they needed a decisive change in their social arrangement. Paul said absolutely not.

Are you seeing the analogy? The challenge in today’s church scenarios is we have basically two options: become a clergy person or otherwise get hired by the church or another ministry or just be a layperson. This is a big problem. This notion that a person is “just a layperson,” is nothing short of tragic. It’s another way of saying, “I can only go to the game in my present state, but I could never really play on the field.” Okay, sure I could work in the concessions stands or be an usher or any number of other volunteer roles, but I can’t really be a player in this game unless I quit my job, go to seminary, get ordained, and so forth.

Imagine going to a college football game (or pick your sport) this Saturday, arriving at your seat in the bleachers, and seeing the incredulous site of the two opposing teams made up entirely of coaches. What kind of disastrous game would that be?! In the aggregate, that’s exactly the kind of scene we are seeing played out in large parts of the church. The only people allowed to play are the professionals (i.e., the coaches) while all the players have to sit in the stands or, at best, sell hotdogs and cokes to the other players who are sitting in the stands watching the disaster of a game full of coaches doing all the playing.

The church needs coaches for sure and some in the situations I outlined are called to be coaches (and I employ the term loosely rather than technically to make my point). What the church most needs are thousands upon millions of players—imaginatively playing  at most every conceivable vocation in the world.

Each person should remain in the situation they were in when God called them.

In short, unless you have the clear calling to join the coaching staff, don’t leave your present station. That’s probably the place the Lord needs you the most. It’s likely time to double down in your discipleship.

Our Father in heaven, hallowed be your name. Your kingdom come. Your will be done, on earth as it is in heaven. Thank you for the way you call every single baptized follower of Jesus into ministry. Forgive us for the ways we have misunderstood and misappropriated this gift. Thank you for our ordained clergy people and all the gifts they bring to the Body of Christ. Come Holy Spirit and awaken the rest of the Body; the vast and uncounted men and women who don’t see themselves as full court players in the kingdom. Unleash this sleeping giant for the sake of the world. Start with us. We pray in Jesus name, amen.

1. When Paul talks about calling in this text, he means first and foremost the calling to belong completely to Jesus Christ, which is lived out in a fruitful life of following him with a winsome wholehearted obedience. Have you heard that calling? Have you answered it? Have you come to grips with the fact that you are called to be a player rather than a spectator or even a helpful volunteer on the sidelines?

2. What would it look like for you to live out that primary calling in your present vocational role or station in life?

3. What would doubling down in your discipleship mean at this stage in the game for you?

Today’s entry reminds me of my first book. Though it was written in Daily Text style, it predates the Daily Text. The book is called, interestingly enough, Called: Following a Future Filled with the Possible. It was one of the first things Seedbed published way back in 2012. I would love to gift you with an ebook version today if you are interested. You can find it here. Select the e-version (Kindle, Epub, or a PDF), and use the code DTCALLED. And if you want to see a young-ish version of me, watch the video trailer down the page.