Differences Between Possessing Power and Being Possessed by Power
close
Menu 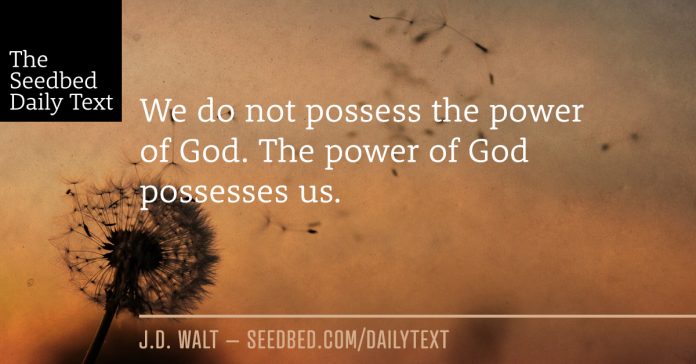 In the morning, there was no small commotion among the soldiers as to what had become of Peter. After Herod had a thorough search made for him and did not find him, he cross-examined the guards and ordered that they be executed.Then Herod went from Judea to Caesarea and stayed there. He had been quarreling with the people of Tyre and Sidon; they now joined together and sought an audience with him. After securing the support of Blastus, a trusted personal servant of the king, they asked for peace, because they depended on the king’s country for their food supply.On the appointed day Herod, wearing his royal robes, sat on his throne and delivered a public address to the people. They shouted, “This is the voice of a god, not of a man.” Immediately, because Herod did not give praise to God, an angel of the Lord struck him down, and he was eaten by worms and died.But the word of God continued to spread and flourish.When Barnabas and Saul had finished their mission, they returned from Jerusalem, taking with them John, also called Mark.

There’s a sense we need to get our Herods straight and there’s a sense we don’t. Herod. The name smacks with evil and darkness. Remember “Herod”? He was the one who at the news of the birth of Jesus had all children two years old and younger to be slaughtered. He didn’t live too long after this and his death was reported to Joseph by an angel alerting him it was fine to return to Nazareth. The Herod spoken of today is not that Herod but another one—Herod Agrippa. Still a different Herod—Antipas—was responsible for the decapitation of John the Baptist. Anyhow, Agrippa had James executed by sword, and Peter was on deck. This guy was wicked. He saw himself as a god, and so did many of those he ruled.

Look at the reversal of fortune here. The one who considered himself a god is struck dead. The one who refused to be worshiped kept right on going. Herod possessed all the power the world could offer yet was powerless against Peter, who possessed no power. Here’s where we make a subtle yet egregious error. We are wont to say that Peter possessed the power of God. The truth? The power of God possessed Peter.

Note how the writer here interprets the event. “Because Herod did not give praise to God, an angel of the Lord struck him down.”

Writing later, drawing from the prayer book of the early church, Peter penned these words from Psalm 34:

For the eyes of the Lord are on the righteous
and his ears are attentive to their prayer,
but the face of the Lord is against those who do evil.” 1 Peter 3:12

It puzzles me though, why didn’t he finish the verse? It ends by saying, “to blot out their name from the earth.”

Whatever happened to the line of Herod? Exactly. How about the line of Peter? Still going strong, twenty-one centuries later.

How do you see the difference between “possessing power” and “being possessed by power”?