What Faith Is and What It Is Not - Seedbed
close
Menu 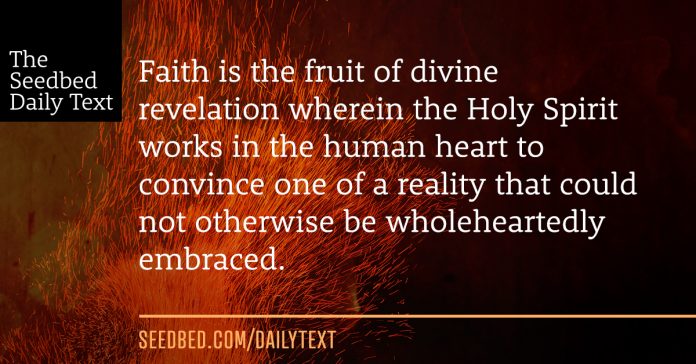 9 When Jesus rose early on the first day of the week, he appeared first to Mary Magdalene,out of whom he had driven seven demons. 10 She went and told those who had been with him and who were mourning and weeping. 11 When they heard that Jesus was alive and that she had seen him, they did not believe it.

12 Afterward Jesus appeared in a different form to two of them while they were walking in the country. 13 These returned and reported it to the rest; but they did not believe them either.

The most interesting aspect of today’s text is the way the disciples chose not to believe the eye witness accounts of Jesus’ resurrection. Why didn’t they believe? Of all people, wouldn’t these dejected disciples have wanted to believe it the most? They did not believe. They had no faith. Why not? They had eyewitness testimony from credible witnesses they trusted.

Here’s why I think they didn’t believe. It’s the same reason people do not believe to this very day. Despite the fact of real and trustworthy evidence, I don’t think faith in the resurrection of Jesus Christ can be built on this kind of foundation. Nor can faith be built on internal subjective feelings, though I believe faith involves feelings.

Faith cannot be built on evidence that can be seen, added up, or somehow proven. As we see in the opening words of the eleventh chapter of Hebrews: “Faith is the substance things hoped for, the evidence of things not seen.” Faith is of another order entirely. Faith is the fruit of divine revelation. Do you remember when Peter made his famous confession of Jesus? “You are the Christ, the Son of the living God.” Do you remember what Jesus said to him? “Blessed are you, Simon Son of Joseph, for this was not revealed to you by flesh and blood but by my Father in Heaven.”

Are you tracking with me. This is a nuanced thing I’m trying to communicate which could be easily misunderstood. I believe the bodily resurrection of Jesus Christ is a fact of history. I also believe billions of people throughout history have enjoyed an internal subjective experience of the resurrection. Faith, however, is neither a fruit of historical evidence nor of the testimony of another’s subjective experience. Faith is the fruit of divine revelation wherein the Holy Spirit works in the human heart to convince one of a reality that could not otherwise be whole heartedly embraced.

“If you confess with your mouth that Jesus is Lord and believe in your heart that God raised him from the dead then you will be saved.” Romans 10:9.

Spirit of the Living God, fall afresh on me. Lord Jesus,    Melt me. Mold me. Fill me. Use me. For the glory of your name, Jesus. Amen.