What If They Found the Bones of Jesus? - Seedbed
close
Menu 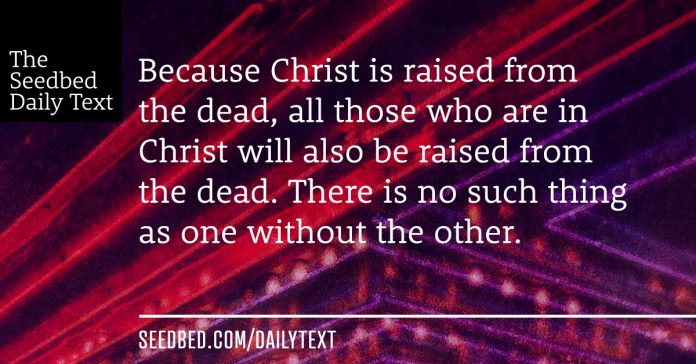 But if it is preached that Christ has been raised from the dead, how can some of you say that there is no resurrection of the dead? If there is no resurrection of the dead, then not even Christ has been raised. And if Christ has not been raised, our preaching is useless and so is your faith. More than that, we are then found to be false witnesses about God, for we have testified about God that he raised Christ from the dead. But he did not raise him if in fact the dead are not raised. For if the dead are not raised, then Christ has not been raised either. And if Christ has not been raised, your faith is futile; you are still in your sins. Then those also who have fallen asleep in Christ are lost. If only for this life we have hope in Christ, we are of all people most to be pitied.
But Christ has indeed been raised from the dead, the firstfruits of those who have fallen asleep. For since death came through a man, the resurrection of the dead comes also through a man. For as in Adam all die, so in Christ all will be made alive. But each in turn: Christ, the firstfruits; then, when he comes, those who belong to him. Then the end will come, when he hands over the kingdom to God the Father after he has destroyed all dominion, authority and power. For he must reign until he has put all his enemies under his feet. The last enemy to be destroyed is death. For he “has put everything under his feet.” Now when it says that “everything” has been put under him, it is clear that this does not include God himself, who put everything under Christ. When he has done this, then the Son himself will be made subject to him who put everything under him, so that God may be all in all.

It was my first class in my first year of seminary: “The Philosophy of Christian Religion.” Dr. Jerry Walls was the professor and one of my favorites. I will forever remember the jarring question he posed to the class on that first day. It went like this:

If today you received news of incontrovertible evidence that the bones of Jesus had been discovered, would you still retain your Christian faith?

He asked for a show of hands of those who would still believe, and practically every hand in the class shot up. People had obviously not accepted the hypothesis. He emphasized that we had to accept the hypothetical fact that the bones of Jesus had been discovered in order to respond to the question. Provided the verifiable truth of the claim that the bones of Jesus had been found, would you still have faith in Jesus Christ? Still all hands rose with certainty into the air. He asked a third time and to strengthen the hypothetical, he added that the likes of Billy Graham had verified the news. This time only one person lowered their hand. Dr. Walls championed this lone dissenter, looked at the rest of the class, and exclaimed, “With the exception of this one student, all of you are liberals.” (By this he meant that matters of faith are governed primarily by human experience rather than historical verities)

As one of the students whose hand was raised high I was stunned and yet quickly realized he was exactly right.

And if Christ has not been raised, your faith is futile; you are still in your sins.

If our faith is not anchored in the historical bodily resurrection of Jesus of Nazareth then we, as Paul put it, “are of all people most to be pitied.”

The resurrection of Jesus Christ is not a spiritual metaphor. Nor is it a mythical reality. While there is a substantial body of evidence that may be marshaled in support of the resurrection, it cannot ultimately be proven. It is a matter of faith. One either believes in the efficacious, historical, bodily resurrection of Jesus . . . or one does not. The former is a Christian. The latter is something else entirely.

I’ll leave it at that today.

Our Father in Heaven, hallowed be your name. Your Kingdom come. Your will be done; on Earth as it is in Heaven. On the third day He arose from the dead! Thank you for the resurrection of your son, Jesus Christ, who has won the victory. Come Holy Spirit and brand this truth into my heart and emblazon it in my mind until it forms the totality of who I am. In Jesus’ name. Amen.