What a Friend We Have in . . . Cornelius? - Seedbed
close
Menu 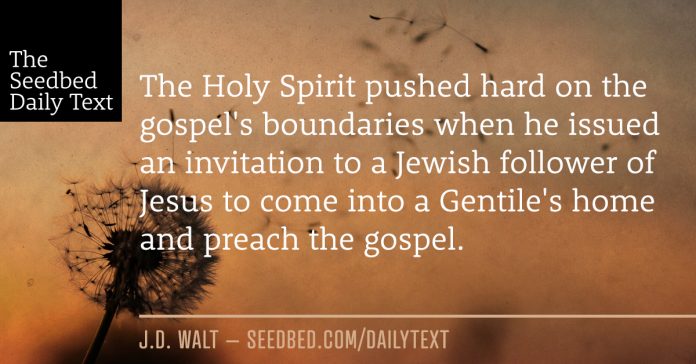 The next day Peter started out with them, and some of the believers from Joppa went along. The following day he arrived in Caesarea. Cornelius was expecting them and had called together his relatives and close friends. As Peter entered the house, Cornelius met him and fell at his feet in reverence. But Peter made him get up. “Stand up,” he said, “I am only a man myself.”While talking with him, Peter went inside and found a large gathering of people. He said to them: “You are well aware that it is against our law for a Jew to associate with or visit a Gentile. But God has shown me that I should not call anyone impure or unclean. So when I was sent for, I came without raising any objection. May I ask why you sent for me?”Cornelius answered: “Three days ago I was in my house praying at this hour, at three in the afternoon. Suddenly a man in shining clothes stood before me and said, ‘Cornelius, God has heard your prayer and remembered your gifts to the poor. Send to Joppa for Simon who is called Peter. He is a guest in the home of Simon the tanner, who lives by the sea.’ So I sent for you immediately, and it was good of you to come. Now we are all here in the presence of God to listen to everything the Lord has commanded you to tell us.”

Cornelius was a Centurion. A Centurion was a living symbol of the power of the Roman Empire and the enforcer of its unsettling peace. Remember the Centurion who came to Jesus asking for Jesus to heal his servant? Remember the Centurion at the Cross? They were the enforcers of the Roman occupation. For a devout Jew, a Centurion would probably rank just below a traitorous tax collector on the most hated list. Cornelius, to be clear, as a God-fearer, was exceptional. (A God-fearer was for all practical purposes a type of common law Jew—they observed some Jewish laws and customs but were not converts to Judaism because they were not circumcised.)

The Holy Spirit is pushing hard on the gospel’s boundaries, issuing an invitation to a Jewish follower of Jesus to come into a Gentile’s home and preach the gospel. This is a massive stretch; unprecedented really. The Apostle, in good apostolic form, is going yard (that’s baseball speak for “out of the park”). We need to feel the tension here. Peter knows they won’t like this back at headquarters. We are about to witness the most apostolical #BOOMSAUCE of the first century: A Gentile Roman Centurion conversion to Christianity.

Do we realize what’s happening here?

In television terms, today’s episode would be the Season Finale, leaving us in spellbinding suspense until next year. (In our case, keep in mind that we have it “on-demand,” and we will proceed with our binge viewing)

As the plot careens out of control, the screen fades black.

We are about to witness the shot heard round the world.

We are about to behold the doors of the Church of Jesus Christ opening to you and me.

Are you grasping the gravity of the situation here as the gospel prepares to go from Jerusalem to the ends of the Earth?