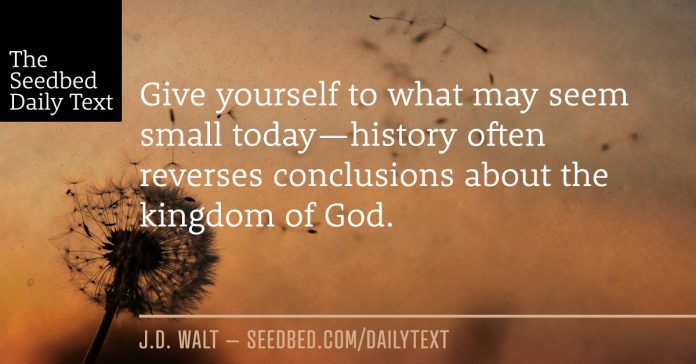 Three days after arriving in the province, Festus went up from Caesarea to Jerusalem, where the chief priests and the Jewish leaders appeared before him and presented the charges against Paul. They requested Festus, as a favor to them, to have Paul transferred to Jerusalem, for they were preparing an ambush to kill him along the way. Festus answered, “Paul is being held at Caesarea, and I myself am going there soon. Let some of your leaders come with me, and if the man has done anything wrong, they can press charges against him there.”After spending eight or ten days with them, Festus went down to Caesarea. The next day he convened the court and ordered that Paul be brought before him. When Paul came in, the Jews who had come down from Jerusalem stood around him. They brought many serious charges against him, but they could not prove them.

We must remind ourselves continually of our point of view as we read Scripture. It is so easy to read the present back into the past. We approach the text over two thousand years later. The church is ubiquitous. We find ourselves on the far side of the long fade of Christendom, that period of history where it became hard to distinguish the church from the state. In the North American context, it is still more common to identify as a Christian than not. Our politicians appeal to their conservative values in seeking to be re-elected. There may be more Bibles than people in this country alone.

What I’m getting at is our tendency to read the Bible with the point of view that Paul (or Jesus for that matter) was somehow at the center of culture and society of their day. If we aren’t self-critical about our own place and point of view we all too readily think everyone in the first century (save the detractors) accorded Paul the rock star status we tend to give him today in retrospect.

Sure, Paul mattered a lot to the young church, but the church was hardly a minority report in the first forty years of its existence. Sure, they were growing and making a few SportsCenter highlight reels here and there, but the overwhelming majority of the people in the world would still be in the dark.

This thing going on with Paul and the Jews and the Roman court system would have hardly been a blip on the radar screen of anyone. We must discard any assumption we have that this story was somehow newsworthy. Looking back from the twenty-first century, the whole thing unfolds before us as a stunning God-sized story of cosmic proportions. At the time, who even knew it was happening? And of those who knew, who really cared?

Looking back, the only reason we even know the names of Felix and Festus and half a dozen other bit players of history is Paul. That’s why we know them. History has its way, doesn’t it? That’s how history happens. It often takes the perspective of years to see what really mattered and what didn’t. At the time it’s impossible to know.

Remember that when you think about what you are doing today with your life. In the present it can seem oh so small and insignificant. I think that’s what Jesus was trying to get across when he talked to us about the mustard seed becoming the largest tree in the garden. Be encouraged, Christian! Don’t give up! Give yourself to what may seem small today. It’s worth it. It matters. You matter. Press on. Invest your resources in what many may consider a Kingdom of God long shot.

C.T. Studd put it well in the refrain from his famous poem, “Only one life, twill soon be past, only what’s done for Christ will last.”

Have you ever considered that you might possibly make history (directly or indirectly) from simply being obedient in the little things? Consider it.