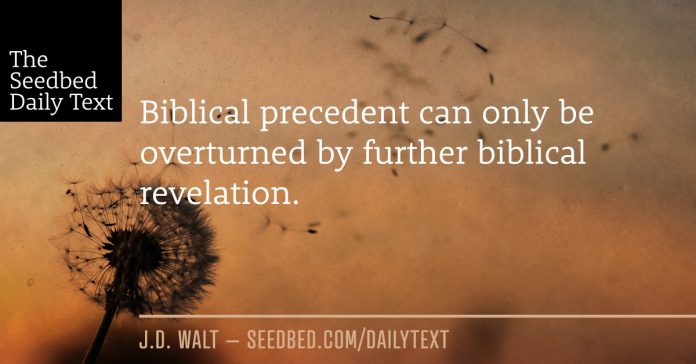 About noon the following day as they were on their journey and approaching the city, Peter went up on the roof to pray. He became hungry and wanted something to eat, and while the meal was being prepared, he fell into a trance. He saw heaven opened and something like a large sheet being let down to earth by its four corners. It contained all kinds of four-footed animals, as well as reptiles and birds. Then a voice told him, “Get up, Peter. Kill and eat.”“Surely not, Lord!” Peter replied. “I have never eaten anything impure or unclean.”The voice spoke to him a second time, “Do not call anything impure that God has made clean.”This happened three times, and immediately the sheet was taken back to heaven.

So what on earth does this vision given to Peter have to do with anything? We’ve got the servants of Cornelius, the God-fearing Gentile, on their way to get Peter. Peter is on the roof in a trance caught up in a vision and hearing a voice that basically tells him to set aside the Jewish dietary laws.

When God is about to do something that breaks precedent with the past, he moves decisively. There’s not a lot of grey in this vision. “Get up, Peter. Kill and eat.” The Spirit does something here in contravention of prior revelation. It’s a massive dilemma and because it is a massive dilemma Peter needs real clarity. He objects to the command. The voice speaks a second time, “Do not call anything impure that God has made clean.”

Far from the slow sliding proverbial “frog in the kettle” kind of process, this vision calls for immediate and catastrophic change. “Get up Peter. Kill and eat.”

Throughout history up to the present day, people attempt to bend biblical revelation to fit their own experience or to conform to the spirit of the age. This is not what is happening in this text. Biblical precedent can only be overturned by further biblical revelation. Human experience, reason, and church tradition, while helpful, can never be allowed to trump Scripture.

Get up Peter. Kill and eat.