The Most Important Question We Can Ask: The Brand, or the Branding?
close
Menu 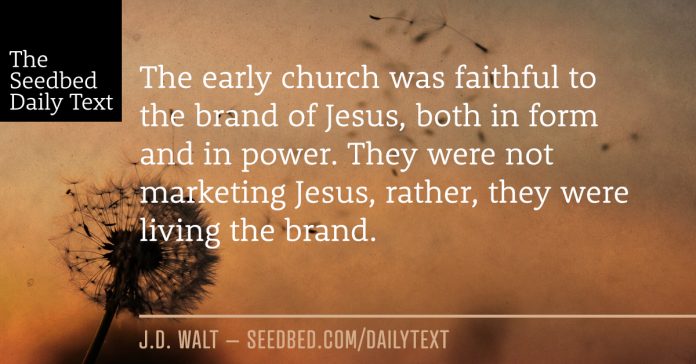 In Joppa there was a disciple named Tabitha (in Greek her name is Dorcas); she was always doing good and helping the poor. About that time she became sick and died, and her body was washed and placed in an upstairs room. Lydda was near Joppa; so when the disciples heard that Peter was in Lydda, they sent two men to him and urged him, “Please come at once!”

Peter went with them, and when he arrived he was taken upstairs to the room. All the widows stood around him, crying and showing him the robes and other clothing that Dorcas had made while she was still with them.

Peter sent them all out of the room; then he got down on his knees and prayed. Turning toward the dead woman, he said, “Tabitha, get up.” She opened her eyes, and seeing Peter she sat up. He took her by the hand and helped her to her feet. Then he called for the believers, especially the widows, and presented her to them alive. This became known all over Joppa, and many people believed in the Lord. Peter stayed in Joppa for some time with a tanner named Simon.

Years ago when Steve Jobs died we all asked the same question: Will Apple still be Apple in his absence? The verdict is still out on that question. Sure, the logo, look, and feel have continued. They still do the big product launches and keynote addresses, staying pretty true to the style guide. The great advertising and marketing haven’t missed a beat.

In other words, so far, Apple is maintaining the signature form of Apple, but that isn’t what we are asking. We want to know what remains “under the hood.” Our question is not about the form of the brand, but the brand’s power. Apple isn’t Apple because of their signature form. Apple is Apple because of the signature genius of their founder. Steve Jobs was and is, to a great extent, the brand of Apple. Steve Jobs is Apple. At least he was Apple.

One of the amazing things about the early church was their fidelity to the brand of Jesus, both in form and in power. They were not marketing Jesus, rather, they were living the brand.

Here’s the big question for us today: Are we extending the brand of Christianity or are we being the brand? If the former, it’s just about the branding. Here’s the test of the latter. Are we true to the mission or are we more about the marketing? There is an inverse relationship between mission and marketing. As the focus and concentration of mission decreases, the marketing budget and activities increase.

John Wesley, founder and leader of the once (Apple-esque) Methodist Movement expressed his prescient concern over just such a phenomenon happening in the future.

I am not afraid that the people called Methodists should ever cease to exist either in Europe or America. But I am afraid lest they should only exist as a dead sect, having the form of religion without the power. And this undoubtedly will be the case unless they hold fast both the doctrine, spirit, and discipline with which they first set out.

So how about you and me. Are we about the brand of Jesus or just the branding? Better Question: Do we understand ourselves as the brand of Jesus? It’s the difference between marketing and mission. It may be the most important question we could ask ourselves. Of course, the secret to it all are the following three words we keep praying . . .

What do you think of this relationship between the “brand” and “the branding?” What would it look like to truly embody the “brand” of Jesus?

© Seedbed 2021
The Most Important Question We Can Ask Ourselves: Are We the Brand, or the Branding?
MORE STORIES