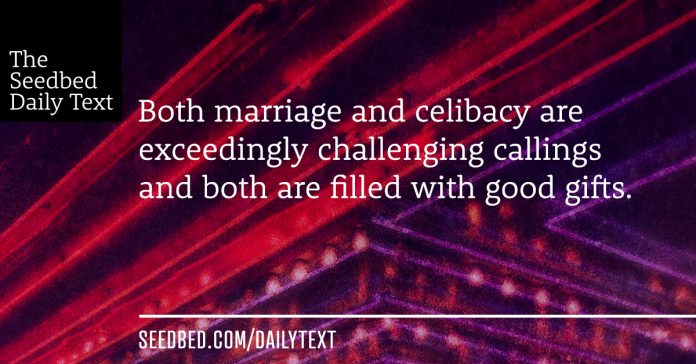 If anyone is worried that he might not be acting honorably toward the virgin he is engaged to, and if his passions are too strong and he feels he ought to marry, he should do as he wants. He is not sinning. They should get married. But the man who has settled the matter in his own mind, who is under no compulsion but has control over his own will, and who has made up his mind not to marry the virgin—this man also does the right thing. So then, he who marries the virgin does right, but he who does not marry her does better.

A woman is bound to her husband as long as he lives. But if her husband dies, she is free to marry anyone she wishes, but he must belong to the Lord. In my judgment, she is happier if she stays as she is—and I think that I too have the Spirit of God.

As you have noticed by now, throughout this letter in particular, Paul shifts in and out of different voices or points of view. At times he claims the inspiration of the Holy Spirit and the authority of God in his holdings. At other times, he owns his counsel as his own opinion and is careful to qualify it as such. In today’s text, Paul gets at the rationale behind his counsel to Christians to remain unmarried if possible, which he did not claim as the Lord’s counsel. Here’s the bottom line:

I am saying this for your own good, not to restrict you, but that you may live in a right way in undivided devotion to the Lord.

The big discipleship issue for Paul is developing an “undivided devotion to the Lord.” I have always appreciated the succinctness of the way the psalmist puts this idea. I’d encourage you to commit this prayer to the memory of your heart and pray it often.

Teach me your way, O Lord, that I may walk in your truth; give me an undivided heart to revere your name. (Ps. 86:11 NRSV)

Do married people necessarily have a divided heart when it comes to their devotion to the Lord? No. Do single people necessarily have an undivided heart when it comes to the Lord? No. In today’s and prior day’s texts, Paul is doing at least two things. On the one hand, he’s lifting the calling of celibacy as a legitimate way of serving the ministry of the gospel. In fact, it is Paul’s personal preference as evidenced by his own life and teaching. On the other hand, he raises the bar on marriage. He does this primarily through his authoritative teaching on divorce and remarriage. In all of it, Paul seems to counsel that if one is considering marriage, it’s a good choice but the most critical choice is whom to marry.

There are many questions that must be asked and explored in the discernment process of whether two people should marry or not, but one question towers above the rest. Will this person tend to aid you in cultivating and maintaining an undivided devotion to the Lord? Is this a person you can encourage and aid to maintain an undivided devotion to the Lord? It’s also a great intervening question to explore for those who are already married. Are you contributing to your spouse’s development of an undivided attention to the Lord or distracting from it? If change needs to happen on that front, how might it come about?

Both marriage and celibacy are exceedingly challenging callings and both are filled with good gifts. One is not to be elevated over the other in the kingdom of God, but both celebrated, honored, and affirmed. That said, I will end today with one of my favorite quotes on marriage from Tertullian, a leader of the church in the third century:

How beautiful, then, the marriage of two Christians, two who are one in hope, one in desire, one in the way of life they follow, one in the religion they practice. They are as brother and sister, both servants of the same Master. Nothing divides them, either in flesh or in spirit. They are, in very truth, two in one flesh; and where there is but one flesh there is also but one spirit. They pray together, they worship together, they fast together; instructing one another, encouraging one another, strengthening one another. Side by side they visit God’s church and partake of God’s Banquet; side by side they face difficulties and persecution, share their consolations. They have no secrets from one another; they never shun each other’s company; they never bring sorrow to each other’s hearts. Unembarrassed they visit the sick and assist the needy. They give alms without anxiety; they attend the Sacrifice without difficulty; they perform their daily exercises of piety without hindrance. They need not be furtive about making the Sign of the Cross, nor timorous in greeting the brethren, nor silent in asking a blessing of God. Psalms and hymns they sing to one another, striving to see which one of them will chant more beautifully the praises of their Lord. Hearing and seeing this, Christ rejoices. To such as these He gives His peace. Where there are two together, there also He is present; and where He is, there evil is not. (The Beauty of Christian Marriage)

Our Father in heaven, hallowed be your name. Your kingdom come. Your will be done, on earth as it is in heaven. I agree with the psalmist in the prayer, “Teach me your way, O Lord, that I may walk in your truth; give me an undivided heart to revere your name.” Come, Holy Spirit, and help me to understand the fullness of the calling you have placed on my life and make every provision necessary that it might be fulfilled. I want to do your will, Lord. In Jesus’ name, amen.

1. What is the present quality of your life before the Lord? Picture a spectrum with “Distracted” at the left end and “Undivided” at the right end. Where do you put yourself along the spectrum as relates to your relationship with God today?

2. How can you take a small step today to reunite your heart before the Lord? It’s another way of asking what might repentance look like? Another way of asking it would be, What in your present way of life needs to be realigned to move you toward an undivided devotion to Jesus Christ?

LAST CALL for orders of Wilderness: Global Pandemic Edition (midnight June 30). It’s going to be one for the ages. Your order will also help us finish a most difficult fiscal year with grace. PRE-ORDER HERE.