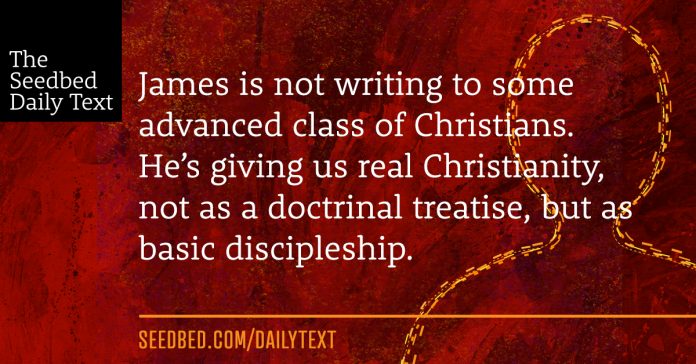 James. . . just James—his name is an inspired Word from God to us.

So who was James?

James is perhaps one of, if not “the,” most important leader in the early church. It sounds odd to say such a thing as most of us (present company included) have given James, the man, so little thought. We’ve read his book, likely been challenged by the gut punches of his exhortations and moved on to the more pastoral pastures of greener grass and still-er waters in other parts of the Bible.

After all, the rock stars of the New Testament are clearly Matthew, Mark, Luke, John, Peter, Paul and Mary. ;0) James hardly merits honorable mention among such characters, so our thinking goes. Why? James carries with him some inconvenient truths for the Church. For starters, he is the brother of Jesus, a small fact large parts of the church would rather sweep under the rug as it glaringly contradicts certain other doctrines about the “Mother of Jesus.”

Then there’s the celebrated Saint of the Reformation, Martin Luther, who rediscovered the great doctrine salvation by grace through faith and not from works. While James’ signature teaching that, “faith without works is dead,” in no way contradicts the biblical doctrine of Justification (i.e. salvation by grace through faith), Luther considered it an affront to the Gospel and famously regarded James’ work an “epistle of straw,” arguing at one point that it had no place in the Bible.

So how could I refer to James as perhaps the most important leader in the early church? James was the leader of the most significant church in the earliest days: the church at Jerusalem. The capital C Church was birthed in Jerusalem. It is from Jerusalem that the Word of God proceeded to the nations. When the debate came over whether and how Gentiles (i.e. most of us) could become part of the Church, they called the first Council of the Church to convene in Jerusalem. And yes, it was James who voiced the gracious motion to allow Gentiles entry into the Church without the deal-breaking requirement of circumcision and with only minimal observances of the Mosaic Law (i.e. no sexual immorality, no eating food polluted by idols and no eating blood, etc.) Without the Spirit-anointed leadership of James, the Jewish brother of the Jewish Jesus, the church at Rome might never have gotten off the ground. I’m not knocking Peter, but I do wonder what our church might look like today if we had considered James as our first Pope.

While it’s a bit more speculative to to ponder, James is one of the few people in the history of the world who could shed light on the mysteriously hidden “growing-up years” of his brother Jesus—on what it actually looked like for the Son of God to grow in wisdom and stature and the favor of God and man. While his lips are sealed on the subject, we can be assured he disciples us with this most rarified unwritten commentary running in the background of his imagination.

While much of the New Testament concerns itself with the general spread of the Gospel, James offers us something of an advanced course in discipleship—the real Christianity, where the proverbial rubber meets the road of faith. He will not pander to the “easy believism” of our time. Rather than coddle us in our catastrophes, James will challenge our loyalty to Jesus to the very core of our being right in the middle of them. I picture James as more Bear Bryant and less Mister Rogers; more Dr. Laura, less Oprah.

And maybe that’s more what we need in these times in which we live. Maybe we’ve assumed wrongly that seekers seek to be spoon-fed the faith. What if they are looking for the bare, naked truth? What if it’s more clear-cut discipleship they seek rather than more “New Member Classes?” (And speaking of testing our assumptions, we will get to more of those tomorrow).

Maybe the skyrocketing rise of the “nones” says more about us than them—that “none” doesn’t mean somehow bereft of faith but rather more akin to, “we will have “none” of what you are trying to pass off as the church.” As the American culture grows more hostile to the Christian faith and less hospitable to the Church we will undoubtedly begin to witness something of a threshing floor arise in our midst; a place where the proverbial wheat gets separated from the chaff.

James is not writing to some advanced class of Christians. He’s giving us real Christianity, not as a doctrinal treatise, but as basic discipleship. James offers us faith with works, mercy with justice, grace with truth and love with conviction. These are not dichotomies we hold in tension. They are realities we hold in union.

O.K., I’m getting carried away, so I’ll leave you with the potent words of the late G.K. Chesterton, who famously wrote, “The Christian ideal has not been tried and found wanting. It has been found difficult; and left untried.”

James. . . just James—his name is an inspired Word from God to us.

Somewhere in the future this is all that will remain of us, our name—the story it signifies, the truth it tells and the legacy it leaves . . . or not. No matter where we find ourselves in life’s ever changing trials and triumphs, we must be ever turning our ways into the way of Jesus. Though Jesus be the same yesterday and today and forever, he is ever on the move. Far from a static decision, this makes following him a constant movement. No matter how long or little, how well or wrongly we have followed him, may this year be known to the history of our name as the “year of the great turning” to the God and Father of our Lord Jesus Christ.

God our Father, we thank you for James, for his guts, his grit and his gall to say things to us no one else will. Thank you that he leads us to the real Jesus, whom we must have if we are to ever be like him. We pray in Jesus name. Amen.

1. What if we ceased thinking of going “deeper” in our discipleship as though it were some kind of option? What if there were only “growing” and “not growing,” “following Jesus” and “not following Jesus?” What would the implications be for you?
2. Do you have a “James” kind of person in your life or in your past? What do you remember about them? What was their influence on you?
3. Are you ready to say, “Be it therefore resolved, I will turn to Jesus, no matter what?” What action will most seal and communicate that conviction to yourself?