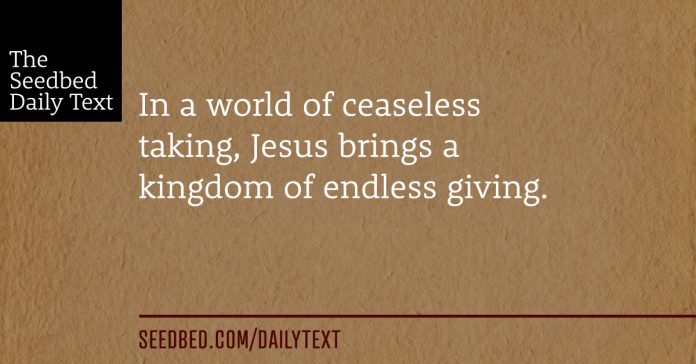 One day as Jesus was standing by the Lake of Gennesaret, the people were crowding around him and listening to the word of God. He saw at the water’s edge two boats, left there by the fishermen, who were washing their nets. He got into one of the boats, the one belonging to Simon, and asked him to put out a little from shore. Then he sat down and taught the people from the boat.When he had finished speaking, he said to Simon, “Put out into deep water, and let down the nets for a catch.”Simon answered, “Master, we’ve worked hard all night and haven’t caught anything. But because you say so, I will let down the nets.”When they had done so, they caught such a large number of fish that their nets began to break. So they signaled their partners in the other boat to come and help them, and they came and filled both boats so full that they began to sink.When Simon Peter saw this, he fell at Jesus’ knees and said, “Go away from me, Lord; I am a sinful man!” For he and all his companions were astonished at the catch of fish they had taken, and so were James and John, the sons of Zebedee, Simon’s partners.Then Jesus said to Simon, “Don’t be afraid; from now on you will fish for people.” So they pulled their boats up on shore, left everything and followed him.

I think for the longest time I thought of Jesus’ miracles as “proof” of his divinity. But when I reflect back on the temptation experience in the desert I must reevaluate. Remember, Satan was tempting Jesus to “prove” he was the Son of God by performing a miracle. Jesus refused and on each instance declared the Word of the Lord as his response.

Jesus isn’t out to prove his divinity with a show of power. No, Jesus is present to display the humanity of God through a display of the power of divine love. I think my earlier take on this story of the great catch is a good example of this misunderstanding. My former reasoning went like this. 1. Disciples didn’t catch any fish. 2. Jesus shows them he has power to catch fish. 3. Disciples leave fishing behind and follow Jesus. This reasoning doesn’t make sense. In this scenario it would seem to make more sense if Jesus taught them how to fish.

Here’s how I see it now. This story was not about nets and fishing. It was about calling and provision. These guys fished all night and caught nothing. No fish means no income. Jesus calls these men to leave their livelihoods behind and follow him instead; that he would teach them to fish for people. The miracle was actually an act of love. It was as if Jesus were not just telling them they could trust him; he was showing them they could trust him. They went from no fish after a night’s work to catching so many fish it not only filled up one boat but two boats and almost sank them both. I don’t know what fish sold for in those days but I think it’s a safe bet to say this kind of “haul” would support their families for months.

To be sure, we are seeing a display of awesome power, but the bigger deal is the demonstration of divine love. These men could leave their nets behind without leaving their families in a bind. It’s why when Jesus said, “Seek first the Kingdom of God and his righteousness and all these things will be given unto you,” it was not a platitude but a proven fact. Jesus walked straight into the heart of scarcity (i.e. no fish) and transformed it into overwhelming abundance (i.e. more fish than they could handle). All they needed to do was to obey his absurd request to go to the deeper water, where no fish in their right mind would be swimming in broad daylight, and cast out their nets they had already been mended and cleaned for the next night’s fishing trip (where any fish in their right mind who happened to be in the deep water would see it). What was quite confounding to these professional fishermen turned out to be a source of incredible confidence. They were awed by this display of power but their obedience was won by the demonstration of love. It was as though he gave them a big bag of money and then said, “Trust me. I’ve got this. Now let’s go do something extraordinary together.”

If I were them, I might have been thinking, “How can we get Jesus to go fishing with us again tonight?” That would be attempting to use power for my own purposes. Jesus enters the every day world of our lives, demonstrates his trustworthy love and invites us into our destiny, which can only be found in following him. He will make our existence about so much more than providing for ourselves. He will transform our very lives into provision for others. In a world of ceaseless taking, he brings a Kingdom of endless giving.

When we get close enough to see this happen, and it still happens every day, it causes a holy OMG moment. (in case you aren’t aware, that’s text-speak for Oh My God!) Isn’t that what happened to Peter?

When Simon Peter saw this, he fell at Jesus’ knees and said, “Go away from me, Lord; I am a sinful man!” For he and all his companions were astonished at the catch of fish they had taken, and so were James and John, the sons of Zebedee, Simon’s partners.

And instead of Jesus “going away,” he says just the opposite: Come with me!

Then Jesus said to Simon, “Don’t be afraid; from now on you will fish for people.” So they pulled their boats up on shore, left everything and followed him.

We don’t trust Jesus in order to get him to do something for us. We trust Jesus because of what he has already done in us. He’s the Master Angler of them all.

This journey is not about blind trust. It’s about eyes open faith moving in the power of love. And so we go . . . onward to Transfiguration Mountain. I’ll see you tomorrow in the next town over.