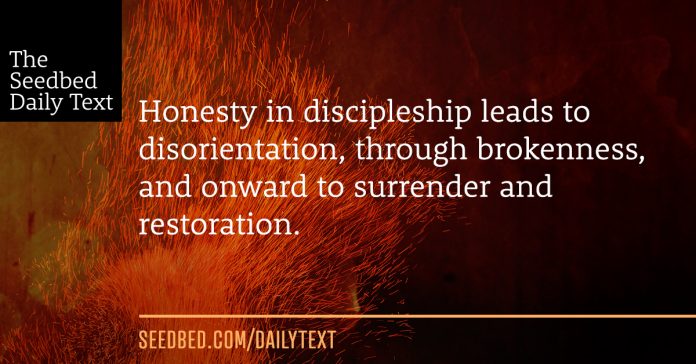 66 While Peter was below in the courtyard, one of the servant girls of the high priest came by. 67 When she saw Peter warming himself, she looked closely at him.

“You also were with that Nazarene, Jesus,” she said.

68 But he denied it. “I don’t know or understand what you’re talking about,” he said, and went out into the entryway.

69 When the servant girl saw him there, she said again to those standing around, “This fellow is one of them.” 70 Again he denied it.

After a little while, those standing near said to Peter, “Surely you are one of them, for you are a Galilean.”

71 He began to call down curses, and he swore to them, “I don’t know this man you’re talking about.”

72 Immediately the rooster crowed the second time. Then Peter remembered the word Jesus had spoken to him: “Before the rooster crows twice you will disown me three times.” And he broke down and wept.

Do you remember those early days soon after Peter first met Jesus? They were cleaning their nets after a night of catching nothing when Jesus approached and told them to throw their nets out into the deep waters. It led to a miraculous catch of fish. Luke records Peter’s response as follows:

When Simon Peter saw this, he fell at Jesus’ knees and said, “Go away from me, Lord; I am a sinful man!”

Do you remember that day when Peter made his famous confession of Christ at Caesarea Philippi? Matthew has it this way:

Simon Peter answered, “You are the Messiah, the Son of the living God.”

Then there was that time just a few days ago at the Last Supper when Jesus told his disciples they would all abandon him.

Peter declared, “Even if all fall away, I will not.”

“Truly I tell you,” Jesus answered, “today—yes, tonight—before the rooster crows twice you yourself will disown me three times.”

But Peter insisted emphatically, “Even if I have to die with you, I will never disown you.”

It brings us to today’s text with Peter being confronted in the courtyard of the home of the Chief Priest.

Denial #1: “I don’t know or understand what you’re talking about,”

Denial #2: When the servant girl saw him there, she said again to those standing around, “This fellow is one of them.”  Again he denied it.

Denial #3: He began to call down curses, and he swore to them, “I don’t know this man you’re talking about.”

There’s a progression of discipleship here in the life of Peter. I think it’s common to most pathways of discipleship. It began with his early encounters of Jesus and his profound experience of humility. It’s interesting though how being humbled doesn’t always translate into long term humility. We can follow Jesus for years, thinking we are his ultimate insiders, while our veiled pride actually keeps us following at a distance. Somewhere along the way, by the mercy of God, we hit a wall. It might be a testing of our metal where we come up lacking. It may be a midlife crisis or even better, a midlife awakening. Whatever it is, we are brought face to face with an emptiness we once mistook for fullness.

Betsy, a member of our Daily Text community, corresponds with me regularly to share thoughts and insights. Just the other day she wrote and shared a story of a trip to Israel and visiting three classic statutes of Peter. Here’s Betsy (with her permission) in her own words.

The first is outside Capernaum and shows Peter as “The Rock” who has it all together—at that point in time that was who I used to be. The second is in Jerusalem after Jesus’ arrest when he “followed at a distance.” I could very much relate to the confusion shown in Peter’s face of, “I thought I had this all figured out, but yet nothing is making sense.This is not how it was supposed to play out. I don’t know what to do. I don’t know what to believe.” The third statue commemorates when Peter met Jesus on the shores of the Sea of Galilee after the resurrection. I instinctively knew that was where I needed to get to. I found it interesting that most of us in the group felt like our visit to the site of the third statue was way too short. There was a need to stay longer and wait.

There’s nothing like honest discipleship. Betsy shows us what the second half of the gospel journey looks like. It presses past an easy self confidence parading as faith. It leads to disorientation and through brokenness and onward to surrender and restoration.

Spirit of the Living God, fall afresh on me. Lord Jesus, we so often think we are waiting on you only to learn you have been waiting on us all the while. Thank you for patiently leading us and allowing us to discover your depths according to our readiness. Melt me. Mold me. Fill me. Use me. For the glory of your name, Jesus. Amen.

I wonder where you find yourself on the journey today. What holds you back? Sometimes all it takes is simple honesty with ourselves before God to get unstuck. What might that look like for you today?