When the Kingdom Comes to the Empire - Seedbed
close
Menu 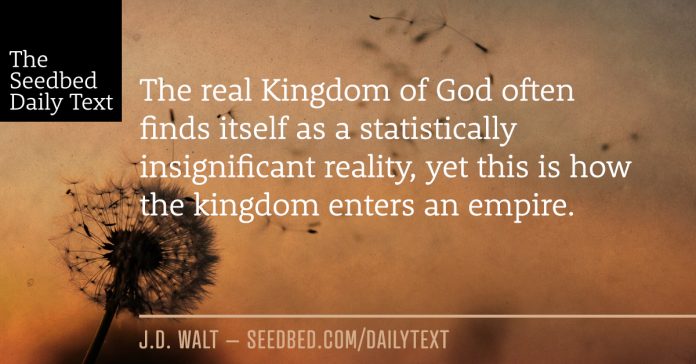 And so we came to Rome. The brothers and sisters there had heard that we were coming, and they traveled as far as the Forum of Appius and the Three Taverns to meet us. At the sight of these people Paul thanked God and was encouraged. When we got to Rome, Paul was allowed to live by himself, with a soldier to guard him.

Here’s a seed thought for today.

When Paul arrived in Rome he likely found no more than a hundred believers in a city of perhaps a million people. To say Paul and the fledgling church in Rome was an underdog would be the understatement of the first century. The real Kingdom of God often finds itself as a statistically insignificant reality, yet this is how the kingdom enters an empire.

It calls to mind this word from Jesus, “The kingdom of heaven is like a mustard seed, which a man took and planted in his field. Though it is the smallest of all seeds, yet when it grows, it is the largest of garden plants and becomes a tree, so that the birds come and perch in its branches.” (Matthew 13:31-32)

That’s the story of Rome. Empires rise and fall. The Kingdom of Heaven is forever.

As Revelation 11:15 says, “The seventh angel sounded his trumpet, and there were loud voices in heaven, which said: “The kingdom of the world has become the kingdom of our Lord and of his Messiah, and he will reign for ever and ever.”