Living in the Light of the Larger Story - Seedbed
close
Menu 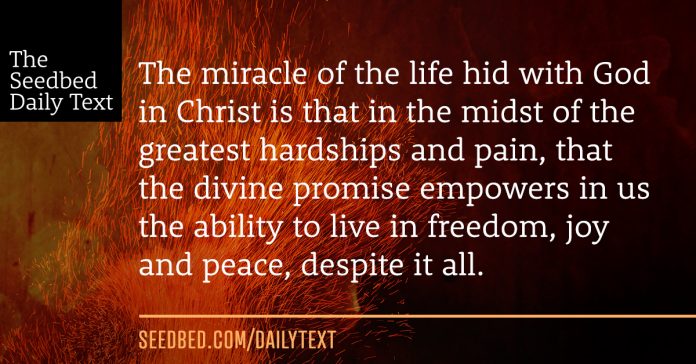 As they approached Jerusalem and came to Bethphage and Bethany at the Mount of Olives, Jesus sent two of his disciples, 2 saying to them, “Go to the village ahead of you, and just as you enter it, you will find a colt tied there, which no one has ever ridden. Untie it and bring it here. 3 If anyone asks you, ‘Why are you doing this?’ say, ‘The Lord needs it and will send it back here shortly.’”

4 They went and found a colt outside in the street, tied at a doorway. As they untied it,5 some people standing there asked, “What are you doing, untying that colt?” 6 They answered as Jesus had told them to, and the people let them go. 7 When they brought the colt to Jesus and threw their cloaks over it, he sat on it. 8 Many people spread their cloaks on the road, while others spread branches they had cut in the fields. 9 Those who went ahead and those who followed shouted,

“Blessed is he who comes in the name of the Lord!”

10 “Blessed is the coming kingdom of our father David!”

“Hosanna in the highest heaven!”

It is really challenging (if not impossible) to read the Gospel from the front side, going through it for the first time as an unknowing pilgrim reader. We know how the story ends and because of that we tend to interpret the story from the vantage point of knowing the ending. We call it a “triumphal entry” only because we know the resurrection on the other side. But imagine heading into it all without knowing.

It’s interesting how our lives are lived in just the opposite fashion. We don’t know how it will all turn out and so we can only interpret the future from the perspective of the past, and because to one degree or another, we have a broken past we tend to see the future through broken lenses.

Of course, this is where our faith comes into play. Faith means we do know how it will all end up, because we know the bigger story in which the smaller stories of our lives are being played out. Faith means living in the here and now in the distinctive kinds of ways (i.e. Christian) one would live if they knew ahead of time how the story would end. In the case of the Christian story, that’s why we have the possibility of such freedom, joy and peace. In fact, if we don’t presently enjoy some level of freedom, joy and peace in the present we might want to ask ourselves some deeper questions about whether we really do have faith in the way it will all turn out (or if our freedom, joy and peace is just the best version that money can buy).

However, when we are living in the here and now in the distinctive kinds of ways (i.e. Christian) we would live if we knew ahead of time how the story would end, the people around us will often not understand. Why? Because we will be living in ways that are counterintuitive to the ways of the world. It’s why Jesus disciples his disciples in these distinctive kinds of ways– like the last will be first, and the one who serves will be the greatest, and whoever loses their self for my sake will find it. This is not some bloated idealism. This is the way of faith. This is the way human beings were intended to live. And Jesus shows us the possibility of all of it. As I have said many times now on the Daily Text,  “As Jesus was on earth, so we are becoming,” and, “Come Holy Spirit!”

So what does all of this have to do with today’s text? Thanks. Nothing and everything. As Jesus sat atop that donkey and rode into Jerusalem, no one around him had any idea of what he was really doing. They thought they did. They had some kind of outcome in mind, but they were wrong. They had a good sense of how the big story would end, but they completely misunderstood how it would ultimately get there. In fact, the complete opposite happened. Their leader was executed as a common criminal. And all of this despite Jesus telling his disciples explicitly what was going to happen.

Only Jesus knew what lay ahead in Jerusalem and beyond and he knew how it would all end, yet he still had to live it out by faith. This is why later in Scripture he is called the “author and pioneer of our faith.” He is the One who walked the way, living in the here and now in the distinctive kinds of ways one would live if they knew ahead of time how the story would end.” That’s why we follow him. That’s why we keep our eyes fixed on him. It’s why we can agree with Paul [that] “our light and momentary troubles are achieving for us an eternal glory that far outweighs them all.” 2 Corinthians 4:17.

The miracle of the life hid with God in Christ is that in the midst of the greatest hardships and pain, that the divine promise empowers in us the ability to live in freedom, joy and peace, despite it all.

Spirit of the Living God, fall afresh on me. Lord Jesus, you are the weight of eternal glory who outweighs all of my temporary suffering and tragedy and hardship. Because you are the Alpha and the Omega, I can make it through this in-between place not by gritting my teeth but in the joy of your being with me, right here and right now. Train me to live by faith in this place of trial as the ever present place of your triumphal entry. Melt me. Mold me. Fill me. Use me. For the glory of your name, Jesus. Amen.

What kind of outlook do you have on the future? Is it filled with hope despite what you presently see? Or is your outlook fueled by mere optimism and positive thinking? Do you see the glorious end despite the inglorious middle you may presently face?