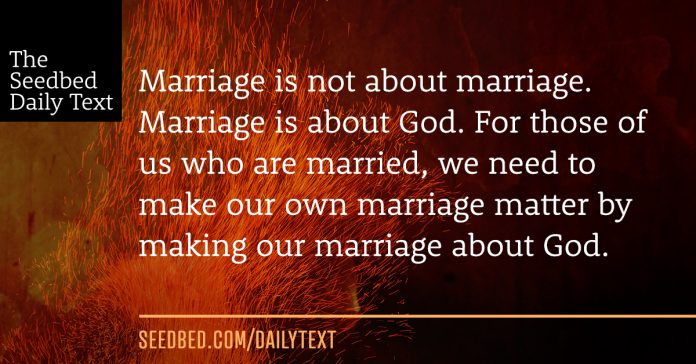 21 Finally the opportune time came. On his birthday Herod gave a banquet for his high officials and military commanders and the leading men of Galilee. 22 When the daughter of Herodias came in and danced, she pleased Herod and his dinner guests.

The king said to the girl, “Ask me for anything you want, and I’ll give it to you.” 23 And he promised her with an oath, “Whatever you ask I will give you, up to half my kingdom.”

“The head of John the Baptist,” she answered.

25 At once the girl hurried in to the king with the request: “I want you to give me right now the head of John the Baptist on a platter.”

26 The king was greatly distressed, but because of his oaths and his dinner guests, he did not want to refuse her. 27 So he immediately sent an executioner with orders to bring John’s head. The man went, beheaded John in the prison, 28 and brought back his head on a platter. He presented it to the girl, and she gave it to her mother. 29 On hearing of this, John’s disciples came and took his body and laid it in a tomb.

So what’s all the fuss about Herod’s marriage? Warning: This is definitely TV-MA.

Herod the Great had a son, Aristobulus, who later went on to have a daughter. Her name was Herodias. You may want to get a piece of paper and diagram this. It gets complicated fast.

Herod the Great had another son, known as Herod II, who later married Herodias. Yes, that means she married her uncle. Together they had a daughter named Salome, the “stripper” making an appearance in today’s text.

Herod the Great had yet another son, known as Antipas, who was the Herod at issue in today’s text. This Herodian dynasty had more of a family forest than a family tree.

As the story goes, Antipas visited Rome to see his brother Herod II at which time he apparently “stole” his wife, Herodias. Did I mention Antipas was already married? No problem—nothing a quick divorce can’t solve, right? (This is starting to sound strangely familiar.)

Now, if I’ve got my facts right, Antipas was not only stealing his brother’s wife, he was also marrying his niece. It seems by any standards to call this an “illicit” marriage would be more than warranted. For Jews, it would have been outright anathema. Why? I was with a friend yesterday who put it this way: “Marriage is not about marriage. Marriage is about God.”

So you’ve got the picture. Herodias and Salome set up shop in the palace of Antipas. When John got wind of this, he went ballistic. Why did John have to rail against this illicit and adulterous marriage? Because “marriage is not about marriage. Marriage is about God.” It would have been a lot easier for John to have gone about his seemingly more important business of heralding God’s Kingdom than taking issue with a politician’s marriage. At minimum he would have “kept a good head on his shoulders” a lot longer. John, however, held an uncompromising conviction about marriage being about God, making an offense against marriage an offense against God. He could not be silent.

Because of Antipas’ appreciation for John, we might reasonably assume John was making headway with him on this front. Why else would Herodias and Salome hate John so much. They were the ones who stood to lose everything. Who knows, Antipas may have eventually repented. They weren’t taking any chances. They wanted his head. So Herodias and Salome, a.k.a. Antipas’ wife and step daughter, a.k.a. Antipas’ niece and grand niece, hatched a plan. Herodias sent Salome to do a “sexy dance” for her Grand Uncle. Apparently, Uncle Antipas had quite the fetish for dirty dancing, and surely he’d had way too much to drink. He pledged to his step-daughter/grand-niece anything she wanted up to half of his kingdom. My immediate response to such an offer: “I’ll take half of your kingdom.” To show you how powerful the toxic mix of fear and hatred, they chose revenge. Instead of a massive trust fund for Salome, Herodias opted for John’s head.

O.K., there’s a small problem I failed to note. Antipas’ former wife, the one he divorced, was an Arabian princess. That means her father was an Arabian King. It’s never a good thing to have an Arabian King mad at you, especially because you dumped his daughter. This King declared war on Antipas and it cost him dearly.

Spirit of the Living God, fall afresh on me. Lord Jesus, could that be right—marriage is not about marriage but about God? If so, search out our own marriages and heal them. And if so, deepen our convictions about marriage, which is to say deepen our convictions about you, and teach us how to hold those convictions with grace and truth in the world we live in. Melt me. Mold me. Fill me. Use me. For the glory of your name, Jesus, Amen.

So if marriage is not about marriage but about God, what implications does this have for you? For marriage? For the Church? For the culture?