The Mind of Christ Is the Cross - Seedbed
close
Menu 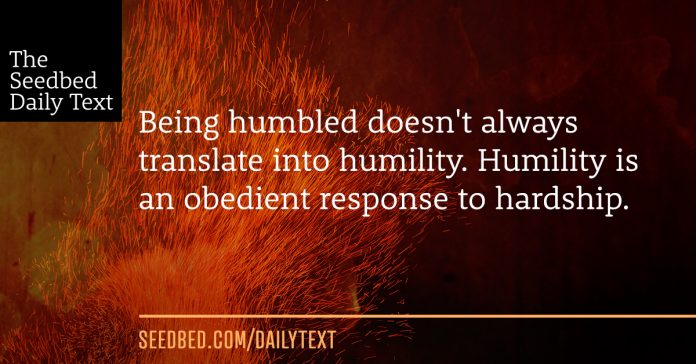 27 They crucified two rebels with him, one on his right and one on his left. [28]  29 Those who passed by hurled insults at him, shaking their heads and saying, “So! You who are going to destroy the temple and build it in three days, 30 come down from the cross and save yourself!” 31 In the same way the chief priests and the teachers of the law mocked him among themselves. “He saved others,” they said, “but he can’t save himself! 32 Let this Messiah, this king of Israel, come down now from the cross, that we may see and believe.” Those crucified with him also heaped insults on him.

Complete and utter forsakenness. Betrayed by Judas. Denied by Peter. Abandoned by the Twelve. Convicted by the Sanhedrin. Condemned by Pilate. Crucified by soldiers. Insulted by passers by. Mocked by the chief priests and the teachers of the law. Insulted by his companions on crosses.

Tomorrow it will be, “My God. My God, why have you forsaken me?”

Never before and never since has something so bad happened to someone so good.

So why did we hate him so much? What did he do to deserve such vitriol?

In the end, he was left absolutely alone.

Whatever it is that you are going through right now, no matter how warranted or undeserved it may be, he understands.

During the days of Jesus’ life on earth, he offered up prayers and petitions with fervent cries and tears to the one who could save him from death, and he was heard because of his reverent submission. Son though he was, he learned obedience from what he suffered and, once made perfect, he became the source of eternal salvation for all who obey him. Hebrews 5:7-9.

In Paul’s letter to the church at Phillipi he exhorted the believers to “have the same mind in them that was in Christ Jesus.” Then he particularized what this meant:

Who being in very nature God, did not consider equality with God something to be grasped; but made himself nothing. And taking on the nature of a slave, being made in human likeness and found in the appearance of a man, he humbled himself and became obedient to death; even death on a cross. Philippians 2

When we consider the suffering of Jesus in his crucifixion, we immediately think about it through the lens of him doing this for us, and this is true. Paul seems to be taking it a lot further than that. He is asking us to have the same mind in us. Clearly, we cannot do what Jesus did in a way that would redeem others, but we can do what Jesus did in ways that extend his redemptive work to others.

How would we do this? It will not start with our actions but with our mentality. We can begin to grasp the mind of Christ simply by watching him and observing the grace with which endured all he endured.

What might that mean for us; to endure the trials and tribulations we face with the mentality of the mind of Christ? What might it look like to humble ourselves? And be clear, being humbled doesn’t always translate into humility. Humility is an obedient response to hardship. What might it look like to lay aside our mentality of, “Why is this happening to me?” in order to take up the mind of Christ, who endured all things with a patient trust in the ultimate outcome.

And let’s not forget the rest of the story:

Therefore, God highly exalted him and gave him the name that is above every name, that at the name of Jesus every knee should bow, in Heaven and on Earth, and under the Earth, and every tongue confess that Jesus Christ is Lord to the glory of God the Father. Philippians 2

Think about a present trial or hardship you are going through, a cross you are bearing. Would it change your approach to this difficult season to know that the mentality with which you handle it could reveal something of the nature and love of God to someone who is paying attention? What might it mean for you to “have the same mind in you that was in Christ Jesus” in the midst of this suffering?

Spirit of the Living God, fall afresh on me. Lord Jesus, I want to know you, and the power of your resurrection, and the fellowship of sharing in your sufferings, becoming like you in your death, that your life might illuminate mine completely. Melt me. Mold me. Fill me. Use me. For the glory of your name, Jesus. Amen.

Think about a present trial or hardship you are going through, a cross you are bearing. Would it change your approach to this difficult season to know that the mentality with which you handle it could reveal something of the nature and love of God to someone who is paying attention? What might it mean for you to “have the same mind in you that was in Christ Jesus” in the midst of this suffering?

© Seedbed 2021
The Mind of Christ Is the Cross
MORE STORIES