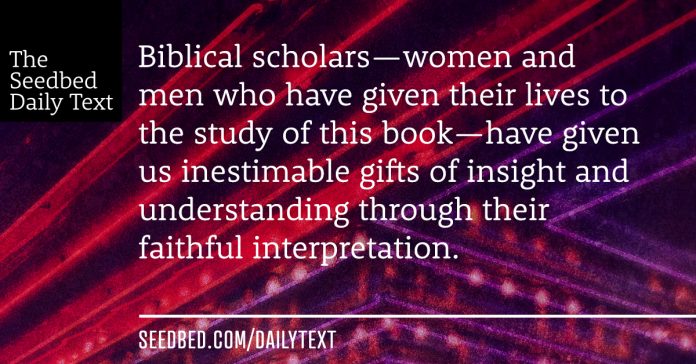 To the married I give this command (not I, but the Lord): A wife must not separate from her husband. But if she does, she must remain unmarried or else be reconciled to her husband. And a husband must not divorce his wife.

To the rest I say this (I, not the Lord): If any brother has a wife who is not a believer and she is willing to live with him, he must not divorce her. And if a woman has a husband who is not a believer and he is willing to live with her, she must not divorce him. For the unbelieving husband has been sanctified through his wife, and the unbelieving wife has been sanctified through her believing husband. Otherwise your children would be unclean, but as it is, they are holy.

The Bible is an exceedingly complex book. One of the great gifts of the Protestant Reformation was that the Bible was made accessible to people outside of the priesthood. In many ways, the Bible can be understood by anyone. This is referred to as the “perspicuity,” or transparent, reading of the text. In other words, it means what it plainly says and a person doesn’t need a graduate degree to understand it. In another sense, we are dealing with an ancient text written over the course of fifteen hundred years, on three continents, in three different languages (none of which are still spoken), by more than forty different authors. And did I mention the one book we call the Bible is actually sixty-six different individual books/letters in and of themselves? Through the centuries, biblical scholars—women and men who have given their lives to the study of this book—have given us inestimable gifts of insight and understanding through their faithful interpretation.

Every day I write the Daily Text with a deep sense of responsibility both to God and to you, my readers. I write it prayerfully and yet I do not write it alone. I stand on the shoulders of two thousand years worth of biblical study and interpretation. I stand on the shoulders of scholars who have worked tirelessly to “rightly divide the word of truth”; one generation faithfully handing the baton to the next. Dr. Gordon Fee, a renowned Bible scholar from the Pentecostal tradition, teaches me daily from his work on 1 Corinthians. In seminary, I sat under the biblical instruction of Dr. Ben Witherington III whose teaching on 1 Corinthians continues to shape my approach and understanding of the text.

To be clear, some biblical scholars have done inestimable damage to the church’s interpretation and understanding of Scripture. We need not let their misguided (albeit often well-intentioned) work taint our trust in the whole enterprise of biblical interpretation. The answer to bad teaching is not no teaching. It is good teaching.

Some of you may be accusing me of these last few paragraphs as a stall tactic and a diversion from dealing with a really challenging text on remarriage and divorce. ;0) I will grant you it is a difficult passage and subject to rife misinterpretations. As I’ve indicated before, the venue and genre of the Daily Text doesn’t lend itself to the more complex matters of biblical interpretation.

I say all this to point out something very important and easily missed in this seventh chapter of the letter: the context. It’s important to recognize Paul is not setting out to write Canon Law on marriage and divorce for the church. We must remember what 1 Corinthians is—an ancient letter. As well, we must remember it is actually part of a larger trail of correspondence between Paul and this church. We have two of what may be as many as four or more letters in that exchange. This letter is a direct and somewhat detailed response to the letter sent to Paul by the church which was ostensibly a response to Paul’s earlier letter to them.

Now, the contextual feature that often gets completely ignored in the interpretation of 1 Corinthians 7 is the opening line.

Now for the matters you wrote about: “It is good for a man not to have sexual relations with a woman.”

In all that follows, Paul is responding to this statement from their letter to him. He delves into tangential matters and at times claims authority and at other times simply asserts his own opinion. The bottom line is that Paul is dealing with a situation in which it seems women wanted to dissolve their marriages because of their highly spiritualized understanding of life derived from the ever present “wisdom” teachings in Corinth. They have been called the “eschatological women,” because they believed they had already realized the “resurrection of the dead” in a spiritualized form and that they existed spiritually in the realm of angelic beings with all sorts of spiritual powers. In this spiritualized state, the body was of no use and marriage and sex and the like were distractions from the “former age” that for them had passed away. And just because Paul is addressing a very particular issue in first-century Corinth does not mean it has no application for us today. The point is the context conditions the application for us; sometimes in massive ways and other times in nuanced distinctions.

If we can’t understand what Paul’s letter meant to the Corinthians in the first century, we have little hope of properly understanding it in the twenty-first century, and, in fact, we are in grave danger of bringing in our own extra-biblical understandings of divorce and remarriage, and thereby making the text mean something it never intended to mean. For instance, texts like today’s have been egregiously misappropriated in ways that shame women into remaining in abusive marriages.

Are you seeing the complexity of this? This is why we need sound, faithful biblical scholars in the church. If you know one, call them today and thank them for the exceedingly challenging, hidden, and too often thankless labor of their life. It matters greatly.

Our Father in heaven, hallowed be your name. Your Kingdom come. Your will be done on earth as it is in heaven. Thank you for your Word and for the countless men and women who have given their lives to scribally transmit it across the ages, to translate it for every nation, tribe and tongue, to exegete and interpret it with deep devotion and exquisite care. Convict us all to take Scripture more seriously. Our life depends on it. In Jesus name, Amen.

1.  Do you tend to trust or suspect the work of biblical scholars? Why?

2.  Are you growing in the conviction that the better and more careful we are able to read Scripture the better disciples we will become?