Who Needs the Weather Channel When You've Got Jesus? - Seedbed
close
Menu 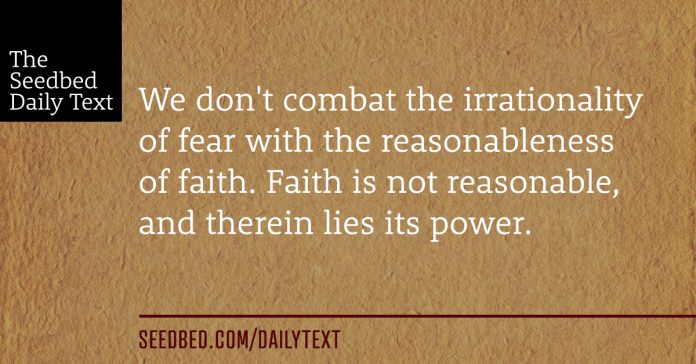 One day Jesus said to his disciples, “Let us go over to the other side of the lake.” So they got into a boat and set out. As they sailed, he fell asleep. A squall came down on the lake, so that the boat was being swamped, and they were in great danger.The disciples went and woke him, saying, “Master, Master, we’re going to drown!”He got up and rebuked the wind and the raging waters; the storm subsided, and all was calm. “Where is your faith?” he asked his disciples.In fear and amazement they asked one another, “Who is this? He commands even the winds and the water, and they obey him.”

Can you believe this? Even the winds and the waves obey him? Somebody’s got to write a book about all this. Oh, wait; that’s what we are reading isn’t it? We must remember, though, we are only getting snapshots of this Story. I like the way John put it near the end of his Gospel,

Jesus did many other things as well. If every one of them were written down, I suppose that even the whole world would not have room for the books that would be written. (John 21:25)

And remember, Jesus never shows off. He’s not saying, “Watch this!” In fact, in many cases he’s actually urging people to, “Don’t tell.” Jesus does miracles to accomplish his mission in ways that manifest the nature and character of God. Jesus does miracles to save people. Today’s text features another example.

First observation: Jesus took a nap. Isn’t that great? God naps. Do you nap? I’m guessing not. One simple way we could all be more like Jesus would be to nap. The key is knowing when to nap and when not to nap. Remember that time the disciples decided to take a nap in the Garden of Gethsemane when Jesus was about to die from grief; that time he begged them to stay up with him? Bad time to nap. It’s also never a good idea to nap when you are driving. But on the whole, napping is good.

Second observation: This was a bad storm. “Swamped” is code word for, “this boat is going down.” Chaos reigned (and rained) and Jesus slept. These men truly thought they were going to die by drowning. They had to wake Jesus up. The disciples were terrified. Jesus was not worried in the least.

Third observation: Jesus not only had a deep sense of peace. He was himself, Peace. Jesus spoke to the storm in the same way he would speak to a demon. In fact, in ancient times, chaotic waters were often associated with demonic powers. With his words, he spoke his deepest essence to the storm. Other Gospels have him saying, “Peace! Be Still!” to the wind and the waves. He spoke his internal reality to the external situation. I’ve tried this before and it didn’t work. What if I was speaking out of a reality I could not claim as my own. If I say “Peace” and there is no peace within me, I am speaking hollow words who have neither authority nor power.

Bottom line for these disciples and for us: Jesus wants us to become Peace. He wants us to be Peace in the midst of chaos; His Peace. You see, if Jesus is Peace and Jesus is in you and me that makes you and me Peace. There’s nothing quite like a person of true Peace. And maybe the biggest lesson of all here: Peace does not mean the absence of chaos or danger. Peace means the presence of God. The “Peace of God” we are told in another text, surpasses our ability to understand. It doesn’t make sense. How can you be so at ease when everything around you is coming apart at the seams? That’s who Jesus is. Jesus is our Peace

This whole ordeal was the disciples’ first real test in Luke’s Gospel. At every turn, from cleansing the chaos of leprosy, to casting out the chaotic presence of demons, to healing the chaos of paralysis, to reversing the chaos of death, Jesus had given his disciples every possible reason to place their faith in him. They failed. In response to it all, he asked them this question,

“Where is your faith?”

The final thing I learn from today’s text is this: Bad weather is a given. Sooner or later we run into a storm. Before we are going to calm any storms, we must learn to rebuke our fear. Danger and difficulty and struggle are a given. Fear is real and often quite justified. Fear is not rational, but then neither is faith. We don’t combat the irrationality of fear with the reasonableness of faith. Faith is not reasonable, and therein lies its power. Faith is love taking on impossible odds in the name of an invincible God.

Do you believe this? The question Jesus asked his disciples in the boat that day is the same question he asks us today,

“Where is your faith?”

I think it’s another way of asking, “What are you afraid of?”

We are headed to the regions of the Gerasenes tomorrow where we will witness what it looks like when the chaos that swept over the sea moves into a human being. It’s ugly. Find your faith, and bring your A game.

© Seedbed 2021
Who Needs the Weather Channel When You've Got Jesus?
MORE STORIES