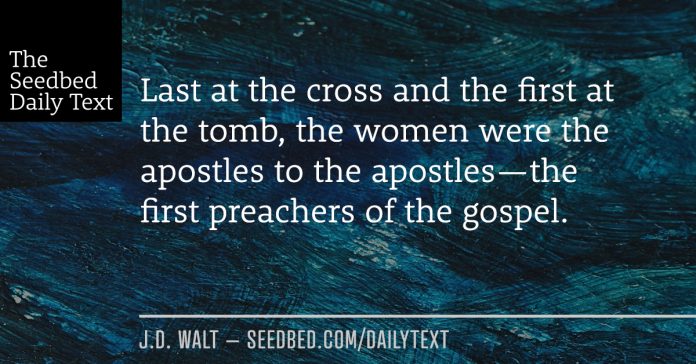 Then Moses and the people of Israel sang this song to the Lord, saying,

“I will sing to the Lord, for he has triumphed gloriously;
the horse and his rider he has thrown into the sea.
2 The Lord is my strength and my song,
and he has become my salvation;
this is my God, and I will praise him,
my father’s God, and I will exalt him.
3 The Lord is a man of war;
the Lord is his name.
4 “Pharaoh’s chariots and his host he cast into the sea,
and his chosen officers were sunk in the Red Sea.
5 The floods covered them;
they went down into the depths like a stone.
6 Your right hand, O Lord, glorious in power,
your right hand, O Lord, shatters the enemy.
7 In the greatness of your majesty you overthrow your adversaries;
you send out your fury; it consumes them like stubble.
8 At the blast of your nostrils the waters piled up;
the floods stood up in a heap;
the deeps congealed in the heart of the sea.
9 The enemy said, ‘I will pursue, I will overtake,
I will divide the spoil, my desire shall have its fill of them.
I will draw my sword; my hand shall destroy them.’
10 You blew with your wind; the sea covered them;
they sank like lead in the mighty waters.
11 “Who is like you, O Lord, among the gods?
Who is like you, majestic in holiness,
awesome in glorious deeds, doing wonders?
12 You stretched out your right hand;
the earth swallowed them.
13 “You have led in your steadfast love the people whom you have redeemed;
you have guided them by your strength to your holy abode.
14 The peoples have heard; they tremble;
pangs have seized the inhabitants of Philistia.
15 Now are the chiefs of Edom dismayed;
trembling seizes the leaders of Moab;
all the inhabitants of Canaan have melted away.
16 Terror and dread fall upon them;
because of the greatness of your arm, they are still as a stone,
till your people, O Lord, pass by,
till the people pass by whom you have purchased.
17 You will bring them in and plant them on your own mountain,
the place, O Lord, which you have made for your abode,
the sanctuary, O Lord, which your hands have established.
18 The Lord will reign forever and ever.”

I served for eleven years in a very obscure yet highly coveted post of ministry. I was the Dean of the Chapel at Asbury Theological Seminary. In a tiny town (aka Wilmore) in the heart of rural Kentucky I pastored a thousand or so seminary students (aka pastors) for eleven gloriously challenging years. In those years we gathered for worship over a thousand times. One of those gatherings stands in a category all its own. For many of those years we hosted a gathering known to the history of the the worship of the Church as “The Easter Vigil.”

The Easter Vigil always begins at dark on Holy Saturday. It starts outside of the sanctuary with a fire known as “The New Fire.” Once everyone is assembled around this fire, a very tall “torch” of a candle is lit symbolizing the “Pillar of Fire” by which God led the Israelites in their deliverance from Egypt. Everyone follows the Pillar of Fire into the Sanctuary and the festivities begin. The Easter Vigil is the Super Bowl of worship; a roof raising journey through twelve readings of Scripture. At the heart of this greatest highlight reel of all time is the parting of the Red Sea followed by the the most epic end zone dance in the history of the world. We know it as Miriam’s song and it is today’s text: Exodus 15.

Why is it called Miriam’s song? You had to ask.

Then Miriam the prophetess, the sister of Aaron, took a tambourine in her hand, and all the women went out after her with tambourines and dancing. 21 And Miriam sang to them:

Let’s just say at this point, our Easter Vigil got completely carried away. The birth pangs of resurrection kicked into full gear, leading our labor of liturgical love onward until the stroke of midnight when we shook off the shroud of death and rose up into the resurrection; as though it were happening for the very first time.

Easter is Miriam’s song times ten to the trillionth power.

Thank God for Miriam and the women of the Church, who never lost their nerve. As the twelve scattered to who knows where, the women remained. Last at the cross and the first at the tomb, the women were the apostles to the apostles—the first preachers of the gospel.

Today, on Holy Saturday, let us thank God for the women of the Church.

Father, I want to be a person who says such things. Thank you for the women of your Kingdom; the Mary’s and the Martha’s and the Miriam’s. Lord, I want to be in that number when the Saints go marching in. Today, I will sing to the Lord, for he has triumphed gloriously; the horse and his rider he has thrown into the sea. Come Holy Spirit, and train me to be such a person of faith. I pray in Jesus name, Amen.

Here’s your song of holy anticipation for Holy Saturday. Make up your own tune: “O death! O death! Where is your victory?! The horse and his rider he has thrown into the sea! x 100. (And I’ve already sent it to Chris Tomlin with the claim it will be the next “How Great is our God” chart-topping kingdom platinum hit!)

Pre-order your copy of People Who Say Such Things today. As you might imagine, our little team could use the encouragement and the funding. Coronavirus is crushing our budget (and we know yours too!). The book will commemorate forever this historic journey we’ve been on, make great gifts, and the cover is suitable for framing! ;0)