People Who Say Such Things: He Is Risen! - Seedbed
close
Menu 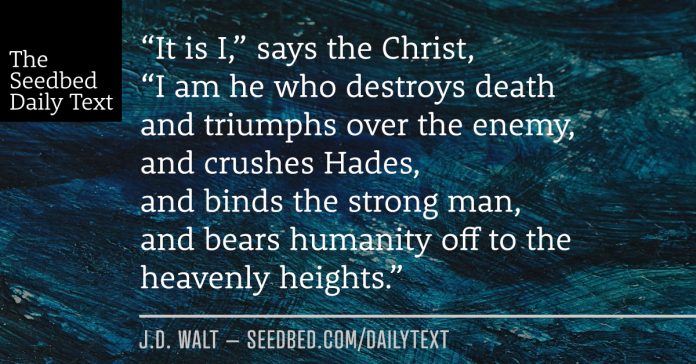 On the first day of the week, very early in the morning, the women took the spices they had prepared and went to the tomb. 2 They found the stone rolled away from the tomb, 3 but when they entered, they did not find the body of the Lord Jesus. 4 While they were wondering about this, suddenly two men in clothes that gleamed like lightning stood beside them. 5 In their fright the women bowed down with their faces to the ground, but the men said to them, “Why do you look for the living among the dead? 6 He is not here; he has risen! Remember how he told you, while he was still with you in Galilee: 7 ‘The Son of Man must be delivered over to the hands of sinners, be crucified and on the third day be raised again.’ ” 8 Then they remembered his words.

9 When they came back from the tomb, they told all these things to the Eleven and to all the others. 10 It was Mary Magdalene, Joanna, Mary the mother of James, and the others with them who told this to the apostles. 11 But they did not believe the women, because their words seemed to them like nonsense. 12 Peter, however, got up and ran to the tomb. Bending over, he saw the strips of linen lying by themselves, and he went away, wondering to himself what had happened.

Melito of Sardis, On Pascha (excerpts)

This is my all-time favorite sermon of all time. It happens to be the earliest sermon we have in recorded history outside of the Bible. It was proclaimed by Melito of Sardis, the Bishop of Sardis, who was a prominent leader in the second century church. He wrote this sermon around the year 167. It is the equivalent of the most spectacular theological fireworks show ever. And now, without further adieu, I present to you. . . .

He is the one led like a lamb
and slaughtered like a sheep;
he ransomed us from the worship of the world
as from the land of Egypt,
and he set us free from the slavery of the devil
as from the hand of Pharaoh,
and sealed our souls with his own spirit,
and the members of our body with his blood.

This is the one made flesh in a virgin
who was hanged on a tree,
who was buried in the earth,
who was raised from the dead,
who was exalted to the heights of heaven.

O mystifying murder! O mystifying injustice!
The master is obscured by his body exposed,
and is not held worthy of a veil to shield him from view.
For this reason the great lights turned away,
and the day was turned to darkness;
to hid the one denuded on the tree,
obscuring not the body of the Lord but human eyes.

“Who takes issue with me? Let him stand before me.
I set free the condemned.
I gave life to the dead.
I raise up the entombed.
Who will contradict me?

“It is I,” says the Christ,
“I am he who destroys death
and triumphs over the enemy,
and crushes Hades,
and binds the strong man,
and bears humanity off to the heavenly heights.”

He it is who made the heaven and the earth,
and formed humanity in the beginning,
who was proclaimed through the law and the prophets,
who took flesh from a virgin,
who was hung on a tree,
who was buried in earth,
who was raised from the dead,
and ascended to the heights of heaven,
who sits at the right hand of the Father,
who has the power to save all things,
through whom the Father acted from the beginning and forever.

Father, I want to be a person who says such things. He is Risen! And he is risen in me! Come Holy Spirit, and train me to be such a person of faith. I pray in Jesus name, Amen.

What are your takeaways from this People Who Say Such Things series?