People Who Say Such Things: Repent Rather Than Readjust - Seedbed
close
Menu 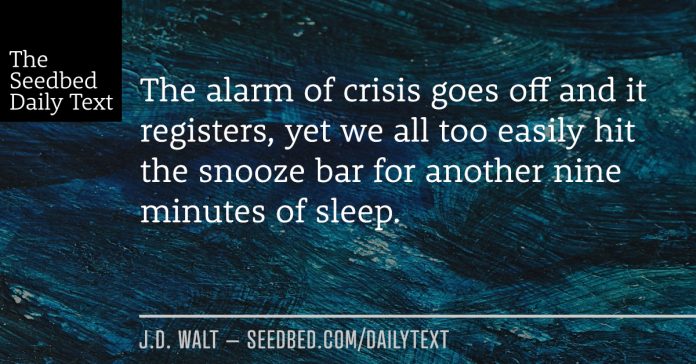 But when Pharaoh saw that there was relief, he hardened his heart and would not listen to Moses and Aaron, just as the Lord had said.

We come now to the dreaded plagues, and of all times to come, they choose to come now, in the midst of a global plague, I mean pandemic.

O.K., I don’t see COVID-19 as a plague sent by God to punish people or send a prophetic message or anything like that. COVID-19 is epidemiology 101. It is basic cause and effect. Germs spread and they cause disease. Still, people want to know if God sent this particular disease, or rather allowed it, in order to send some kind of message. Unless maybe the message is wash your hands more, I don’t see it that way. Does God send the flu every year in order to make a point? Surely not.

It is another question to ask what God might be up to in the midst of such a global crisis. It comes back to something I have said before here on the Daily Text. “Everything that happens is not God’s will, but God has a will in everything that happens.” Here are some ways we might “inquire of the Lord” with respect to COVID-19: “Father, what might you be up to in the midst of this global crisis? What might you be saying to your people (a.k.a. The Church) through these days of disruption? How might you be leading us to respond to our neighbors, especially those who may be far from you? How might you be awakening us from sleep in this moment in history? Lord Jesus, how might we sow with you for awakening in the days ahead?

As I ponder these ten plagues, which track out between chapters seven and eleven, there’s an observation I would like to test with you. I observe a behavioral phenomenon with Pharaoh’s response to the plagues I believe illuminates a broken pattern in human nature in the midst of a crisis situation. Here’s the pattern. Plague comes. Pharaoh agrees to relent and release the Israelites. Plague stops. Pharaoh reverts back to his former recalcitrance. Rinse and Repeat.

Here is an example of what I reference:

Then Pharaoh summoned Moses and Aaron. “This time I have sinned,” he said to them. “The Lord is in the right, and I and my people are in the wrong. 28 Pray to the Lord, for we have had enough thunder and hail. I will let you go; you don’t have to stay any longer.” Exodus 9:27-28.

Watch what happens next:

34 When Pharaoh saw that the rain and hail and thunder had stopped, he sinned again: He and his officials hardened their hearts. Exodus 9:34.

It’s tempting to characterize Pharaoh’s response as a change of heart. It even appears to be confession and repentance. Once the plague relents, though, he reverts back to his former posture. He has not changed at all. He merely responded to a crisis in what seemed to him as an expedient solution.

When they go back to their old normal, it creates a new normal for everyone else. Because of my refusal to change, other people are forced to adjust to the conditions created by my hard heart. Note how costly Pharaoh’s hard-heartedness proves for the people of Egypt. It will result in enormous losses, the chief of which will be the death of the first born son in every single household.

This present plague of a pandemic will pass. From horrific terror strikes to mass shootings, they always do. The question is will we change and seamlessly shift into the new normal or will we attune our lives to the ways God may be calling us to repent and realign with his kingdom going forward?

I guess the question I am asking has to do with awakening. Sometimes we confuse waking up with hitting the snooze bar. The alarm of crisis goes off and it registers, yet we all too easily hit the snooze bar for another 9 minutes of sleep. We sort of woke up but not really. I’m afraid that’s how it is with these situations like we find ourselves in now. The alarm can be deafening and yet we somehow find a way to hit snooze until the next one. So what if the matter of hard-heartedness is not as simple as comparing oneself to the obvious example of an ancient abusive Pharaoh? What if the more subtle symptom of hard-heartedness is waking up just enough to push the snooze bar and then back to the slumber of the old normal?

We’ve been through this enough now to know it is likely to happen again. How many new normals must we adjust to before saying, “Enough”? If we don’t do something different this time we will slowly adjust to the new normal, stocking our homes with the right kind of protective masks along with a six month supply of toilet paper. The sports and entertainment engines will kick back into high gear. We will sing our favorite songs a bit louder at church. The stock market will rise again. We will salute our health care professionals and drift back into our bad habits. I’m not being cynical—just honest. We’ve seen it happen too many times now to think anything will change unless we actually change in a sustained way.

So what can be different this time going forward? I have an idea. It involves a much deeper bonded attachment in the Holy Spirit between ordinary Christians. If you want to hear about it, you are going to have to let me know here. I’ll be in touch. (About a thousand of you already responded to this last week so no need to do it again).

We need a great awakening. Neither the old normal nor the new normal will bring us any closer. It is going to take making New Room in our lives for a few more people.

Father, I want to be a person who says such things. I confess I have been a part of the problem in the ways I have allowed myself to adjust to too many new normals. I want to say enough, yet I don’t want to shout it at the world in anger but to say it to myself. I know I must change and yet I know my will to change is not enough. It will take making some new room in my life, different than I know now. Come Holy Spirit, and train me be such a person of faith. I pray in Jesus name, Amen.

Are you seeing and sensing what I am sensing about such moments as these? Are you open to exploring the hardness of your own heart? Isn’t that what the ever progressing new normals do to us—harden our hearts?

Remember a few weeks back when we walked through Psalm 23 together? I have reworked those six readings in light of our present moment. I call it In The Valley of the Shadow of COVID-19. Sharing it would be a great way for you to encourage family and friends in your world. Click here to see it and share from there.