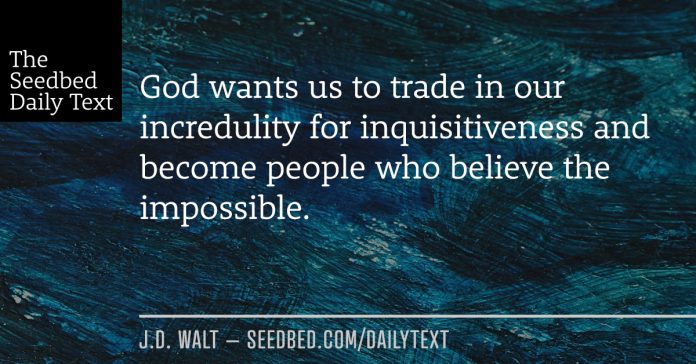 That’s the word. Incredulity. It’s that moment when something incredible actually falls off the cliff and becomes incred-uble. To be fair, the word incredible actually means impossible to believe. And increduble, though it’s a rogue word, strikes me as the perfect word. It describes the collision of something incredible and something dubious. In television parlance, they call this, “jumping the shark.” A television show jumps the shark when the plot turns in such a ridiculously absurd way most sensible viewers abandon ship. It becomes incredulous—like the one when God told one hundred year old Abraham that he and his 99 year old wife would have a baby.

God also said to Abraham, “As for Sarai your wife, you are no longer to call her Sarai; her name will be Sarah. 16 I will bless her and will surely give you a son by her. I will bless her so that she will be the mother of nations; kings of peoples will come from her.” Genesis 17:15-16

Abraham literally fell out of his chair laughing. Don’t believe me?

People who say such things demonstrate a willingness to move from incredulity to inquiry. They fall out laughing at the ridiculous notion yet they dare to crack the door, to entertain it by asking themselves the question, “Will a son be born to a man a hundred years old? Will Sarah bear a child at the age of ninety?”

I preached recently at a series of meetings. In one of the messages I spoke on the passage in Acts 3 where Peter and John famously heal the beggar who was “lame from birth.” You remember the one where Peter said, “Silver or gold I do not have, but what I do have I give you. In the name of Jesus Christ of Nazareth, walk.” (Acts 3:6) I remarked at how incredible it would be to be to do such a thing. After the message an older woman approached me with a word. She said, “You will be part of miraculous work like that.” I laughed. I found it incredulous. Weeks later, I still mull this over, asking myself, “Will I command the lame to walk in Jesus name?” To ask the question is to risk the answer. I am moving from incredulity to inquisitive.

It’s OK to believe the miraculous is too incredible to be possible—for a minute. It’s OK to find the possibilities of God incredulous and inaccessible to yourself— for a while. The one thing you can’t do is to dismiss them. OK, you can dismiss them, but you may not be following New Testament Jesus. (There are many other versions of Jesus, you know)

There are some people out there whose doctrinal belief system separates the Bible from now; as in, that was then but this is now. There are plenty of people whose faith (and heart) has been broken by God’s apparent failure to come through for them. Whether your incredulity at the laughable possibilities of God (even in your own life) comes from a place of your doctrine or your brokenness or even your indifference matters not.

The question is—will you crack the door of your mind and heart to the question? Will you risk the disruption to your doctrine, the pain of yet more disappointment, or the interruption of your indifference? You may laugh it off, but will you trade in your incredulity for inquisitiveness and become a person who says such things?

Father, I want to be a person who says such things. When it comes to my faith in you, I want to count the cost yet I want to be an uncalculated risk taker. I would rather err on the side of leaning into your possibilities, even the far fetched and miraculous ones, than to play it safe on the sidelines. Where are you inviting me to ask myself about the challenging thing you may be saying to me? Right now, so much of it seems incredulous. Open my heart to inquisitiveness, to ask the question, to risk the disappointment of faith, even the disruption of my well laid plans for my well planned life. Come Holy Spirit, and train me be one of these kind of people. I pray in Jesus name, Amen.

So what might be the incredulous possibility the Spirit is identifying in your life? Doesn’t need to be miraculous or even grand– just a place where you are disinclined to believe. What might the question look like for you today?

P.S. O.K. Sowers, only a few more days of the SOWERS SPECIAL on the First Word—Last Word—God’s Word book. Purchase 5 copies and get them and as many more as you like at 50% off. Sharing a copy with a colleague, friend or family member is a perfect way to invite them into our Daily Text Community. I will include such an invitation in the book—as well as an explicit invitation to follow Jesus.