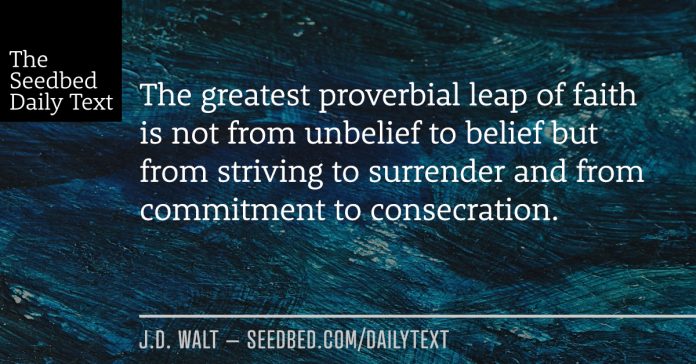 All these people were still living by faith when they died. They did not receive the things promised; they only saw them and welcomed them from a distance, admitting that they were foreigners and strangers on earth. 14 People who say such things show that they are looking for a country of their own. 15 If they had been thinking of the country they had left, they would have had opportunity to return. 16 Instead, they were longing for a better country—a heavenly one.Therefore God is not ashamed to be called their God, for he has prepared a city for them.

O.K., Sowers, friendly reminder: Take a few minutes now and read Hebrews 11—the entire chapter, aloud. As you read, I’ll be running up an interpretive banner up the flagpole of our collective souls with these words: “Earnestly Seeking Him.” And as you do this, know it is an act of worship in and of itself to read the Holy Word of God aloud. These are the very words that remake the World and they never return to him void.

You will remember from yesterday’s reading this word from Hebrews 11:6 about God rewarding those who earnestly seek Him. Let’s spend another minute on this concept. It is important to understand that earnestly seeking God does not mean revving up the engines on what you are already doing. It can’t be reduced to getting up an hour earlier, reading a chapter longer, praying a bit bolder and otherwise trying to do more to be a better and more devoted Christian. Let’s call this the struggle of striving.

Earnestly seeking him is something altogether different. It requires a different mentality and mindset. We must shift from the ascent mode of striving for God into the descent mentality of abandonment to God. Faith does not require striving. It invites outright surrender.

Some weeks ago I was with my close friend and constant encourager, Brian. We were talking about eating healthy when the conversation turned to sugar. He said something to me that lodged a splinter in my soul. He said, “John David, 99% is Hell. 100% is Heaven. Your big problem with sugar is you bounce around with your food choices between 1% and 99% but you have never gone to 100%. Once you go 100% in you will be done with sugar and there are no more choices.”

Let’s just say the dominoes in my soul began to fall. 1% to 99% is the continuum of striving; the country called, “commitment.” 100% is the zone of surrender; the country called, “consecration.” Like a New Year’s resolution, striving and commitment are seductive, all at once requiring enormous effort on our part while keeping us 100% in control. It’s why they seldom survive January. We never left the old country. We just doubled down our efforts on trying to find a better way in an old place. Surrender and consecration take us out of the old country. They don’t show us a “better way” but a “better country.” We are no longer in control at all but we have ceded our control to a sovereign beyond our selves. We now belong to Jesus, which brings meaning to the originating Creed of our faith: Jesus is Lord!

The greatest proverbial “leap of faith” is not from unbelief to belief but from striving to surrender and from commitment to consecration. It is to move from the continuum of 1% to 99% to the country of 100%. It is not about revving up our commitment but giving up our control. Now here’s the interesting part. We don’t actually leave anywhere or anyone behind. Though we are still surrounded by the “old country” we begin to see the New Creation springing up everywhere, both from a distance and yet gloriously up close. We discover life not according to a better way but by a new way entirely. We become citizens of Heaven with an earthly address, doing things we never imagined possible with people we thought were too good to be true.

There’s so much to be said here but I’ve got to land the plane for today. Now read today’s passage in light of these ponderings and see what you see.

All these people were still living by faith when they died. They did not receive the things promised; they only saw them and welcomed them from a distance, admitting that they were foreigners and strangers on earth. 14 People who say such things show that they are looking for a country of their own. 15 If they had been thinking of the country they had left, they would have had opportunity to return. 16 Instead, they were longing for a better country—a heavenly one.Therefore God is not ashamed to be called their God, for he has prepared a city for them.

Our Father in Heaven, here I am a citizen of your Kingdom living in the midst of the kingdoms of this world. Awaken me to the glorious possibilities of this life of faith. Lead me out of the slavery of my own committed-ness and into the new land of consecrated-ness. I want to be done with my striving so that I might lay down my life in trusting surrender to you. Come Holy Spirit and show me this new way of earnestly seeking after you. We pray in the name of our Lord and King, Jesus Christ, the pioneer and perfecter of our faith.  Amen.

P.S. Pre-order your copy of Casey Culbreth’s Advent Series, God is Here from our store here.