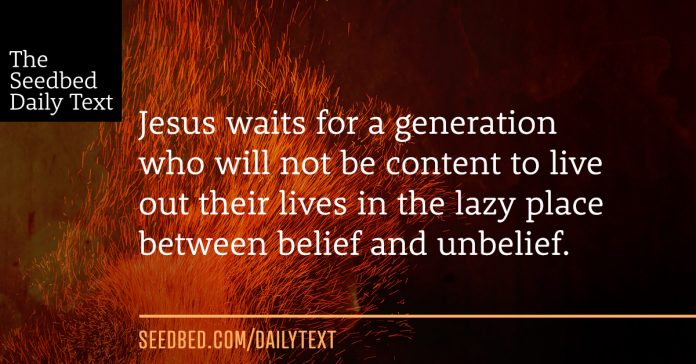 21 Jesus asked the boy’s father, “How long has he been like this?”

“From childhood,” he answered. 22 “It has often thrown him into fire or water to kill him. But if you can do anything, take pity on us and help us.”

23 “‘If you can’?” said Jesus. “Everything is possible for one who believes.”

24 Immediately the boy’s father exclaimed, “I do believe; help me overcome my unbelief!”

25 When Jesus saw that a crowd was running to the scene, he rebuked the impure spirit. “You deaf and mute spirit,” he said, “I command you, come out of him and never enter him again.”

26 The spirit shrieked, convulsed him violently and came out. The boy looked so much like a corpse that many said, “He’s dead.” 27 But Jesus took him by the hand and lifted him to his feet, and he stood up.

28 After Jesus had gone indoors, his disciples asked him privately, “Why couldn’t we drive it out?”

29 He replied, “This kind can come out only by prayer.”

The question reveals the nature of God who cares deeply about human brokenness. It’s not something he needed to know in order to heal the boy. He wanted to know because he cared.

But if you can do anything, take pity on us and help us.”

We know the man had faith because he brought his son to Jesus’ disciples for help. As we discussed earlier, they failed in their efforts. It’s perhaps an obvious observation, but definitely worth noting here that because of the failure of Jesus’ disciples, the man had lost faith in Jesus. Of all the things one might say to Jesus, it’s hard to imagine speaking these three words: “If you can.”

Jesus seems to be growing weary of the lack of faith he finds among the race of men. Remember his lament from yesterday?

This would not be a good thing to hear from the Son of God. I suspect, though, he might say a similar thing to our generation. Sadly, it probably characterizes most generations. The last thing I want to hear Jesus say about me would be this one word, “unbelieving.” The good news is the gospel word Jesus speaks into every person of every generation:

“Everything is possible for one who believes.”

I came across this excellent definition of faith by a New Testament commentator. “Faith is the assertion of a possibility against all probabilities, in spite of any contrary indication provided by our experience of life or the realities of the world, and in constant battle against temptation.” (W. Grundmann)

The father responds with one of the most classic lines in the New Testament.

Immediately the boy’s father exclaimed, “I do believe; help me overcome my unbelief!”

With this prayer, the Father gave us the gift of piercing honesty, and if we are honest, we know exactly what he meant. We are all a messy mixture of belief and unbelief; of faith and doubt. It’s all too easy to simply norm this reality and resign ourselves to it. After all, we’re human, right? And Jesus was human. Jesus waits for a generation who will not be content to live out their lives in the lazy place between belief and unbelief. Sure, it’s an unreasonable expectation given the immensity of impossibility constantly surrounding us. Still, he longs to see it in us.

Well, we know what happened next. Jesus cast out the evil spirit and if that weren’t enough, he raises the boy from the dead immediately following. We need scenes like this emblazoned on our imagination. In fact, this is one of the reasons for reading the Gospels over and over and over again; so these stories will become fused with our memory.

My keen interest, however, is in the exchange between Jesus and his disciples later that day.

After Jesus had gone indoors, his disciples asked him privately, “Why couldn’t we drive it out?”

He replied, “This kind can come out only by prayer.”

So did the disciples forget to pray before they tried casting out the evil spirit? I don’t think so. I’m sure they prayed. They probably prayed in Jesus name. I think the problem is the disciples lived in the same place as the boy’s father—somewhere between belief and unbelief. I don’t think Jesus was talking about prayer as a practice or technique here. I think he meant something much larger than a simple act of speaking to God on behalf of people in need. In my humble opinion, when Jesus references prayer here he’s talking about a totalizing way of life; a way of living in the kind of faith that excludes unbelief. It reminds me of something Henri Nouwen wrote years ago that I’ve never forgotten. I’ll close with it today.

“The word ‘prayer’ stands for a radical interruption of the vicious chain of interlocking dependencies leading to violence and war and for an entering into a totally new dwelling place.  It points to a new way of speaking, a new way of breathing, a new way of being together, a new way of knowing, yes, a whole new way of living. . . Prayer is the center of the Christian life.  It is the only necessary thing. (Luke 10:42) ”  Henri Nouwen “Prayer and Peacemaking”

Spirit of the Living God, fall afresh on me. Lord Jesus, I believe. Help my unbelief. Yes, help me be honest about my unbelief for until I have named it I will never get beyond it. Lead me to this “totally new dwelling place” with you, where to live is to believe and to believe is to pray. Melt me. Mold me. Fill me. Use me. For the glory of your name, Jesus. Amen.

What will it take for you to become brutally honest about your “unbelief?” What is underneath this unbelief for you?