Why You Really Don't Own Anything - Seedbed
close
Menu 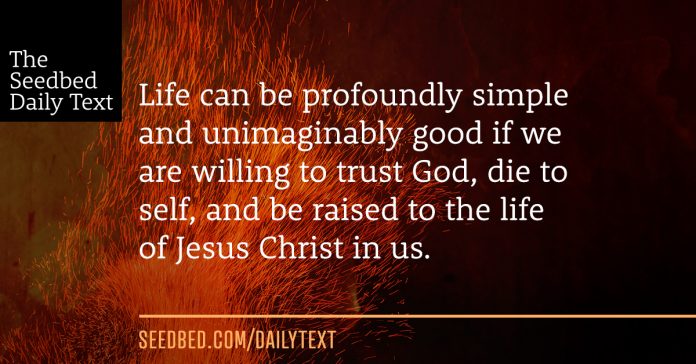 Jesus then began to speak to them in parables: “A man planted a vineyard. He put a wall around it, dug a pit for the winepress and built a watchtower. Then he rented the vineyard to some farmers and moved to another place. 2 At harvest time he sent a servant to the tenants to collect from them some of the fruit of the vineyard. 3 But they seized him, beat him and sent him away empty-handed. 4 Then he sent another servant to them; they struck this man on the head and treated him shamefully. 5 He sent still another, and that one they killed. He sent many others; some of them they beat, others they killed.

6 “He had one left to send, a son, whom he loved. He sent him last of all, saying, ‘They will respect my son.’

7 “But the tenants said to one another, ‘This is the heir. Come, let’s kill him, and the inheritance will be ours.’ 8 So they took him and killed him, and threw him out of the vineyard.

9 “What then will the owner of the vineyard do? He will come and kill those tenants and give the vineyard to others. 10 Haven’t you read this passage of Scripture:

“‘The stone the builders rejected
has become the cornerstone;
11 the Lord has done this,
and it is marvelous in our eyes’?”

12 Then the chief priests, the teachers of the law and the elders looked for a way to arrest him because they knew he had spoken the parable against them. But they were afraid of the crowd; so they left him and went away.

When you are a landowner and you rent your land to be farmed by tenant-farmers you enter into a very ancient, quite common yet highly nuanced relationship. I understand this because I come from a long line of farmers. Our family has been on both sides of the equation—as the tenant farmers on some occasions and as the land owner on others. Allow me to raise a few of the fundamental yet sophisticated assumptions:

1. The landowner expects the tenant-farmer to farm the land as though it were his/her* own.

2. The landowner expects the tenant-farmer to remember this land is not his own but that he must maintain the highest standards of accountability to the landowner.

Permit me a sidebar comment that potentially cracks the nut of the whole parable. This is the way God expects us to think of our own lives and everything we have. I am not my own. I belong to God. God entrusts me with all that I am and all that I have. I own nothing yet I am responsible to steward it all with the same fidelity and fruitfulness as though I owned it all. God expects a fruitful return from my life—for my gain, the good of my neighbors and to the end bringing God glory. This is the life of discipleship and the way of the Cross. Life can be profoundly simple and unimaginably good if I am willing to trust God, die to myself and my self interest and be raised to the Life of Jesus Christ in me by the power of the Holy Spirit. It can be insanely complicated and unutterably conflicted if I drift from the fundamental assumptions of this relationship, forgetting who is who and whose is what.

In truth, we will flourish as the followers of Jesus and thrive in the kind of life we were made for to the extent we live into this reality. To the extent we do not live from these core assumptions on which everything else is built we will become arrested in our development and fail to become the people God imagined when he made us. We will come to the end of our days only to realize we have wasted our life. The beautiful thing? It’s never too late to get this right. The even more beautiful thing about getting it right? God will work retroactively to take the broken ways we have lived and bring blessing from them for others’ sake.

When Jesus told the Jewish leaders this story, they knew exactly where he was going with this, and it infuriated them. Why? They knew the deplorable track record of their leaders down through history. They thought they were different; that they could somehow get it right in God’s name without doing it according to God’s will and ways. Despite all of their highly visible devotion to God, their lives were devoid of his presence. Despite the ornate beauty and grandeur of the Temple, in a manner of speaking, God had left the building a long time ago.

In point of fact, in their minds, the landowner was dead.

“But the tenants said to one another, ‘This is the heir. Come, let’s kill him, and the inheritance will be ours.’  So they took him and killed him, and threw him out of the vineyard.

Anyone knows if the landowner was still alive, killing his heir would not mean anything. It would still belong to the landowner. Clearly, they thought the landowner was dead. In consequence of their assumption, if they could kill the heir, the land would be theirs. It’s something akin to the legal doctrine known as “Adverse Possession.”

All of this brings us back to the three strategies noted earlier: Reform, revolution and resurrection. The “reforms” of the religious leaders actually turned out to be their own revolt or revolution against God. Jesus introduced the new strategy which had been there all along: Death and Resurrection.

“‘The stone the builders rejected
has become the cornerstone;
11 the Lord has done this,
and it is marvelous in our eyes’?”

A couple of questions: 1. Are you living the profoundly simple, unimaginably good life of a tenant-farmer in God’s Kingdom? 2. Or are you stuck in the insanely complicated, unutterably conflicted life of a would-be owner? Think about this with respect to the stewardship of your physical body. Think about it with respect to money. While money is not the whole tamale, it is a very effective barometer. Does your giving amount to a weak tip (a.k.a. 10%) while managing your reserves as though that were your part? And to be clear– raising that to a decent tip (a.k.a. 20%) is not the answer.

This is about coming to the place in your deepest heart and mind where you truly understand and live as though you owned nothing and stewarded everything—for the good of others and the glory of God.  I think this is why Jesus said it is very hard for a rich person to enter the Kingdom of God. This is what he means. It’s not about selling everything you have and giving the money to the poor (unless it needs to be). This is all about abandoning ourselves to the One who loves us the most. It sounds impossible at first, and in fact, it is only possible with God.

Spirit of the Living God, fall afresh on me. Lord Jesus, I confess I think I am the owner of what I have rather than the steward. Awaken me to the truth and save me from the illusion. Melt me. Mold me. Fill me. Use me. For the glory of your name, Jesus. Amen.

What will it take to come to the understanding— to truly grasp— that you are not the owner of what you have but the steward?