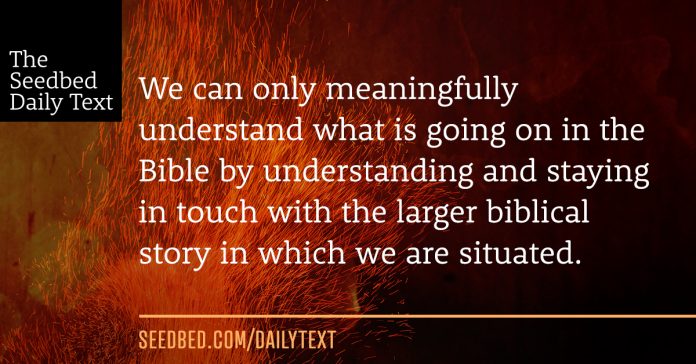 53 When they had crossed over, they landed at Gennesaret and anchored there. 54 As soon as they got out of the boat, people recognized Jesus. 55 They ran throughout that whole region and carried the sick on mats to wherever they heard he was. 56 And wherever he went—into villages, towns or countryside—they placed the sick in the marketplaces. They begged him to let them touch even the edge of his cloak, and all who touched it were healed.

96. Let’s begin by relocating ourselves in the text with a kind of biblical GPS approach. It’s something we need to do often. Life moves so steadily past us that we often find ourselves going from one thing to the next and losing touch with what life is about in the first place. I’m convinced this is part of the reason God commanded us to keep Sabbath, but that’s another post.

In the warp and woof of daily Scripture reading, it’s all to easy to keep up with what page we’re on yet lose touch with what Story we’re in. What if I sent you a google map that showed you my location within about a one mile radius; would you know where I was? Well, yes and no. We can only know where we are in a meaningful sense by knowing the larger geographical context in which we are situated. You would need to zoom out a few clicks to see the town, county, state, and so forth. As an interesting aside, we can only know who we are by knowing the larger relational context in which we are associated; but that’s another post.

I know, I promised a shorter entry today. We can only meaningfully understand what is going on in the Bible by understanding and staying in touch with the larger biblical story in which we are situated. We are in the first Gospel, which began by locating us in the wilderness with John the Baptist where we quickly met John who baptized Jesus. At this baptism, we had the privilege of witnessing the Holy Spirit descend from Heaven with the voice of the Father saying, “You are my son, whom I love; with you I am well pleased.” In the next scene the demons are calling him “The Holy One of God.” Beyond that, no one gets who he is. Some call him Teacher. Others know him as a healer. His family thinks he’s out of his mind. The Pharisees actually call him Satan. In yesterday’s text he served as something of a first century food truck. And his disciples, the closest ultimate insiders—they aren’t getting it either. And his hometown people can’t see past him being the son of his parents.

97. Mark’s Gospel has us on a journey of discovery. Who recognizes who Jesus really is and who does not? So we come to today’s text where we get this:

As soon as they got out of the boat, people recognized Jesus.

No they didn’t. They recognized the man who had miraculous powers to heal, who could raise the dead, who commanded the demons, who had authority unlike the teachers of the law, but they did not recognize him as the Son of God. Had they recognized him as the God of the universe, they would have hit the deck, bowing as low as they possibly could in an act of humble adoration. You know what they did instead? The text is clear:

They recognized him for what he could do, not for who he was, and they ran. Sure, it was awesome that they ran throughout the countryside finding people in need and carrying them to Jesus to heal. That’s a measure of faith to be sure. But what would it look like for faith to be placed in who he is, beyond just in what he could do?

Spirit of the Living God, fall afresh on me. Lord Jesus, I fear I am still stuck in only seeing you for what you can do. I wonder, too, if I am stuck in seeing myself that way; and worse other people. I want to see you and know you and love you simply for who you are. Open the eyes of my heart to behold you this way. Melt me. Mold me. Fill me. Use me. For the glory of your name, Jesus, Amen.

How would you describe who Jesus is to you beyond his mercies and gifts and blessings upon you? Give it a shot.