Some Reflections on the Original Happy Meal - Seedbed
close
Menu 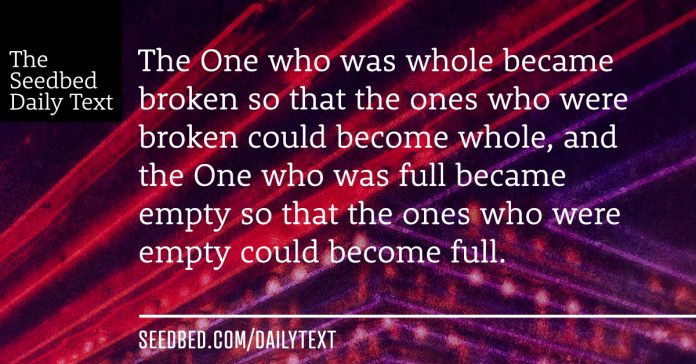 So then, whoever eats the bread or drinks the cup of the Lord in an unworthy manner will be guilty of sinning against the body and blood of the Lord. Everyone ought to examine themselves before they eat of the bread and drink from the cup. For those who eat and drink without discerning the body of Christ eat and drink judgment on themselves.That is why many among you are weak and sick, and a number of you have fallen asleep. But if we were more discerning with regard to ourselves, we would not come under such judgment. Nevertheless, when we are judged in this way by the Lord, we are being disciplined so that we will not be finally condemned with the world.

So then, my brothers and sisters, when you gather to eat, you should all eat together. Anyone who is hungry should eat something at home, so that when you meet together it may not result in judgment.

And when I come I will give further directions.

Winding our way through this labyrinthine Corinthian culture can itself be disorienting with all its food sacrificed to idols and pagan temples and head coverings and “eschatological women.” It’s time to rise up above the treeline, get a little altitude, and look down upon ancient Corinth with a bit broader perspective.

In these closing lines of chapter 11 we are talking about the central act of the central act of the people of God. It has been called the Last Supper and the Lord’s Supper and the Eucharist and Holy Communion among other things. From that first celebration on the last night through the earliest days of the church down all the twisted corridors of history and to the present day, despite differences and divisions, the church has always celebrated the Lord’s Supper. While we need not diminish other acts and forms of worship nor those who might disagree, we would do well heed this word from Paul concerning the practice.*

Everyone ought to examine themselves before they eat of the bread and drink from the cup.

So why does the Lord’s Supper matter and mean so much? It is simultaneously a celebration of personal relationship with God and community fellowship with the church of all ages at all times and in all places. It involves the core act of human survival: eating and drinking. In the same way, the supper celebrates the reality of greatest necessity required for human flourishing: communion with the Father, Son, and Holy Spirit. The Last Supper engages our five senses of sight, sound, smell, taste, and touch while at the same time involving the intangible perceptions of the soul and spirit. The experience of the Lord’s Supper is a profound expression of the kingdom of God: both concrete and mystical; physical and spiritual; seen and unseen; human and divine; indeed on earth as it is in heaven. The Lord’s Supper demonstrates the wholistic “one loaf,” “one cup,” and “one body” unity of a global communion of profound diversity. In partaking of the meal one must be served by another; it is an act of giving and receiving. Self-service is an oxymoron when it comes to the worship of God. Bread and wine involve fruits of the miraculous creation of God: grains of wheat and grapes from the vine. The preparation of bread and wine involve the creatively industrious work of divinely fashioned human hands. In the Eucharist, we celebrate the infinite abundance of the presence of God in what is apparently the smallest of portions of provision.

The Lord’s Supper is a most powerful yet humble means of the grace of God through the remembrance of Jesus Christ by the powerful presence of the Holy Spirit.

Glory be to the Father, and to the Son, and to the Holy Spirit. As it was in the beginning, is now and ever shall be; world without end, amen. Amen.

*I want to be respectful of the Salvation Army and Quakers who as a matter of conviction do not practice the sacraments of Baptism and the Lord’s Supper. They do not despise the practice and they honor the convictions of others, but for their own reasons do not observe them in their worship practices.

Our Father in Heaven, hallowed be your name. Your Kingdom come. Your will be done, on Earth as it is in Heaven. You, Jesus, who were whole became broken, so that I who am broken can become whole. Thank you. You, Jesus, who were full, made yourself empty, so that I, who am empty, could become filled with all your fullness. Thank you. Come Holy Spirit and immerse me ever deeper in these deepest mysterious realities of on Earth as it is in Heaven. In Jesus’ name. Amen.

© Seedbed 2021
Some Reflections on the Original Happy Meal
MORE STORIES