Why We Say "Thank God It's Friday" - Seedbed
close
Menu 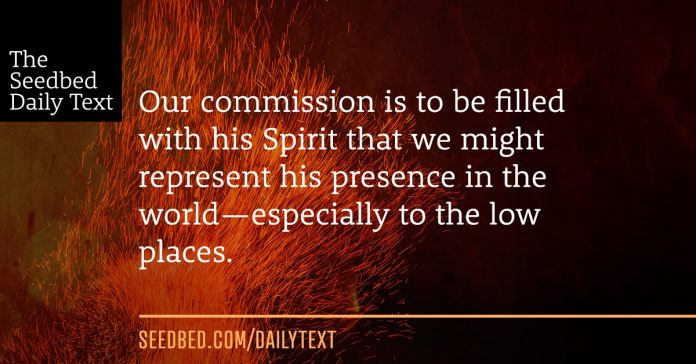 38 The curtain of the temple was torn in two from top to bottom. 39 And when the centurion, who stood there in front of Jesus, saw how he died, he said, “Surely this man was the Son of God!”

40 Some women were watching from a distance. Among them were Mary Magdalene, Mary the mother of James the younger and of Joseph, and Salome. 41 In Galilee these women had followed him and cared for his needs. Many other women who had come up with him to Jerusalem were also there.

It is hard to overestimate the magnitude of what happened on this particular Friday in world history.

On this particular Friday in world history there would be a catastrophic change.

The curtain of the temple was torn in two from top to bottom.

That the ripping came from top to bottom indicated no human being had done it. On a nearby hill outside the city, another sacrifice unfolded. Something cosmic and eternal was happening. I want you to read this passage from Hebrews very carefully.

But when Christ came as high priest of the good things that are now already here, he went through the greater and more perfect tabernacle that is not made with human hands, that is to say, is not a part of this creation. He did not enter by means of the blood of goats and calves; but he entered the Most Holy Place once for all by his own blood, thus obtaining eternal redemption. The blood of goats and bulls and the ashes of a heifer sprinkled on those who are ceremonially unclean sanctify them so that they are outwardly clean. How much more, then, will the blood of Christ, who through the eternal Spirit offered himself unblemished to God, cleanse our consciences from acts that lead to death, so that we may serve the living God! Hebrews 9:11-14.

The symbol of the Temple was being replaced with the sign of the cross. A most feared sign of unadulterated terror and death took the place of the most cherished symbol of the presence of God. Even more, this most feared sign of unfathomable cruelty and insufferable pain would become the most hallowed sign on Earth? How on Earth could this be possible? Because nothing is impossible with God. In fact, this is the message of the cross. Absolutely nothing is beyond the redemption of Jesus. Now read this additional text from Hebrews carefully.

Therefore, brothers and sisters, since we have confidence to enter the Most Holy Place by the blood of Jesus, by a new and living way opened for us through the curtain, that is, his body, and since we have a great priest over the house of God, let us draw near to God with a sincere heart and with the full assurance that faith brings, having our hearts sprinkled to cleanse us from a guilty conscience and having our bodies washed with pure water. Let us hold unswervingly to the hope we profess, for he who promised is faithful. Hebrews 10:19-25

His body is the new curtain. His blood is the new and living way. His priesthood is forever established. He doesn’t give us a set of rules and regulations by which to approach God. He is the Way Himself! It’s why before we were called Christians they called us, “People of the Way.” This way is alive and open and beckons us to “draw near!”

There’s more. You and I, as the followers of Jesus, are more than followers. We are ambassadors and priests. I think of us as the “Low Priests” in contrast with Jesus, the “High Priest.” Our commission is to be filled with his Spirit that we might represent his presence in the world—especially to the low places. Nothing, absolutely nothing, is beyond the scope and scale of his redemption.

And when the centurion, who stood there in front of Jesus, saw how he died, he said, “Surely this man was the Son of God!”

And the fact that a Roman Centurion, one of the executioners of Jesus, was the first to truly get it—takes it over the top. Confidence! Assurance! Hope! Wow! And all of this on a Friday. That’s why we say Thank God it’s Friday!

Though we can draw near any day at any time, what if Fridays could become a focused “Drawing Near Day?” Just thinking aloud. (That’s the way Methodists think, I guess).

Spirit of the Living God, fall afresh on me. Lord Jesus, the curtain was torn from top to bottom as your body was broken on the Cross. You have drawn so near to us. I will draw near to you. Right here, right now, I draw near to you. Melt me. Mold me. Fill me. Use me. For the glory of your name, Jesus. Amen.

What would it look like for the confidence, assurance, and hope of all of this to rise up within you? What keeps you from “drawing near to God?” Pray for this assurance. It is a gift of the Holy Spirit. He wants us to ask for it. It’s part of the process. This is real. The only thing holding us back is us.

BIG ANNOUNCEMENT COMING THIS WEEK. Hint: It involves a Daily Text Study for Local Churches–just in time for the 40 Days of Lent!