Sometimes It's Satan, Most of the Time It's the Wind - Seedbed
close
Menu 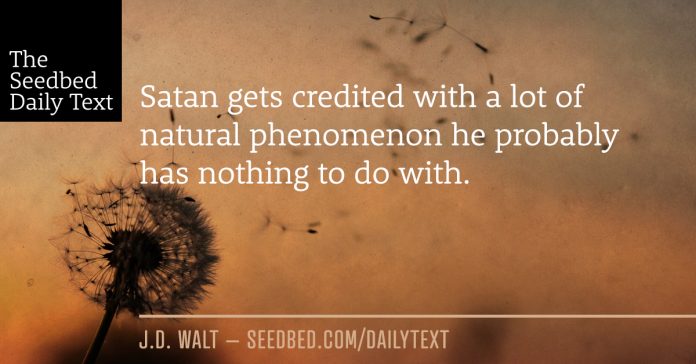 Much time had been lost, and sailing had already become dangerous because by now it was after the Day of Atonement. So Paul warned them, “Men, I can see that our voyage is going to be disastrous and bring great loss to ship and cargo, and to our own lives also.” But the centurion, instead of listening to what Paul said, followed the advice of the pilot and of the owner of the ship. Since the harbor was unsuitable to winter in, the majority decided that we should sail on, hoping to reach Phoenix and winter there. This was a harbor in Crete, facing both southwest and northwest.

Much time had been lost owing to the high winds and rough seas.

Let’s stop right there. While I don’t see it in today’s text, I hear it often in conversations these days. Satan gets credited with a lot of natural phenomenon he probably has nothing to do with. A thunderstorm rains on a church picnic. A youth group cancels their annual mission trip to the coast because of an impending hurricane. A tornado wipes out a local church and the neighborhood surrounding it (or spares the church while wiping out the homes). It’s so easy to push the “Satan” button when something out of our control, like the wind, blows our house down.

The truth? Sometimes Satan is involved. It’s important to recognize this. In the story of Job, Satan seems to be the author of the totalizing disasters. Most of the time, it’s probably just the wind. In the Acts story, more often than not, when the way gets blocked for the Apostles it’s the Holy Spirit closing the path.

Here’s how I understand it.

One more thing. Julius should have listened to Paul. Just saying.

Do you regularly push the Satan button or rarely? Why do you think that is?