Why You Should Start Writing Your Autobiography - Seedbed
close
Menu 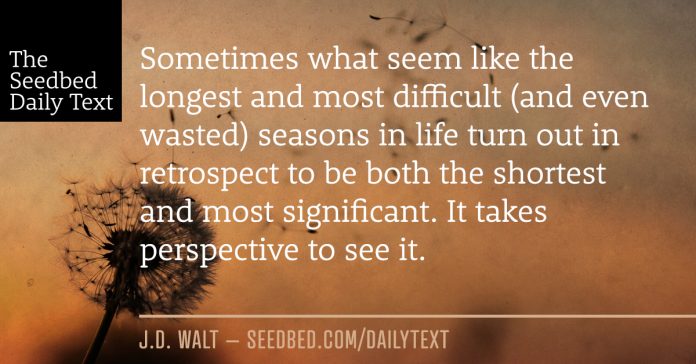 When it was decided that we would sail for Italy, Paul and some other prisoners were handed over to a centurion named Julius, who belonged to the Imperial Regiment. We boarded a ship from Adramyttium about to sail for ports along the coast of the province of Asia, and we put out to sea. Aristarchus, a Macedonian from Thessalonica, was with us.

If you’ve been with me for any length of time, you know by now I am master of the obvious insight. Here’s another one:

Chances are, your autobiography will never be written, unless you write it. And chances are you will never write it.

We’ve been tracking Paul for weeks now and the journey is coming to a close. Today, after more than two years, he finally sets sail for Rome.

As I turned the page into chapter 27, I found myself wanting to have a big picture view of Paul’s life. Sure, we get a two years here and three years there along the way from the text, but the Bible doesn’t offer us a nice and neat autobiographical timeline. I want to know how old Paul was when he held those coats at the stoning of Stephen? What was his age when he saw the blinding light on the Damascus Road? To track a person’s journey, accomplishments and achievements alongside their age always fascinates me. It’s fun to think about what Paul did by a certain age and compare it to all I hadn’t even come close to doing by that same age.

I thought it might be helpful to map it out in a simple way here. Note: scholars will debate timelines and dates until Jesus returns so I do not offer this as definitive. It’s a guideline to give us a sense of his life’s unfolding.

Life is short and yet life is long. Sometimes what seem like the longest and most difficult (and even wasted) seasons in life turn out in retrospect to be both the shortest and most significant. It takes perspective to see it.

So back to your autobiography you will probably never get around to writing. Here’s a helpful and somewhat easy step to take in that direction. Timeline your life. Pick the key moments, seasons, relationships and events. Write them linearly across a page and simply put your age next to each of them. Who mattered most in your life and when and why? Now write a sentence or two about where you see God at work across the spectrum of your life? Where was he whispering, shouting, singing, guiding, blessing, and so forth? After scrolling out the table of contents, take a stab at drafting a short paragraph or three for each chapter.

Why do this? It is a powerful exercise in remembrance and reflection, two things we are in short supply of these days. The quiet and often unseen work of the Holy Spirit often becomes visible and clear through this kind of practice. Your story matters. It really does, and it is not over. God has not wasted a day of your life. Get in touch with the scope and sweep of it all. Regardless, it will give much needed perspective and who knows, it could lead to some pretty significant decisions, maybe a course correction, or maybe just a long pause of gratitude.

I did this for the first time when I was 27. It profoundly impacted me and my future. A lot has happened since then. I’m going to do it again. Will you join me?

Will you consider taking a stab at starting to write your spiritual autobiography? If yes, then when? If not, why not?