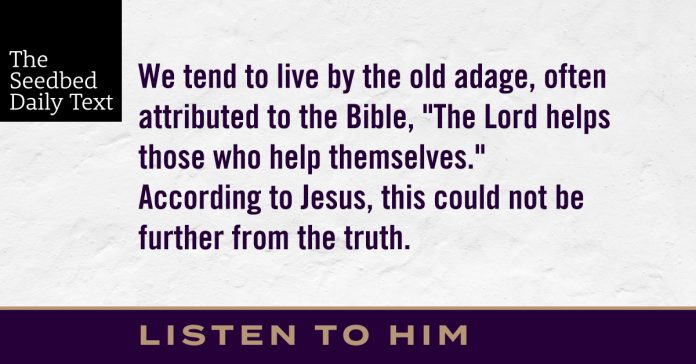 When he noticed how the guests picked the places of honor at the table, he told them this parable: “When someone invites you to a wedding feast, do not take the place of honor, for a person more distinguished than you may have been invited. If so, the host who invited both of you will come and say to you, ‘Give this person your seat.’ Then, humiliated, you will have to take the least important place.

Then Jesus said to his host, “When you give a luncheon or dinner, do not invite your friends, your brothers or sisters, your relatives, or your rich neighbors; if you do, they may invite you back and so you will be repaid. But when you give a banquet, invite the poor, the crippled, the lame, the blind, and you will be blessed. Although they cannot repay you, you will be repaid at the resurrection of the righteous.”When one of those at the table with him heard this, he said to Jesus, “Blessed is the one who will eat at the feast in the kingdom of God.”Jesus replied: “A certain man was preparing a great banquet and invited many guests. At the time of the banquet he sent his servant to tell those who had been invited, ‘Come, for everything is now ready.’“But they all alike began to make excuses. The first said, ‘I have just bought a field, and I must go and see it. Please excuse me.’

“Another said, ‘I have just bought five yoke of oxen, and I’m on my way to try them out. Please excuse me.’

“Still another said, ‘I just got married, so I can’t come.’

“The servant came back and reported this to his master. Then the owner of the house became angry and ordered his servant, ‘Go out quickly into the streets and alleys of the town and bring in the poor, the crippled, the blind and the lame.’

“‘Sir,’ the servant said, ‘what you ordered has been done, but there is still room.’

“Then the master told his servant, ‘Go out to the roads and country lanes and compel them to come in, so that my house will be full. I tell you, not one of those who were invited will get a taste of my banquet.’”

The poor, the crippled, the blind, and the lame.

I have no idea what it is like to be any of these people.

Jesus clearly favored the down and out. Why is this?

Perhaps it is because these were the people who knew their need of God. That’s the dangerous thing about wealth, and health and security and independence and privilege and honor; they insulate us from staying in touch with our need for God.

We need to remember, Jesus is having dinner with people of status and honor. These remarks are addressed to them. He is telling people of privilege (like me and probably you) what following him looks like for them.

“When someone invites you to a wedding feast, do not take the place of honor, . . . But when you are invited, take the lowest place,”

But when you give a banquet, invite the poor, the crippled, the lame, the blind, and you will be blessed.

This is not charity he’s talking about. It’s not a handout he’s asking for. Jesus is calling us to invite them to our banquet—to treat them as our friends; to enter into relationship with them. Why?

The closer we get to these people who cannot help themselves the more we will realize they are fundamentally the same as us. The closer we get to them, the less we will be able to hide behind our theory that they they are getting what they deserve; which is another way of saying we are getting what we deserve. The more we come into touch with people in need of mercy, the more in touch we will become of our own need for mercy because we will come to realize that just as no person deserves to be poor, no person deserves to be rich either. At the core of the core, we are the same.

Jesus isn’t after a permanent welfare state any more than he is for the forced redistribution of wealth. Jesus is looking for the love of God to become the core and compelling reality of our lives. This love makes us humble and helpful which is another way of saying holy.

Why do we tend to subscribe to the belief and value system that people get what they deserve? How tightly do you cling to this? What would it cost to let it go?