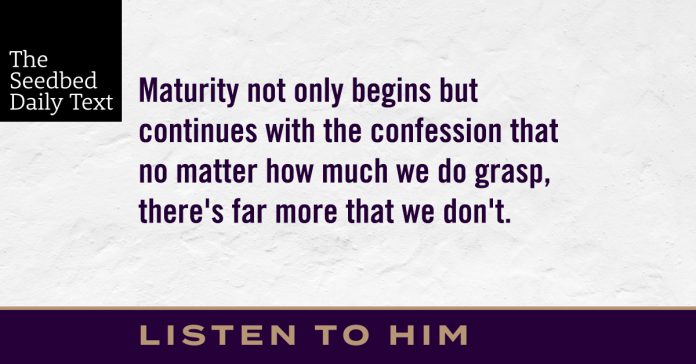 Jesus took the Twelve aside and told them, “We are going up to Jerusalem, and everything that is written by the prophets about the Son of Man will be fulfilled. He will be delivered over to the Gentiles. They will mock him, insult him and spit on him; they will flog him and kill him. On the third day he will rise again.”

The disciples did not understand any of this. Its meaning was hidden from them, and they did not know what he was talking about.

“Listen carefully to what I am about to tell you: The Son of Man is going to be delivered into the hands of men.”

But they did not understand what this meant. It was hidden from them, so that they did not grasp it, and they were afraid to ask him about it.” Luke 9:44-45

That happened weeks back just following the ascent to Transfiguration Mountain when we began this journey to the Cross.

You may have noticed over the course of these weeks that Jesus makes disciples in plain view of the public. He’s not sequestered off in some synagogue somewhere waxing eloquent before a captive audience. He’s teaching his disciples in the presence of the religious establishment. At times he will turn and address the Pharisees. At other times he speaks directly to a leper or a prostitute or a crippled person or like yesterday, a rich ruler.  Typically, though, it’s all happening at the same time in the same settings.

Very rarely does Jesus pull his disciples aside and address them privately. It is significant that he does so in both of these instances above and tells them the same thing. Even more significant is the way the disciples response has not changed at all despite all that has happened.

Despite the fact he made it crystal clear, the reality that Jesus is going to die is the furthest thing from their mind. It’s so easy with 1,962 years of hindsight to think it’s an open and shut case when it comes to our own understanding; to think we “get it.”

I think what I want to suggest is that “getting it” is a never ending process. Yes, we “get it” at some level. Speaking for myself only, I am increasingly sure that what I do “get” pales in comparison to what I don’t yet “grasp.”

This is the “Great Mystery”of our faith: “Christ has died! Christ is risen! Christ will come again!”

Come on. A God who dies? God and mortality just don’t mix. A God who “humbles himself?” God and humility just don’t mix. A God who becomes a human being? Those categories are mutually exclusive. So many of us have been around this story for so long it’s challenging to still see it freshly. I am beginning to think a mark of maturity in following Jesus is this: The further we follow him, the more we grasp the mystery, yet the more we grasp the mystery the more we realize the vastness of what we can’t comprehend.

So what if genuine growth and true maturity not only begins but continues with the confession that no matter how much we do grasp there’s far more that we don’t.

We haven’t been here. We haven’t done this. And we don’t have the T-Shirt. As we near Jerusalem and all that will unfold there, let’s begin praying for grace to hear with new ears and see with fresh eyes and behold with deeper humility this great mystery like never before. We’ve done Easter before, but not this Easter. Stay with it now, more than ever:

How about you? Do you really see that there’s far more to get than you’ve got when it comes to following Jesus, or is it just easy to agree with the sentiment? Are you following harder after him now or still just sort of?