How to Stop Talking About People - Seedbed
close
Menu 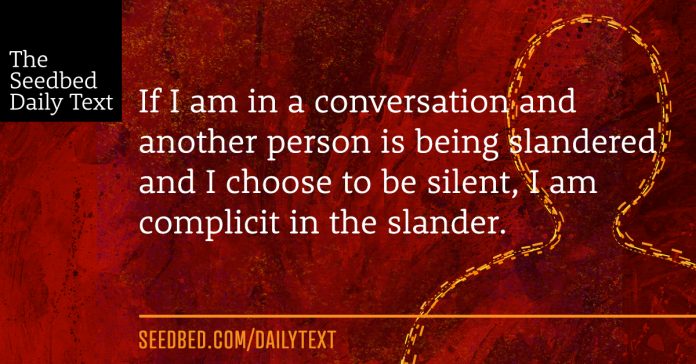 11 Brothers and sisters, do not slander one another. Anyone who speaks against a brother or sister or judges them speaks against the law and judges it. When you judge the law, you are not keeping it, but sitting in judgment on it. 12 There is only one Lawgiver and Judge, the one who is able to save and destroy. But you—who are you to judge your neighbor?

There’s the legal idea of slander which means speaking an untruth about another person which results in damage to their reputation or otherwise. Then there’s the biblical idea of slander which means to speak ill of another person. If I speak ill of you and it damages your reputation and you sue me in civil court there is a way out for me. I can prove that what I said about you was true. This is so often how we justify speaking ill of other people. We consider that what we are saying is true; hence it is not slanderous. We simply think of it as truth telling. Of course, there is the small problem of talking about people instead of talking to them, but the truth is the truth—right?

As best as I can tell, there is no defense for the kind of slander James references. Regardless of whether what you say about another person is true or not, to speak ill of them is to slander them. What is James’ rationale? For James, to speak ill of another person means to judge them, and for James (as for us) there is only one judge: God. To judge another person means to put oneself in the position of God. God, as the “law-giver,” is the only one capable of judging human beings according to it. The role of a human being is to simply be a “doer of the word” rather than judging other people on their doing or not doing of the word. When we step into the role of judging other people according to God’s word we step out of our role as a neighbor and usurp the role of God over them. This is wrong for anyone to do and particularly egregious when “teachers” do it. This is not a “shooting foul” for James. He seems prepared to eject someone from the game for slandering others.

So we are back to the issue of our words and their power to create or destroy. I don’t know about you, but this convicts me. In our day to day work, family and community life we can’t help but discuss other people. Sure, it’s a good practice to not speak of another person who is not actually present, but it’s just going to happen. We have conversations at work with our co-workers about our bosses and with our bosses about our co-workers. We quite naturally process our conflicts with other people by bringing others to our side to “discuss” them. Sure, there’s always the possibility of politely walking away from such conversations that are about a person who is not present, but I think there’s probably a more practical and reasonable approach.

Here’s the kicker. If I am in a conversation and another person is being slandered and I choose to be silent, I am complicit in the slander. My choices are to walk away or to defend the reputation of the person not present. The latter is the courageous choice. To defend a person’s reputation is not to somehow take their side in a conflict, it is to stand in their stead as a fellow human being and protect them from injury or harm. This is how to steer clear of slandering other people. In the end, the only way to stay out of the Judge’s seat is to protect others from being made to sit there.

God, our Father, I want to be a real Christian. Prick my spirit at the first impulse of slandering others. Give me the courage to stand up for those who are being slandered outside of their hearing. Help me to become the kind of person who graciously protects the reputation of those not present. In Jesus name, amen.

1. What is it in us that makes us want to jump on the conversational bandwagon when the subject of another person who is not present comes up?

2. Are you grasping the difference between talking constructively and objectively  about people in the context of every day life situations and talking about them in ways that damage their reputation? Remember, just because it may be true is no defense to sit in judgment.

© Seedbed 2021
How to Stop Talking About People
MORE STORIES