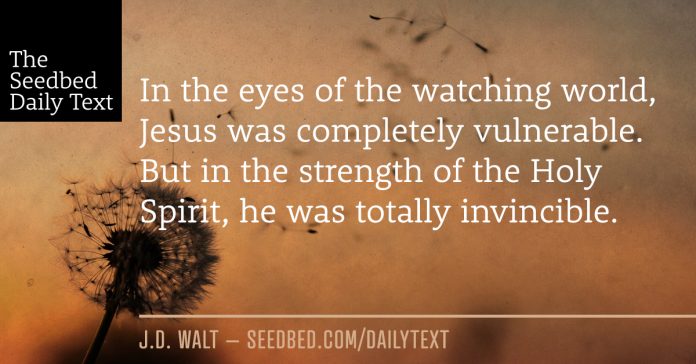 The next morning some Jews formed a conspiracy and bound themselves with an oath not to eat or drink until they had killed Paul. More than forty men were involved in this plot. They went to the chief priests and the elders and said, “We have taken a solemn oath not to eat anything until we have killed Paul. Now then, you and the Sanhedrin petition the commander to bring him before you on the pretext of wanting more accurate information about his case. We are ready to kill him before he gets here.”But when the son of Paul’s sister heard of this plot, he went into the barracks and told Paul.Then Paul called one of the centurions and said, “Take this young man to the commander; he has something to tell him.” So he took him to the commander.The centurion said, “Paul, the prisoner, sent for me and asked me to bring this young man to you because he has something to tell you.”The commander took the young man by the hand, drew him aside and asked, “What is it you want to tell me?”He said: “Some Jews have agreed to ask you to bring Paul before the Sanhedrin tomorrow on the pretext of wanting more accurate information about him. Don’t give in to them, because more than forty of them are waiting in ambush for him. They have taken an oath not to eat or drink until they have killed him. They are ready now, waiting for your consent to their request.”The commander dismissed the young man with this warning: “Don’t tell anyone that you have reported this to me.”

I could be describing a jihadist roadside bombing plot to assassinate a military general with an improvised explosive device in Baghdad. With a few tweaks, these facts could paint the picture of a gangster styled mafia hit in Chicago. Heck, take out the religious dynamics and it starts to look like the Jack Ruby “take-down” of Lee Harvey Oswald on live television.

The problem is I’m describing the state of affairs with the so-called “people of God” in first century Jerusalem. The bigger problem: these guys apparently had no idea that what they were doing was pure evil. It looks to me like everyone thought it was a good idea, except the Holy Spirit.

Something tells me Paul, despite being powerless and completely vulnerable, was back in those barracks suiting up. To the naked eye, Paul appeared like a defeated man, beaten up, locked down, and in the custody of the imperial authorities of the empire of Rome with no way out. Nothing could have been further from the truth. When we see the scene through the eyes of the Holy Spirit; which is to say when we see the unseen reality, the view is breathtaking.

Paul has on the full armor of God. He’s wearing the body armor and breastplate of the pure and undefiled righteous goodness of God. A belt of invincible truth holds it all in place. On his head we see the helmet of salvation. On his feet we see the gleaming power of peace. In his hand he holds faith that appears as an impenetrable shield of protection. In his other hand, something akin to the light saber of a Jedi knight, is putting off a form of Light so bright it can’t be looked upon. It is like a focused fiery light with the blinding luminosity of a welding torch. Yes! It’s the sword of the Spirit, the very Word of God.

I suspect if we could see what the Holy Spirit sees, we would behold legions of angels surrounding the perimeter of the barracks with 10x the rock-ready attentiveness of a South Korean soldier standing at the invisible border of the 38th parallel facing to the north.

Look again and you see him, the Lamb slain from before the foundation of the world, the Lion of the Tribe of Judah, the Son of God, Jesus Christ Himself, standing right next to Paul.

To the naked eye: completely vulnerable. In the eyes of the Holy Spirit: totally invincible. Complete vulnerability, a stripping away of everything not ultimately real, until there’s only the bare image bearer of God. Honestly, I think that’s what it requires to really put on the full armor of God.

Isn’t that a picture of the cross? In the eyes of the watching world: completely vulnerable.  In the strength of the Holy Spirit: totally invincible.

I think when the Lord said to Paul, “In your weakness, my strength is made perfect,” this is what he was talking about.

Invite the Holy Spirit to give you the capacity of a holy imagination to conceive of the bigger reality beyond the reality we perceive with our earthly eyes. What do you imagine you will see?