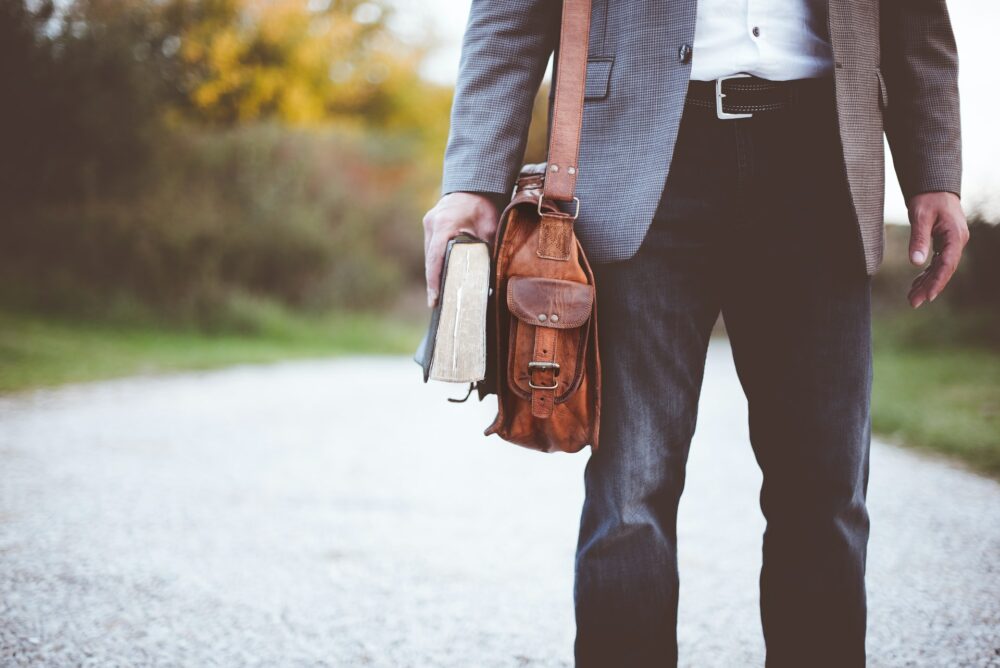 And he [Jesus] said, “The Son of Man must suffer many things and be rejected by the elders, the chief priests and the teachers of the law, and he must be killed and on the third day be raised to life.”
Then he said to them all: “Whoever wants to be my disciple must deny themselves and take up their cross daily and follow me. For whoever wants to save their life will lose it, but whoever loses their life for me will save it. What good is it for someone to gain the whole world, and yet lose or forfeit their very self? Whoever is ashamed of me and my words, the Son of Man will be ashamed of them when he comes in his glory and in the glory of the Father and of the holy angels.”

Given what views of the Messiah the Jews held at the time, Jesus had to take special care, even after Peter’s confession at Caesarea Philippi, to instruct his disciples as to just what kind of Messiah he would be. There would be no military victories in his name; no triumphal columns or monuments erected; the yoke of Rome would not be thrown off. Rather, the Son of Man would be rejected by religious leaders, those who claimed the mantle of God, who sat in the chair of Moses, and then Jesus would be murdered, but “on the third day be raised to life.”

After expressing this very sobering truth, which was helping to correct some of the mistaken views of the Messiah that lingered even among his own disciples, Jesus then turned his attention to what was entailed in discipleship, the cost of being a serious follower: “Whoever wants to be my disciple must deny themselves and take up their cross daily and follow me.” This verse must be understood in terms of the goal or purpose of discipleship, itself; in other words, with respect to what course of action or way of life would lead disciples to be just like their Master. Two counsels were offered by Jesus: first, disciples must deny themselves, forsaking any pleasure, any worldly good, that gets in the way (in the sense that it blocks the path) of remaining faithful to the Master. Second, disciples must not only forsake getting-in-the-way pleasures or goods, but they must also take up their cross daily, which indicates something more—they must be willing to embrace suffering, and not seek to avoid it at all costs, when it becomes necessary in order to remain faithful to Jesus.

Christ continued his teaching about discipleship with a puzzling declaration: “For whoever wants to save their life will lose it, but whoever loses their life for me will save it.” Notice that in this pithy statement we have two values being turned upside down. It looks like we’ve just entered an inverted world. Saving will result in loss. Loss will result in saving. What could this possibly mean? The key to unlocking the wisdom of this teaching is found in the two little words, “for me.” Here we have two distinct paths laid out: the first one, which is marked by autonomous self-concern and is alienated from Jesus, will result in loss. The second one, which is marked by surrendering autonomous self-concern and being properly related to Jesus, will result in being saved. In short, Jesus was teaching his disciples that being in a proper relationship with him was the most important thing of all.

If we bring this wisdom of the preceding verses to the next one of our text—“What good is it for someone to gain the whole world, and yet lose or forfeit their very self?”—we realize immediately that by gaining the whole world Jesus was not simply referring to material things or stuff. He was also referring once again to relationships, a truth that, as we will see, will be borne out in the remainder of our text. The word world in this passage means not only “the whole of everything created by God,”1 which includes material things, but it also embraces a “realm of existence, a way of life,”2 indeed, a network of persons and relationships that are unfortunately hostile to God. This, too, is what it means to be worldly.

[[Get the book Jesus the Stranger from our store here.]]

Most Christians in the world today are neither rich nor is the allure of wealth their chief temptation. The rampant consumerism of the West does not play out in the same way in the two-thirds world. One of the major challenges, then, for both rich and poor Christians today is indeed a worldly one, but it comes from another quarter, one that Jesus addressed as well: “Whoever is ashamed of me and my words, the Son of Man will be ashamed of them when he comes in his glory and in the glory of the Father and of the holy angels.” Here the worldly challenge comes in the form of relationships, of sustaining networks of associations in terms of acceptance, recognition, belonging, approval, and even honor, which if they are cut off can lead to great and deep suffering, even at times to a loss of livelihood.

The poor, like other people, are situated within communities of family, friends, workers, and other key relationships which, if they are cut off through the loss of social approval, can have greater consequences for them than for the rich since the poor are so heavily dependent upon these connections. Nevertheless, the middle class as well as the rich may feel the power of these same large social and cultural forces, along with pressures to conform, with the result that, like the poor, they, too, may be tempted to deny Christ in order to get along, to fit in, or to preserve some supporting relationships in any number of social environments. So, then, the warning that Jesus gave to those who would be his disciples (“whoever”) belongs to all, to both rich and poor. To be sure, being ashamed of Jesus, the threat of selling out, of denying Christ, for the sake of some social good is a universal temptation. After all, who wants to be rejected? Who wants to be left out? Who wants to be shunned?

The dynamics of being ashamed of Jesus within a particular social setting and then ultimately denying Christ or selling out can be expressed in terms of two competing narratives or stories with a number of important transitions. When followers of Jesus first begin to feel shame in the presence of a particular group (family, work, or university setting, for example), the story or identity of that group, which is alien to Christ (that’s why they’re feeling the shame), is now beginning to take hold in their hearts and minds. This new narrative, which is often defined in terms of politics either from the left or the right, is celebrated and sustained by powerful social and cultural pressures and well-traveled pathways that often lead to conformity. Oh, these believers, at this stage of their descent, will still define the good in terms of Jesus and the gospel story, though they are now increasingly reluctant to share many of their beliefs in this new and challenging setting. They want to be more tactful, more appropriate, as they put it. Most often, they’re just simply silent.

As they remain in this by now increasingly threatening environment, they start to define the good not really in terms of the gospel any longer but in terms of the new narrative, often a partisan political one, by convincing themselves, with various levels of self-consciousness and self-deception, that this is what it really means to be a follower of Jesus. They may take considerable pride in this transition, and boast of it, since other believers, the common lot in their view, lack such great and profound insight. They may even begin to look down upon some Christian believers, those who remain faithful to Jesus.

At this point, for those who are on this downward spiral, their faithlessness is now complete. How is this so? In short, the gospel story has been displaced by another narrative whether it be a social, cultural, or political one. The gospel has been switched out. This can happen slowly, incrementally over time, with the support of newfound friends along the way, with smiles and affection, or it can occur rapidly almost like a conversion. If such folk remain in the institutional church, and some will not, they will continue to use the language of Christ, grace and salvation, giving evidence of their own self-deception, but it doesn’t matter anymore. Everything has been redefined in terms of their new, preferred narrative that now rules the day. When this happens, the words of Jesus can only be foreboding and disturbing: “the Son of Man will be ashamed of them when he comes in his glory and in the glory of the Father and of the holy angels.”