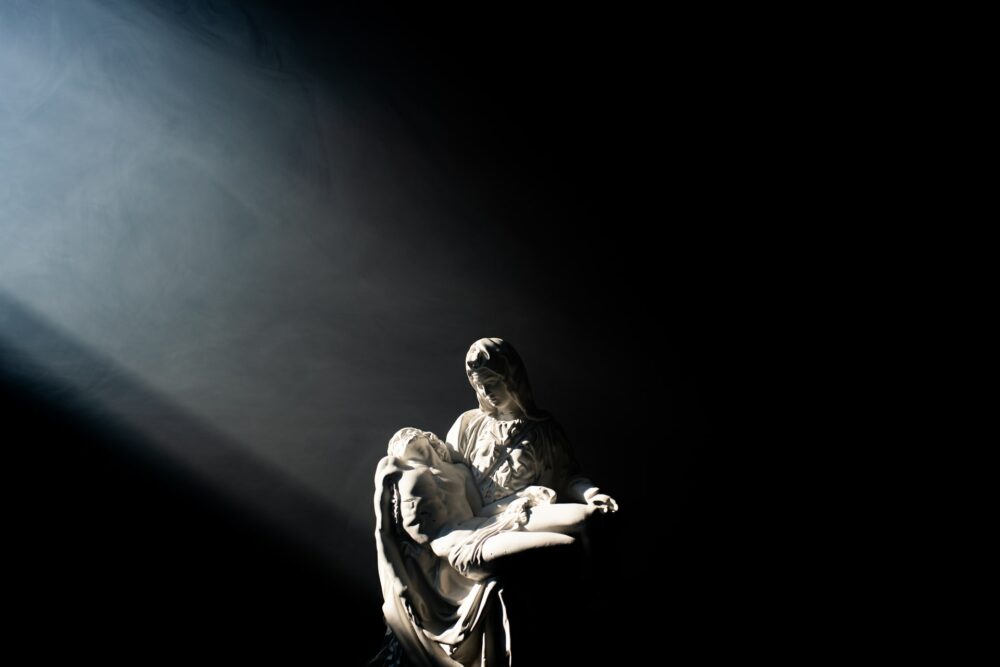 And the teachers of the law who came down from Jerusalem said, “He is possessed by Beelzebul! By the prince of demons he is driving out demons.”
So Jesus called them over to him and began to speak to them in parables: “How can Satan drive out Satan? If a kingdom is divided against itself, that kingdom cannot stand. If a house is divided against itself, that house cannot stand. And if Satan opposes himself and is divided, he cannot stand; his end has come. In fact, no one can enter a strong man’s house without first tying him up. Then he can plunder the strong man’s house. Truly I tell you, people can be forgiven all their sins and every slander they utter, but whoever blasphemes against the Holy Spirit will never be forgiven; they are guilty of an eternal sin.”
He said this because they were saying, “He has an impure spirit.”
(Mark 3:22–30 NIV)

Jesus had been ministering in the general area of Galilee, and he cast out an impure spirit in the town of Capernaum. This healing, in conjunction with others, and with the teaching of Jesus clearly on display in the local synagogue—all of this created astonishment and wonder among the people. Not surprisingly, news about Jesus spread quickly throughout the region and crowds began to follow him.

Jesus had sparked such interest among the people, both near and far, that the teachers of the law, also known as scribes, got wind of it and decided to make the three-day trip from Jerusalem to Galilee. Perhaps they were representatives of the Sanhedrin who were now curious or maybe even a little bit jealous. We don’t know for sure. At any rate, these scribes from Jerusalem, unlike the crowds, were singularly unimpressed with the signs and wonders that Jesus had brought about. Such miracles simply left them cold and with a very critical spirit. In their minds, at least, Jesus was likely a magician of sorts who was fooling the masses, a view that emerged much later in the writing of the Babylonian Talmud in the sixth century AD.

Even before speaking a single word with Jesus, the scribes from Jerusalem were ready to pronounce their judgment on both him and his ministry—and it was harsh. First of all, they claimed that Jesus was possessed by Beelzebul. The exact origin or etymology of this odd-sounding word is difficult to determine. It could possibly refer to the Canaanite deity Baal in which Baal-Zebul would then refer to the “lord of the house or temple.” (see James A. Brooks, Mark, vol. 23, The New American Commentary, 75) In any event, our current passage shows us at least this much: the scribes, themselves, associated Beelzebul with “the prince of demons,” and Jesus apparently identified it in his subsequent parable with Satan. Either way, this was very bad company indeed.

Second, the scribes contended that in his ministry Jesus was employing “the prince of demons” as his major instrument or tool to drive out the lesser demons. The Gospel of Matthew, unlike Mark, records the likely incident that led to this mistaken judgment: “Then they brought him a demon-possessed man who was blind and mute, and Jesus healed him, so that he could both talk and see” (Matt. 12:22). The people who witnessed this miracle were so astounded that they exclaimed, “Could this be the Son of David?” (v. 23). But the scribes would have none of this.

Evil persons, revealed through the ongoing manifestation of prejudice or animosity, have little to do with the truth. Operating out of a strong aversion and a commitment to ill will, such persons not only fail to see what light is right in front of their eyes—such that they become, in effect, blind—but they also involve themselves in embarrassing contradictions that render their judgments both confused and ultimately worthless. As a careful thinker, Jesus naturally picked up on all of this as it played out in the contorted reasoning of the scribes.

What’s so unexpected about the reply of Jesus to the religious leaders is that he took a very pastoral, indirect, and even a non-­defensive approach to them. For example, Jesus could have started out with himself in a very defensive posture and complained: “How dare you say such things about me!” “Who are you to say that I am possessed by Beelzebul?” “Don’t you know who I am?” or “Don’t you realize who my Father is?” Jesus, however, did none of this. Instead, he took up the accusation of casting out demons by the prince of demons. Sensing something of the great emotional distance between himself and the scribes on this allegation, Jesus offered an analogy as a bridge through which the religious leaders could realize the grave error entailed in their own thinking along with its mistaken judgments.

Now consider this: the scribes had already acknowledged that Jesus was, after all, casting out demons; there’s no argument here. Moreover, after the initial stages of the reasoning of Jesus, in the form of an analogy, the religious leaders should have understood that Satan cannot cast out Satan. It’s absurd to think so. If that’s the case, then the next obvious question would be: “Who, then, is actually casting out the demons?” Jesus continued the analogy so that the scribes could learn this truth for themselves. It is the one, and only the one, who ties up the strong man and then plunders his house. Who does this tying up and plundering? It is none other than Jesus. The Gospel of Matthew’s account of this same incident is revealing: “But if it is by the Spirit of God that I drive out demons, then the kingdom of God has come upon you” (Matt. 12:28). The scribes had conjured up the kingdom of Satan in their imaginings. That’s all they saw. Jesus’ actions through the Spirit of God brought about the kingdom of God, not as some imagining, but in reality. It’s difficult to draw a stronger contrast.

In the earlier chapters of the Gospel of Mark, Jesus had already exercised great authority that underscored his divine nature. For example, he not only forgave the sins of the paralyzed man as he healed him (Mark 2:5), but he also proclaimed that “the Son of Man is Lord even of the Sabbath” (Mark 2:28). In a similar vein, Jesus subsequently affirmed in our present passage that all sins and blasphemies (or slanders) can be forgiven humanity with but one exception. That affirmation itself is wonderful news for anyone who has ever suffered under the heavy burden of guilt. What, however, is that one exception that has no forgiveness? It is only the blasphemy against the Holy Spirit that constitutes an eternal sin.

Throughout the history of the church, some have suffered needlessly in thinking that they have committed this unpardonable sin. However, the mere fact that they are concerned about this matter, that their consciences are troubled or even on fire, so to speak, is a sure sign that they have not committed this sin at all. Indeed, this is not a common sin but a very rare one. It entails identifying the Holy Spirit as evil. That’s a terrible thing to do; in fact, it’s downright wicked. Since the Holy Spirit is the one who leads sinners to repentance, then that possibility is now cut off. Notice, however, it’s not because God does not want to forgive sins. God remains loving and desires the salvation of all (1 Tim. 2:4). It’s because those who commit this grave sin don’t want to receive the forgiveness that is so graciously offered through the ministrations of the Holy Spirit. If that same Holy Spirit is rejected at the outset, called evil, then how could forgiveness ever be received? It’s a nonstarter. In such a case there is no hope; there is only despair.

Once again, however, Jesus surprises us. He responded to the scribes because they had been claiming that he had an impure spirit. Did Jesus condemn them? Did he curse them? No, instead Jesus, like a good physician, cautioned them strongly. He warned them of the grave danger entailed in attributing to the very Spirit of God what could only pertain to Satan. Sometimes it is what we judge to be the simple things that are actually the most important of all. It is ever a mark of honesty, abundant sincerity, and deep spiritual wisdom to be able to call the good, “good” and evil, “evil.” In fact, it takes great courage to do so especially in a corrupted age, one oriented toward lies.