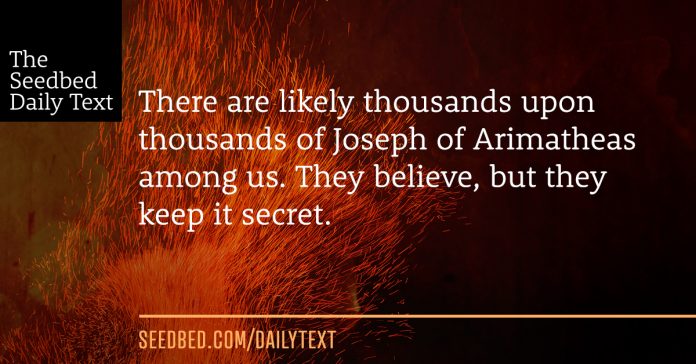 42 It was Preparation Day (that is, the day before the Sabbath). So as evening approached,43 Joseph of Arimathea, a prominent member of the Council, who was himself waiting for the kingdom of God, went boldly to Pilate and asked for Jesus’ body. 44 Pilate was surprised to hear that he was already dead. Summoning the centurion, he asked him if Jesus had already died. 45 When he learned from the centurion that it was so, he gave the body to Joseph. 46 So Joseph bought some linen cloth, took down the body, wrapped it in the linen, and placed it in a tomb cut out of rock. Then he rolled a stone against the entrance of the tomb. 47 Mary Magdalene and Mary the mother of Joseph saw where he was laid.

He asked for the body of Jesus.

He was an ordinary Joe. You know the type; good citizen, tither, respected member of the Council, a leader people looked up to. If Joseph of Arimathea was on board you could trust the deal was legit.

He had a solid reputation as an upstanding citizen. Why on earth was he stepping out of the crowd now, approaching the Governor and asking for the body of this crucified peasant.

Joseph had no idea Jesus would be raised from the dead. No one did. Joseph, we are told, “was himself waiting for the Kingdom of God.” In John’s Gospel we get this little bit of information:

Now Joseph was a disciple of Jesus, but secretly because he feared the Jewish leaders. With Pilate’s permission, he came and took the body away. He was accompanied by Nicodemus, the man who earlier had visited Jesus at night. John 19:38-39.

Joseph and Nicodemus were “secret” disciples of Jesus. Why did they keep it secret? They were filled with the fear of their peers. If ever there were a moment to walk away and admit he had been wrong it would have been this one. The secret would have never been known. He and Nicodemus could have gone back to life as they knew it.

Something must have clicked with Joseph. He probably watched in horror as his colleagues mercilessly heaped shame and scorn on this man he secretly followed. Something rose up in him and said, “Enough!” I bet he wished he had stood up to them long before. He knew what he had to do now. There’s a little word in the text today that signals a departure from business as usual for Joseph of Arimathea. Did you catch it? The word is, “boldly.”

Joseph, we are told, “went boldly to Pilate and asked for Jesus’ body.”

Joseph finally went public with his faith, when he probably thought it was way past too late. Imagine his exuberant delight when he discovered he had been right on time.

My hunch is there are thousands upon thousands of Joseph of Arimatheas among us. They believe, but they keep it secret. Why? Mostly, they fear what other people will think; that they will be labeled some kind of “religious” fanatic or an unapproachable “holier than thou” type or one who wears their religion on their sleeve. It’s just easier to wear two hats; one with the “Christian” friends and another one with the everybody else.

I remember being that guy. I considered myself a believer, but I’m not sure you would have had any idea of it. Looking back, I don’t consider that I was a hypocrite. It’s just I lived in different compartments depending on which world I happened to be in. Somewhere along the way, I stepped out of that secret life and I “went boldly.” I’ve never looked back.

It’s always kind of fun to see secret followers of Jesus happen to find one another out. It usually takes whatever level of relationship they had before to the tenth power. Imagine what it was like when Joseph and Nicodemus found each other out. It’s awe-inspiring to see these two secret disciples finally come out into the light as the sun set on that Good Friday.

Spirit of the Living God, fall afresh on me. Lord Jesus, forgive my timidity—o.k., my cowardice. I care too much what others may think. I don’t want to be proud. Teach me what it would look like for me to be bold–even a small step of bold faith today. Melt me. Mold me. Fill me. Use me. For the glory of your name, Jesus. Amen.

This world is in great need of awakening, while the Spirit searches for the ones who will sow the seeds. Will you become a sower with us this #GivingTuesday?

When you give to Seedbed today, you’re sowing for a great awakening, by connecting and resourcing the change-makers in your community. Give today!